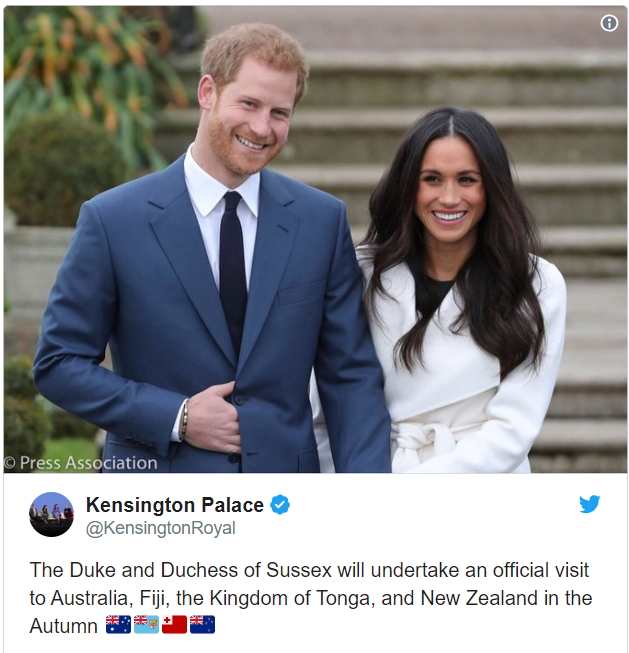 I am sure you will be aware that Prince Harry and Meghan Markle are touring Australia and various other places at the moment. Yesterday they arrived in Tonga.

I have no idea why this skit from D-Gen The Late Show has stuck with me all these years, nor why I still find it so hilarious now. But this was the first thing I thought of when Tonga was mentioned. 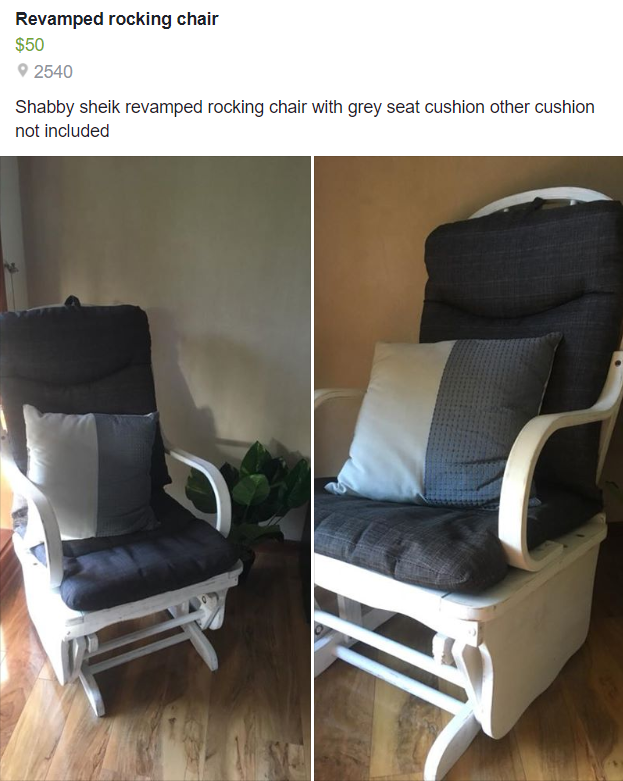 1. I don’t think that word means what you think it means. Hello, you are ON THE INTERNET, use the dang thing to find out what that word means before you post it to the general public!

2. Is the cushion surgically attached? No? Then why don’t you take it off before taking the photo, then you don’t have to tell people it is not included.

I guess Shabby Sheik is better than Shabby Chick. :)

I have never had an urgent need for a rabbit. Have you?

Furniture. That is the word you were looking for.

Though I see you found it for the group description! 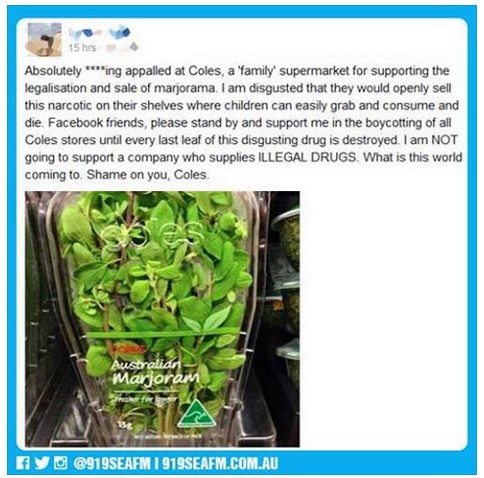 Marijuana. That is the word you are looking for..

That facebooker might be shocked to know that Coles also sell ice.

Plus, Woolworths stocks these items as well!
What is the world coming to? OH THE HUMANITY! :) 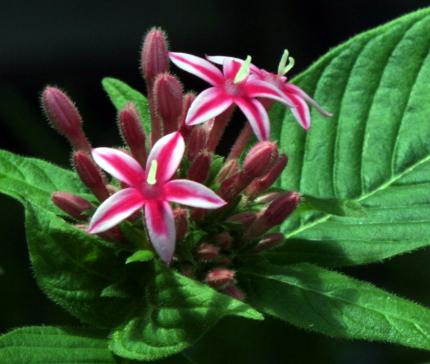 This post has been sitting in my drafts folder since November 2014 and I finally got around to completing it. I love me an internet generator! Here are some of the more awesome ones –

Goth-O-Matic – my all time favourite generator – create your own darkly gothic poem! You get to choose from drop down options.

Meme Generator – With built in images and characters.

Internet Anagram Server – ever wonder what other words can be made out of your name? Use this generator to find out. :)

Strong Random Password Generator – if you need some new passwords this generator can help out.

Random Number Generator – need to draw a prize or choose your next lotto numbers?

Harvard Referencing Generator – This generator is super useful for those writing essays that need references.

List of Text Generators – want more generators? This is a good place to start. There are quite a few Haiku generators listed here. :)

Recently here on the blog, we have seen a lot of very serious scam posts. However, I will like you to know that baiting the scammers can be a fun thing as well..

A Journey Along The Road To Stopping Online Scammers

I might consider doing this again – it has been a while since I’ve done much fun scambaiting stuff. ;)

funny, internet, looking back, scambaiting, Who Is Snoskred
4 Comments Posted on January 9, 2015June 1, 2015 by Snoskred

Recently I was reading So Anyway…. by John Cleese.

The book was a fantastic read and there was much silent giggling from me because I like to read before going to sleep, and the other half likes to just go to sleep.

The trouble with silent giggling, while it is silent, it has a great tendancy to shake the entire bed. I tried very hard to control myself, but there came a section of the book where I totally lost any ability to keep it together, and twas so bad, the other half half-woke, looked at me, and mumbled something like he dreamed there was an earthquake. Oh, there was an earthquake, all right!

I covered my mouth to prevent an explosion, and I had to quietly and quickly leave the room. I sourced a pillow to giggle into, and the giggling continued for a multitude of minutes, until I got the hiccups.

I hope that John Cleese would not mind my quoting the section which caused an earthquake in the other half’s dreams. There are sections in the book which are even funnier but something about this one really got me giggling. Here tis –

When I got back to London I was contacted by my old Cambridge friend Alan Hutchison, who had just returned from a long trip abroad that had taken him to places as far-flung as Japan and South America.

Alan’s travels had proved far more exotic than mine. At one point, after spending some time in Tokyo, he had decided to visit areas where Westerners had not yet trod. Realising that from now on his English was going to get him nowhere, he asked a fellow traveller to teach him the Japanese for ‘I’m sorry to bother you, but could you tell me where I could find accommodation?’ Then he set off.

Immediately the weather turned against him: rain bucketing down, thunder and lightning, the full works. Fortunately, a few rather small dwellings came in sight, so he approached one, knocked, and when the door opened, repeated his Japanese phrase. The householder looked very surprised, gathered himself, smiled, bowed three times and closed the door.

Mystified, Alan decided to try again at the next cottage, with the identical result. By now he was soaked to his skin but since he had no Plan B all he could do was to keep on and on, repeating the scenario, until at last he found a woodshed where he spent the night.

The next day, to his relief, he stumbled on a Japanese-style youth hostel, where the owner spoke some English. Alan asked him if he would translate into English the phrase that he had so carefully learned. The owner agreed, listened and explained that it meant ‘May I take this opportunity to wish you goodnight?’

How dismaying it must have been for those poor people to have been roused from their beds, to find, standing at their front door, towering over them, the first non-Japanese being they had ever set eyes on, a creature probably of aquatic origin, and moreover one who had chosen to make a special excursion to their home in the midst of this torrential downpour, simply in order to wish them goodnight.

In fact so implausible must this have seemed, that, as they lay tossing in bed, these Japanese can have only come to the conclusion that extraterrestrials were busy reconnoitring their neighbourhood, and, under the cover of offering blessings and asking, ‘May I take this opportunity to wish you goodnight?’, were estimating the strength of their defences. It says much for the legendary politeness of the Japanese that they did not band together to hunt Alan down with hoes and pitchforks.

I sincerely doubt John Cleese would find my little blog, but if he did I would like to say thanks for all the laughs. Out of all the laughs I have had in my nearly 40 years, I would have to say that at least 20% of them have originated from Basil Fawlty. It does not matter how many times I watch the show or how well I know the lines, I still enjoy it just as much as the first time I saw them, possibly even more so. I have loved Fawlty Towers since I was a child, and I will always love it.

I have given the gift of the Fawlty Towers box set several times and on each occasion it was a case of my giving a gift I really wanted for myself. Somewhat bizarrely, I still do not own it, nor do I have a digital copy of it. The pay TV channels here are extremely generous in replaying it so regularly I can always seem to catch an episode when I feel like a laugh.

Of course I loved Monty Python too, and I have enjoyed everything I have ever seen John Cleese do. This book is a lovely addition to my book collection. I highly recommend So Anyway…. I greatly enjoyed it. :)

So I bought me a little friend at Costco.

This is Carter, my skeleton friend. 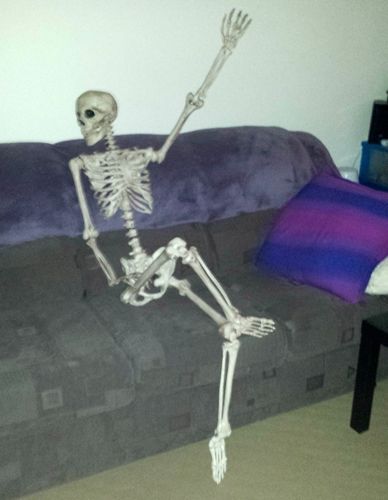 Back when I was getting along with everyone at work, and when I was doing the overnight shift, Carter spent a few over-nights sitting out in my car. It was hilarious because people would suddenly notice him as they were walking past my car, and let out bloodcurdling screams, or perhaps do a little freak out jump.

As we were driving back from JB Hifi where I picked up seasons 3 and 4 of NYPD Blue, I saw a bunch of cows standing on the top of a hill, very near to a cliff and the ocean. I said to The Other Half –

“What happens if a cow falls off the cliff into the sea?”

“It makes a big splash.”

Well, I was more wondering if cows could swim, but technically I guess he’s right.. ;)

This just in from one of my scammer friends – apologies if anyone is offended. However he did spell all the swear words incorrectly, so probably it’ll make you laugh instead. I know it put a big grin on my face. ;)

Don’t you have any cense in that dik head of your that you do not talk to people like that, if you are sure you have made any payment idiot go to the bank and demand a payment slip and a tracer for your payment, you always have the time to send emails and talk sheet but you do not have the time to go to the bank,I noticed you are an Ashole your self and must be a big Fool to call me an ashole dik head, just get to the bank and make the payment slip available stupid.I gave you a specific instruction and you can not follow up, so when the contract sum gets to your account you will start talking sheet from your sheet hole, dic head. Pay out the money and stop making a fool of your self.

Your Grandmother can rout for all I care, this a our deal and you must do as I say, or I put a trace on your sorry ass.

Well, why wait to start talking sheet? ;) Personally I like 500 count Egyptian cotton, but flannelette is good in winter. And let us not get into satin!

So let’s talk sheet! What is your personal favourite?