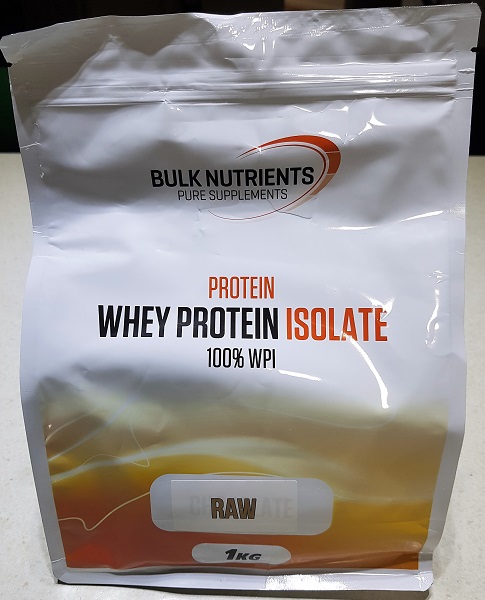 I’ve been buying Whey Protein Isolate in bulk from Bulk Nutrients since 2016 now. The quality is excellent. I get the raw flavour AKA totally unflavoured because I like to add my own flavours to my shakes, and if you get raw protein you can add it to soup without even blinking. Yes, soup. Sounds crazy? It actually isn’t, though I suspect I am one of the few people on the planet who do this.

I bought 5kg of protein in December 2017. One serving of protein is 40g though sometimes I use a little less depending on how active I have been and how long it is till my next meal. My protein shake is very filling so if I have left my shake a bit late, I will not be hungry enough for dinner unless I cut down the amount of protein to 30g.

I should have got 125 days of protein out of this last order, right? However on weekends we often both have a shake, which muddles up the maths. There is now a new variable, which is The Other Half having protein shakes for lunch at work. It would be fine maths wise if it were X days a week. But it never works out that way.

What I usually do is wait until I open my last 1kg bag and make another order of 5kg. But this time I did a little maths first.

It costs me $7 flat rate shipping no matter how much I order. Also when you buy more, the price is slightly cheaper. Here is a quick table. OMG listen to me doing maths like I like it! ;)

We’ve worked a rough calculation for how many protein shakes The Other Half might have, and essentially we think this is enough protein for the two of us for 250 days. If that turns out to be correct, I will next need to order protein in December 2018, but I might be able to make it to January 2019, because I only just opened the final 1kg bag from the last order. 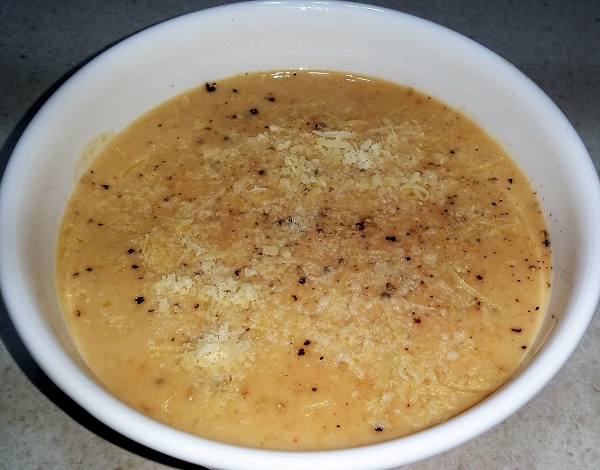 If you do a quick google there are not a lot of places talking about adding protein powder to soup, so it is not Officially A Thing. But I did it all last winter and it worked out great for me. With my present thyroid issues I really feel the cold so a shake with frozen stuff in it is not the most optimal for me on very cold days. 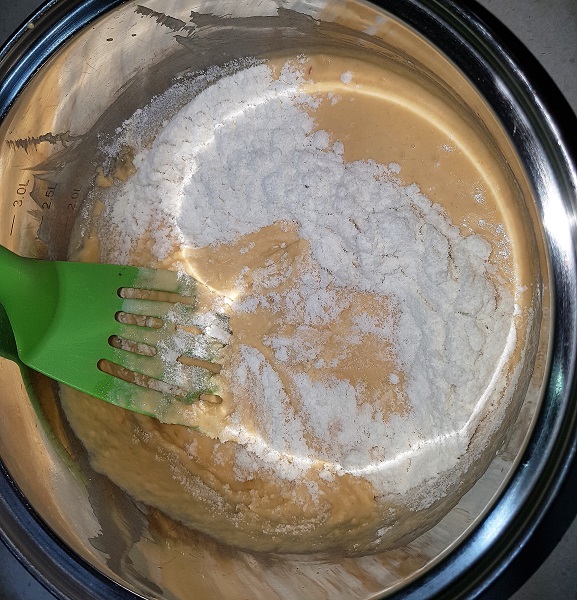 It works best in soups you have whizzed up to a creamy consistency. You do need to stir it in well – whisking might work best but I just use a spatula and stir like a person possessed. You could also use a immersion blender, like the Thunderstick. 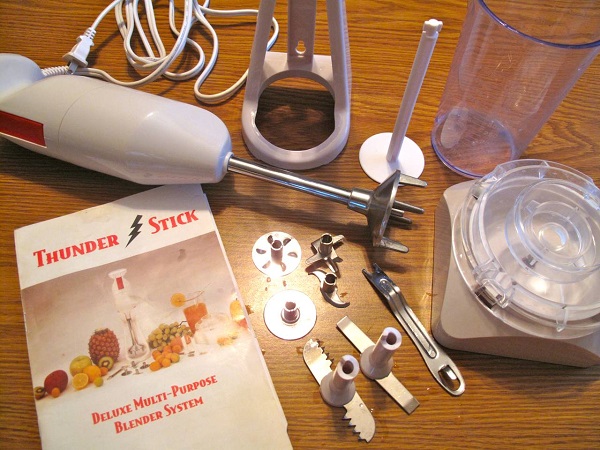 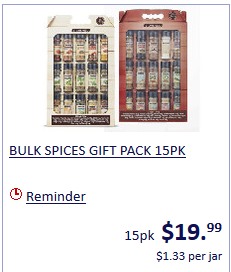 Twice a week, I receive my email from Aldi that tells me what the upcoming specials will be. On the 9th of April I spied with my little eyebulbs spice sets. I used the Aldi system to send an email to The Other Half about this and I said if they were still there the next time we shopped I would like to get them.

With Aldi you are taking a huge risk if you do not go on the day something is advertised to arrive. These spice sets were due to be out Wednesday the 15th of April and we did our fortnightly shop on the 12th of April, so our next shopping trip was not due until the 26th of April.

I did not make a special trip, I just hoped they would still be there. And as it turned out, there were some left.There are 30 spices in all – 2 packs of 15 and not a single double up which makes for great variety. 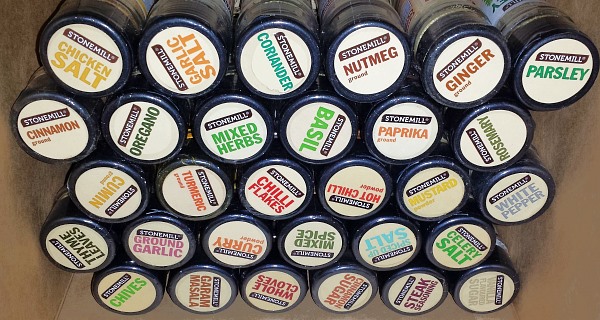 Luckily, due to my recent meat buying of some very cheap but excellent chicken breasts plus Aldi have been selling larger bulk cuts of steak which we have bought, cut up, and foodsaved at half the price we normally pay for those same cuts, this week we did not have to buy any meat at all. Not even bacon. I have 2kg diced up and stored in the freezer in perfect amounts for cookery.

So there was room in the budget to buy these spices and I am deeply thrilled to have new combinations to try out with our regular meals.

I did a chicken and bacon pasta on Monday. When I put in the garlic, onions and leek, I added some garlic salt, chives, basil, parsley, white pepper and nutmeg, plus cinnamon and paprika which I always use. The results were truly epic, in particular the chives, white pepper, and the garlic salt gave it a nice kick.

I rarely add salt to our meals when cooking them as The Other Half has high blood pressure, though I do keep a Himalayan Pink Salt grinder handy for myself to use on the completed food if I feel like it. That was also purchased at Aldi. :)

The dinner I made tonight, well, there was a spice incident. I was making vegetable soup and I had in mind a soup Vilis Cafe used to cook which had a lot of awesome Hungarian pepper in it. I keep a jar of Chili in the fridge and I’d added some of that, plus some cayenne powder, and then I went to add white pepper and more flew out than I’d intended.

When the soup was done cooking, I took out a potato and ate it while I waited for The Other Half to return from the mancave. It wasn’t very spicy to be honest, and I was wondering where all my spices had gone. Well, somewhere in the whizzing the soup process, those spices came out to play, and even after adding cream and cheese, my eyes were watering with every mouthful, my lips were burning..

I went in to the other half and said I thought maybe I had gone too far with the spices, and he wholeheartedly agreed. I love it spicy but this was a bridge too far!

So if you have an Aldi, you might want to keep an eye out for the spice sets next time you visit. They are excellent value – the spices Aldi regularly have in stock sell for $1.99 per container, and here you get them for $1.33 per container. Some of these spices are rarely seen at Aldi, though sometimes they do have a few flavours as special buys.

Let me know in the comments! Also let me know if you know any special powers these spices are known to have. For example, Turmeric is said to be excellent for your eye health. I add it to things quite often now – I love the colour – and I do notice a reduction in those eye floaters. 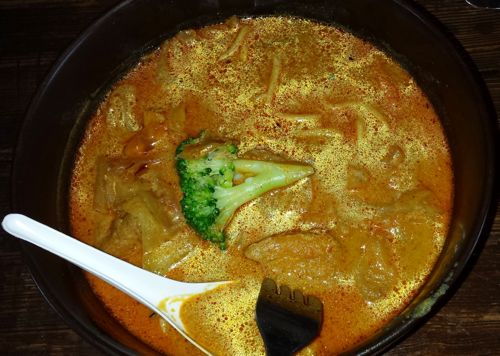 Today is the second day of Autumn here in Australia.. Therefore you might want to make some soup. I know I will be!

Here is my Roasted Red Capsicum & Potato Soup. Also for this recipe, you could use any vegetables you like. Roasted Leek and Potato is on my to-do list this season..

Here is a great post – 50 Light and Healthy Soup Recipes

There’s a new soup available on the refrigerated shelves of my supermarket, people. I bought one a couple of weeks ago and it sat in the fridge while I ate all the other meals – it was there just as something for me to try when I ran out of other stuff. And last night was the fateful day that I ran out of other things to eat, and decided to give this soup a try.

I was stunned by soup. I’m not kidding. It is literally that good. I was so stunned that I went back to the supermarket today and bought more – and also got several different flavours.

For those of you unfamiliar with the Seinfeld episode re the soup nazi, here you have it.

Those of you in Aus, keep an eye out for it. It’s at Coles here, and worth trying. I had the Pumpkin yesterday and today the Leek and Kumara (sweet potato).