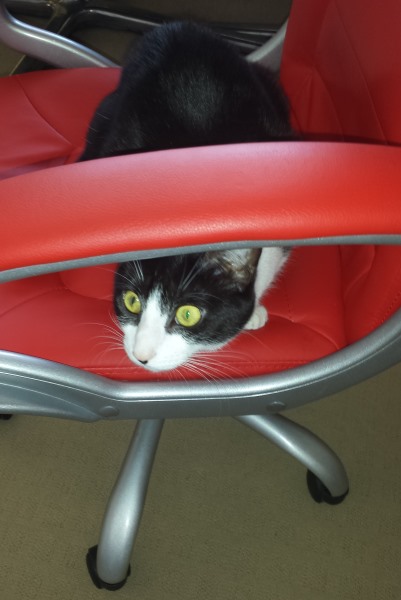 So, here’s a quick and somewhat hilarious arachnid story.. without images because I don’t want to see pictures of an eight legged creature and neither do you. :) I’m putting it behind a read more for the arachnophobes. :) Click through to read it.

END_OF_DOCUMENT_TOKEN_TO_BE_REPLACED 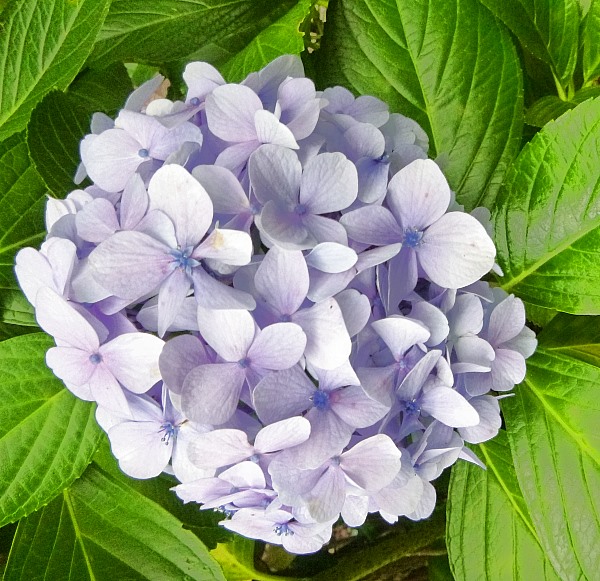 Would you fertilize your garden with human poop?

Neither would I. But in some countries, this is the done thing. They even have a name for it. They call it Night Soil. I first read about night soil a few months ago while reading Outliers by Malcolm Gladwell.

Rice has to be fertilized repeatedly, which is another art. Traditionally, farmers used “night soil” (human manure) and a combination of burned compost, river mud, bean cake, and hemp and they had to be careful, because too much fertilizer, or the right amount applied at the wrong time, could be as bad as too little.

And unfortunately some of those countries are now importing foods into Australia, and we are eating these foods sometimes without being aware of it due to poor food labelling laws.. How many times have you seen something like “Packed in Australia using imported products” – imported from where? 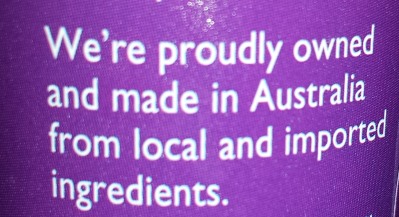 They don’t tell us.

That picture above is from the label of my favourite salad dressing. Why do they need to import ingredients? Everything they use in this product is available right here in Australia.

How is it, that I now cannot buy a tin of grown in Australia Champignons? I’ve tried all the supermarkets. There are no champignons grown here anymore, not that I can find. 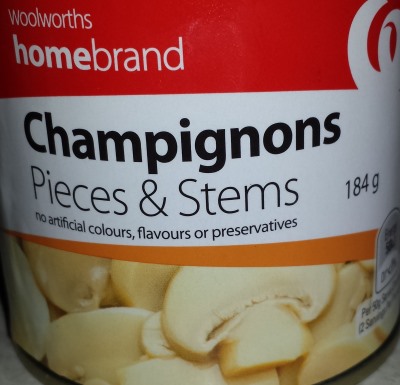 Check the label, and you will see – 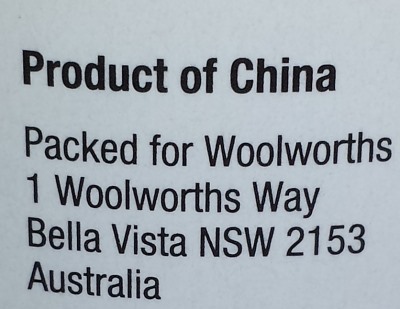 I grew up in a household where we always used champignons on our homemade pizza. I grew up eating champignons right out of the tin. I can tell you how they tasted when they were grown in Australia – like someone took a huge bunch of mushrooms and removed their essence, their flavour, and packed it into each and every champignon. I actually preferred them to fresh mushrooms.

These Chinese champignons taste like nothing. There is *no* flavour. You might as well eat the paper on the tin.

And now, several Australians have contracted hepatitis A from frozen berries.

Could this be due to night soil? Nobody knows as yet. But you better believe I’m not buying any more products which are grown overseas. Why would we allow products from countries you need to get vaccinations to visit?

And why on earth would we allow product labelling that does not tell us where the food originates from?

And take a good look at the labels. Do you have any products which say Product of Australia? Or does everything originate from locations you personally would not travel to, let alone eat food from!

Today is my nephews 16th Birthday..

I sent him a Happy Birthday SMS, as you do.

I just got a SMS back.

You’ll find me in the corner, rocking back and forth with my hands over my ears, quietly chanting NOES NOES NOES..

Today seems to be Day 109 of the evil flu from hell, though I know it cannot truly be that long. Time is passing so slowly in this unwell state of being. The little things are beginning to irritate. This is going to be a rare negative post. Normally I try to keep the positive on here at the blog.

Bear with me. I support ya’all when ya’all snark it up from time to time, so support me in my snarkiness. ;) And then at the end I talk about politics, which ensures this will be a post everyone will hate.

Houston, We Have Neighbours.

Actually we got neighbours a while ago, I just never mentioned it here on the blog. They are not at all what I hoped for. I had hoped for people who might be friendly, people who might say hello, perhaps people we could become friends with.

What we got is elephant feet. These people STOMP around like elephants. Unfortunately because all the units must be sitting on the same concrete base? It sounds like they are walking right down my hallway. It is freaking me out. It is like having ghosts or something. I don’t even know how anyone could stomp around like that all day – it must be bad for their joints. Can anyone say hip replacement in later life?

I’ll be sitting here writing, the STOMP begins, and I turn around expecting to see.. I don’t know.. maybe a catwalk model doing a fierce walk, or some burly security guard – or even the other half arriving home. Then I remember what the noise is. They’ve been here for about a month now and I still haven’t got used to the STOMP. As yet I have been very good. I have not STOMPed back. But after this week I am tempted. Maybe I need to STOMP so they can realise how noisy it is?

We saw them in their driveway when we arrived home last week. The Other Half went out to get the mail. No hello. :(

I’ve been having some trouble with a few blogs in my Google Reader. It’s like this. I subscribe to what seems to be a rational, friendly, excellent blog written by an interesting blogger. Then they get accepted into Pay Per Post and suddenly go from posting once per day (or 2-3 times a week) to posting 5-10 times a day. The quality of posts goes from wow, I really enjoyed that post to cringe worthy stuff. I try to keep up. I try to tolerate it.

I write to the blogger and let them know I am feeling overwhelmed. Most other people would just unsubscribe but I try to let them know what they are doing can drive off their readership. Unfortunately most still keep posting insane amounts of posts, even after that. ;( I don’t get that. If you drive off the readers your alexa ranks go down which means you can’t keep being paid. So you might be raking in the cash right now but later you’ll be left without readers and without income.

Don’t get me wrong, I support a bloggers right to be paid for their posts. But I believe more than 3 posts in one day is too many. If you’re hitting me with more than that, don’t expect to keep me as a reader much longer. I’m sorry. I just can’t keep up and the content quality isn’t good enough to make me desperately want to, either. And I’m a fast reader!

Oh, someone stab me in the forehead with a fork already. There is nothing I dislike more than a blogger who seems to believe that one political party is better than another one, that their candidate for PM will change the world, make lives better, and fix all the pain in the world simply by getting elected. Good, reasonable bloggers that I usually love reading have apparently lost their minds in the midst of apparent hysteria that their chosen messiah KRudd might be elected.

They have forgotten that 90% of the voters turn up at the polls and think “Am I all right?” If yes they vote to keep the government. If no, they vote for a change. They don’t care about war, poverty, green issues, or the ugliness of one leader VS the other. They are selfish. They care about themselves. Issues, schmissues. Polls, Schmolls. They have a right to be that way, and they each get a vote to do with what they want. That is the reality of elections where everyone is FORCED to vote. These people would not bother to turn up on polling day if voting were optional.

So bloggers, please note. Nothing makes a reader cringe more than someone saying things similar to “Labor is guaranteed to win” “KRudd is our next PM” etc. This assumes facts not yet in evidence. And if it turns out to be wrong, you’ll hate yourself for having said it. It’s like you’re putting a jinx on. If you want Labor to win you don’t want to be putting the jinx on.

There is only one good thing about elections. There is only one man I would ever consider a God of Politics and a politician he ain’t. I’d vote for him though. I look forward to election night and spending the evening with him. I’ve seen him on TV a few times already and he has me all excited. Antony Green is an intelligent man who can make an election downright sexy. I wish you had such a man in the USA, my American friends. Do you?

I wish the one we have in Australia would sit down to have some decent glamour shots taken of himself because I can’t find a blog worthy photo. I’ll try and get some screenshots on Election Night. This time two weeks from now I will be preparing myself for the evening of such incredible televisual delights from the ABC election coverage that one gets to experience once every four years on Federal Election Night. Fellow fans of Antony Green will agree – we do not hold elections often enough!

Ladies and Gentlemen, Boys and Girls. I will now attempt to change my blog template. This may result in disaster. It may result in something else. Have patience, I will let you know when I’m done messing with it. ;)

Houston, we have wetsuits.

You have to understand, the deepest I have ever been in sea water is about calf deep. This is because I saw JAWS at an early age. I am absolutely terrified. I can’t even explain it to you. But I want to give this a try.

And my wetsuit is not full length, so jellyfish could get me :(