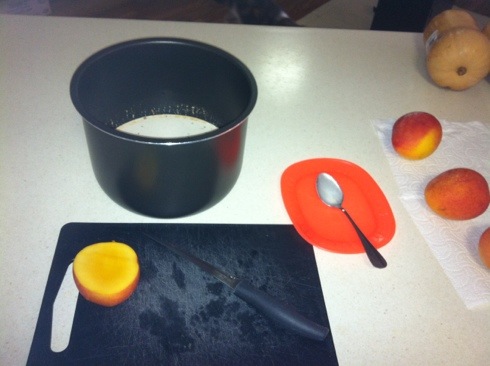 So far that is all I have achieved today. It was meant to be a big day of cooking but it turned into a huge day of sleeping in because I was so tired from the past 2 days and turning my body clock back around to regular day time – for 2 work shifts this weekend then I go back to vampire mode for 2 shifts from midnight to 6am!

I’m going to make the chocolate chili next, I’ll go and get some fresh meats for that, and see if I can hunt down the cauliflower and broccoli.

If I am going to do one big day of cooking per week, I may well need 2 slow cookers.

On a completely different note. Jo Abi wrote this post today about toilet roll holders. I can understand immediately the problem and it is a problem we once had in a couple of the rental houses we lived in because when you move in you take what is there. Some of these things are more complicated to work than flying the space shuttle, and they train 6 months to do that. 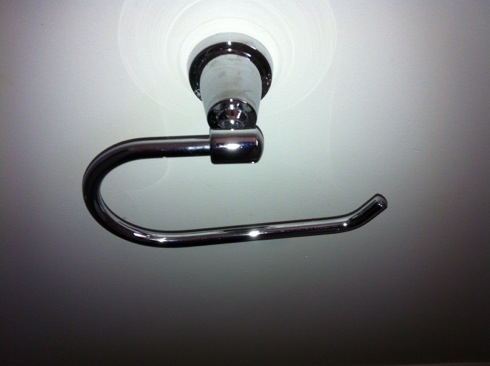 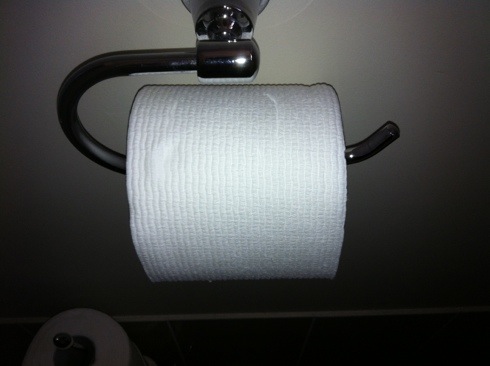 And so we never run out of t.roll to put on the holder – 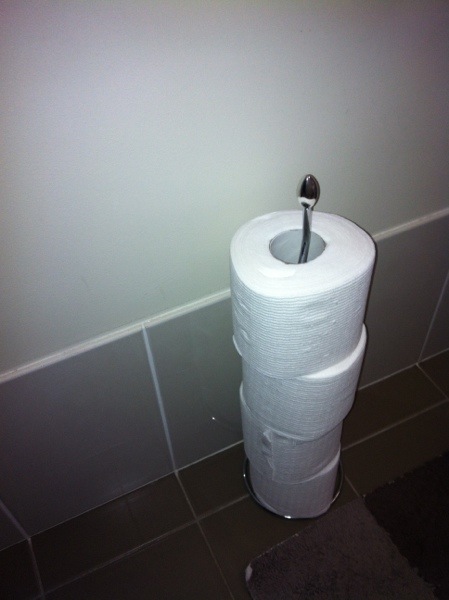 While writing this, I thought I would show you my stash of paper products – t.roll and p.towel. 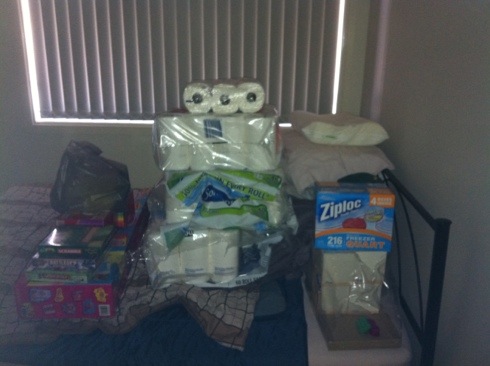 I have to say it is the most enormous mind relief to buy these products in bulk. There is nothing I hate more than running out of t.roll or p.towel especially as you will usually run out of it in the middle of the night. And not to have to lug this stuff constantly back from the supermarket – one trip, one lug, lasts 6 months or more for us. :) 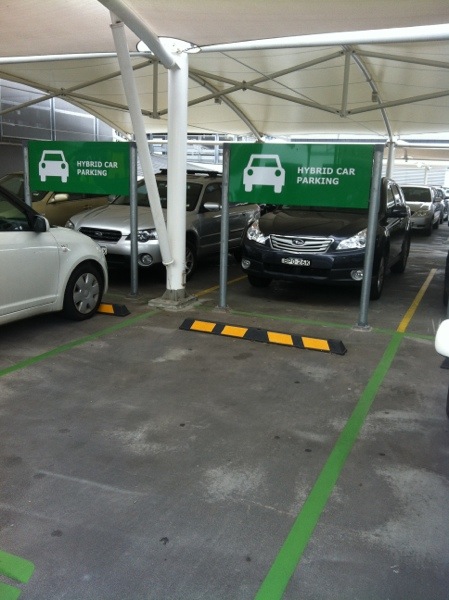 No, I’m sorry, we need the fuel guzzling turbo section. WHERE IS THE SPECIAL CARPARKS FOR THAT? ;)

We visited both Ikea and Costco. Found perfect sized wire baskets at Ikea for the deep freeze (so you don’t have to be an archaeologist to find stuff) as well as a bunch of great candles on sale.. 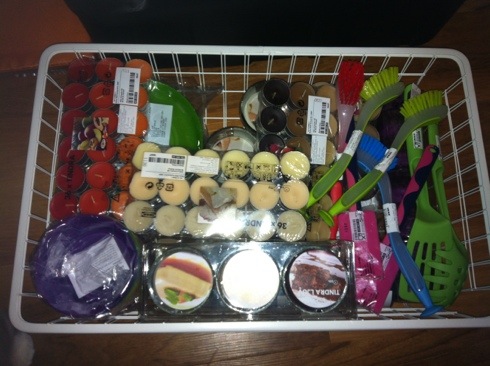 Then off to Costco, where we spent about 3 hours. And $849. On mostly fresh food as well as a lot of nuts in bulk – without added sugar which is relatively rare, for Costco at least.. We did pick up some frozen stuff as well. Unfortunately I did not get much meat. I think I’ll try to source that locally.

I have to find cauliflower and broccoli tomorrow as they did not have much in the way of that. If I go to Aldi super early I might manage to find some decently priced. With all the tourists down here at the moment it goes very quick.

Probably you will ask why go all that way to buy fruit and veg – the fruit and veg available here is not good and it is costly. The apples at Costco are twice the size of the ones sold here. In the trolley below the capsicums you see are 6x 3 different colors for $5.99 – you would pay $5.99 for one orange one here. You can get green ones cheap sometimes. The massive thing of 1kg baby spinach for $9.99 – you’d probably get 200g for that here unless you lucked out and found it at Aldi.

Here are some trolley shots. Yes, we had two trolleys in the end. How it all fit into the one originally I have no idea. 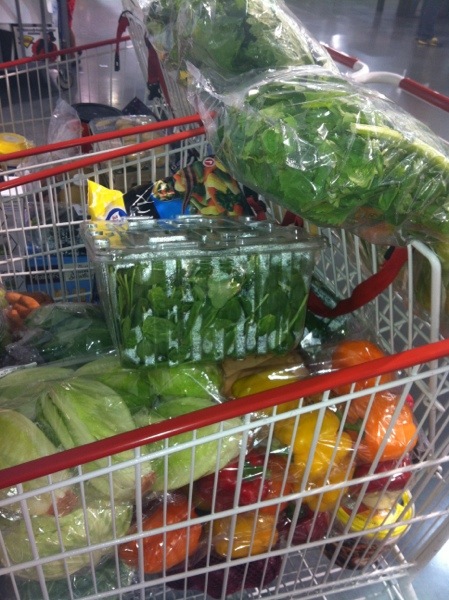 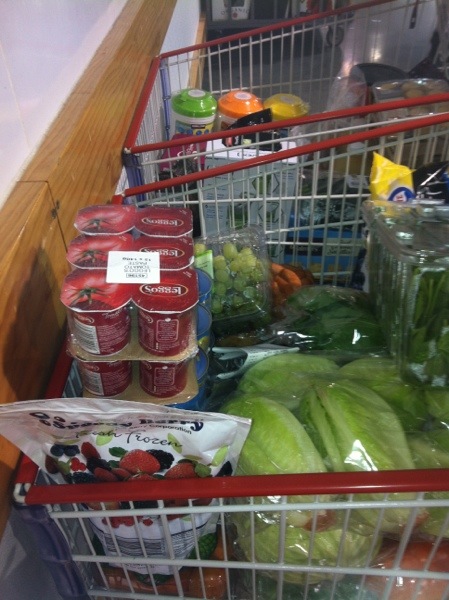 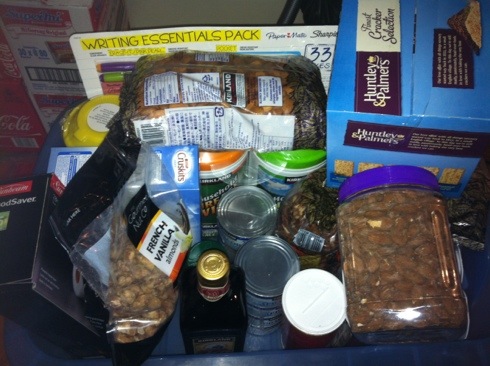 I’d like to have taken some more here it is at home shots, but I came home with a shocking headache so I’ve had to invoke the Forte. Panadeine Forte, that is. I did manage one.

Going to catch some serious zz’s before the big cooking day tomorrow.

There are some jobs that I have been wanting to do for over a year. One of them was to sort out the shoes. Why would I do this in preparation for kitchen jobs you ask? Well the kitchen is like one huge open plan area and in one corner of that we had shoe racks – it was right near the entry way and it seemed like a logical place for them to go but it never worked in practice. All shoes have now been moved to this new home. 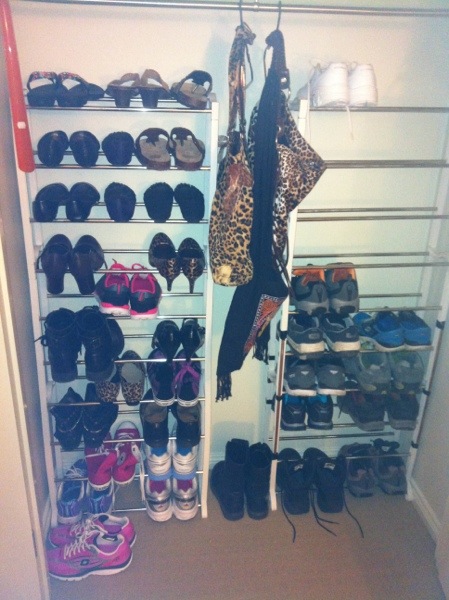 Plus some shoes have been put aside for donation and some for throwing out. Decluttering is always a happy feeling for me.. The scarf storage has been on the door of the new “shoe room” for a while. I’ve put the jewellery cabinet and storer into the same room as well. Kinda like a mini dressing room. Now I just have to get all the jewellery in the one place – I can think of 7 different locations where you can find jewellery of mine right now – on top of the soda stream being the most bizarre one. :) The plastic containers have been a nightmare I never seemed to wake up from, and I was over it. OVER IT. But now, it is sorted – using a bookshelf which was no longer needed for storage of the tupperware type containers, and all the plastic storage containers I bought today for use with the new plan of things.

Here is our new pressure & slow cooker! Shiny, no? Well kinda no, it was the floor model so it is a little dusty. Now I just need to learn everything there is to know about slow cooking. As in how it works, etc. I have never done this before. 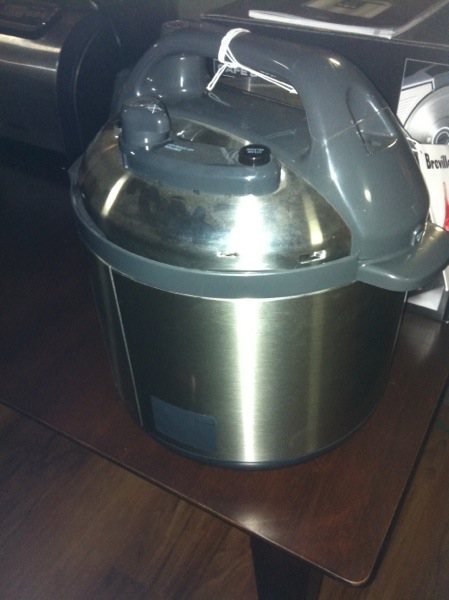 We bought a meat slicer. Yays! I am sick of spending excessive amounts of money on sliced chicken, turkey and ham. We have a foodsaver already. I also got this rocket blender. I have wanted one of these things for a while now and I think a strawberry/banana coconut milk smoothie might work for the mornings as a breakfast. 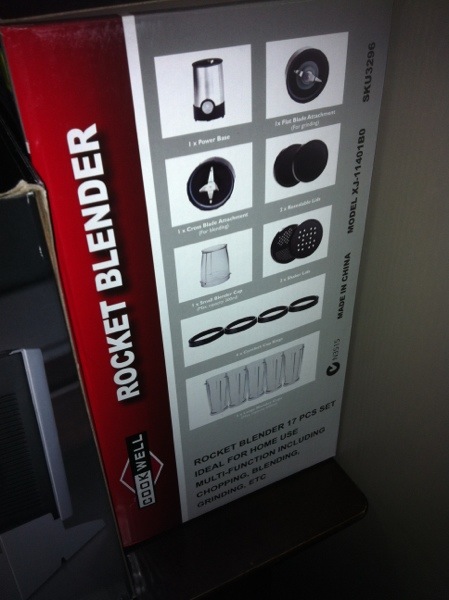 Of course with the new deep freeze, I can freeze fruit like there is no tomorrow. Bananas tended to sit and get ignored until they went bad and got thrown out in the past. When I find good strawberries I like to buy a lot of them, wash them off and store them. Now I can just put them in the freezer.

I bought a whole watermelon today half of which I have frozen for the chooks in case we get any more of those super hot days. I’ve cut up a bunch of apples to freeze for them. I had frozen zucchini prepared for them on Tuesday which went into their water as ice cubes, they loved it enormously.

Speaking of Tuesday, which was a catastrophic fire risk day here.. this SMS came to me as a surprise, twice. Plus we got an electronic recorded message to the home phone. 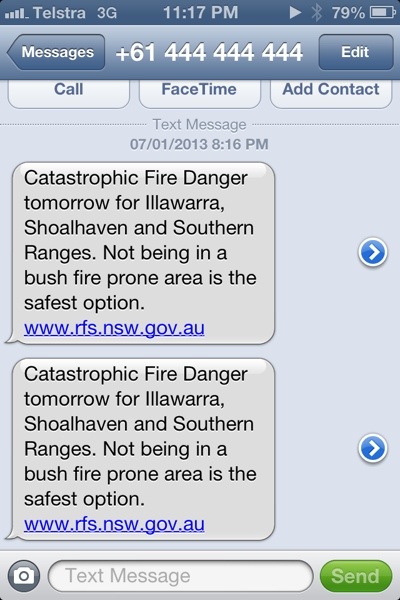 I was still up when the sun rose on Tuesday so I went out and washed out the chickens water bowls and ran the sprinkler in their enclosure for a while – the water helps keep the sand cool and helps with their dust bathing themselves down to a cooler level of earth. It was already 31 degrees on my weather station before the sun even came up, but it was overcast so I went to bed thinking everything would be less hot than predicted.

Around 10am just as I was drifting off to sleep the safety switch tripped. I had to get up, get dressed, go out and turn it back on. Around 2, some telemarketer called me on my mobile which I had turned to ring from silent in case there was some kind of emergency. I was not making a great deal of sense on the phone seeing as I was asleep, lucky for the telemarketer else I would have gone off for being woken up. After I hung up, I woke up and went out to check on the chooks – the weather station said 44 degrees C. Hot time!

The girls were doing ok, chilling out in the shade under their coop, dustbathing happily. I put some more frozen veg in their water and went back to bed. Absolutely terrible sleep and then I had to go to work earlier than I had been used to – 5pm instead of 6. I nearly did not make it.

Tonight I am hoping to head back to bed at a more regular time having got up about 2 today and then doing a hard day of chores. I tried to do this last night – went to bed at 2, tossed and turned till 6, said stuff it, I’ll go watch another Dexter ep until I am tired, which turned into 2 eps.

Tomorrow it is off to Sydney for an Ikea & Costco trip. We’re heading up a little later than usual in the hope of missing all the peak hour traffic we usually hit on the way home – it is daylight until late now and Costco is open till 8:30pm. Will update you urgently! :)