The Great Chicken Merge has occurred.. Sort of. You can put chickens together in an enclosure, but you cannot make them a flock or tell them what the pecking order is – they have to do that themselves, and it takes time. When your girls have so much space that they could pass days without running into each other if they so desire, integrating themselves into one flock will be slow going, and mostly takes place around food, and where chickens roost at bedtime.

So, how does one merge chickens together? With great difficulty, a lot of interesting chicken food, and plenty of time and attention.

Large trays of chicken interesting food – namely greens chopped up nice, tomatoes, strawberries, and tuna – were put together. I made 3 large trays, so that there would be plenty of places for the girls to eat and get to know each other. 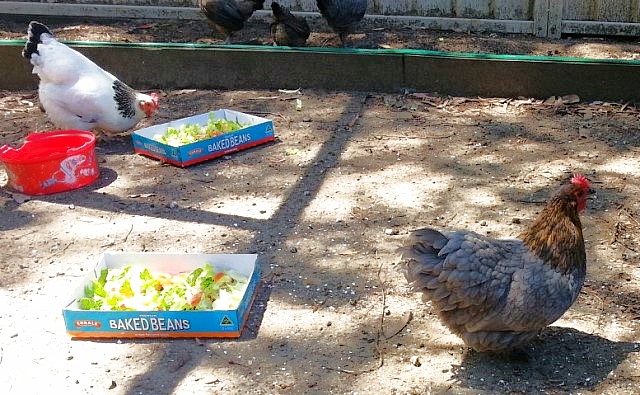 There was much eyeballing. New chooks and old chooks alike, eyeballing and sizing up their chicken foes. There were one or two kerfuffles – the beginnings of a fight, which mostly ended with girls going their separate ways without the fight really starting.

Battle lines were being drawn – the five old girls VS the 3 new girls. And yet none of the girls really seemed like they wanted to push things to an actual battle. Lizzy, the black and gold Pekin, is the only one who tends to push the boundaries. 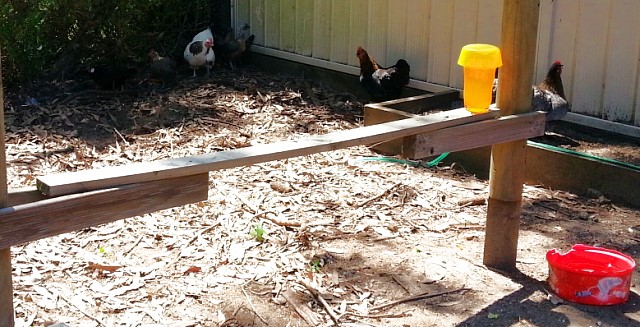 I’m writing this a couple of days later, and no actual battle has yet taken place – things are still in a wait and see mode, with the older girls clumping together and sticking together –

– and the new girls exploring the enclosure and not fighting much for position. 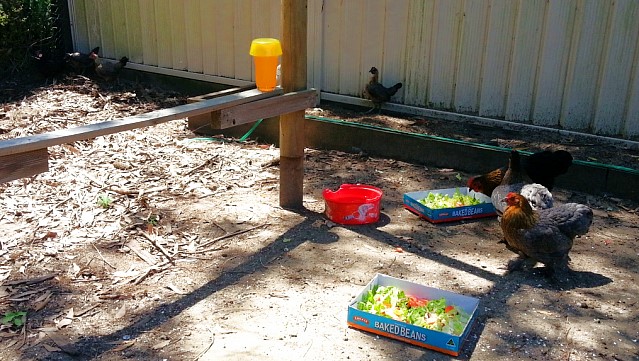 There have been a couple of interesting moments – mainly at bedtime. On the first night, Lizzy, who is perfectly named for her behaviour – she is *exactly* like her Pride and Prejudice name sake – decided she wanted to roost with the older girls. 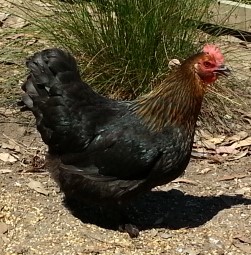 This is Lizzy – she is the black and gold Pekin. 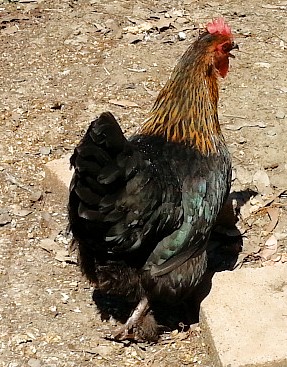 Well, what a to-do there was! Never did you hear so much squawking and tut tutting and general chicken noise at bedtime., but Lizzy carried her point and got a spot on the indoor roost, on one end, next to Rosie who is the lowest chicken on the pecking order and not one to cause trouble, not even with a new girl.

The two grey and gold Pekins – Kitty and Mary – decided Lizzy was welcome to all that kerfuffle, and they chose to sleep happily out in the enclosure area, where there are two roosts to choose from and zero old girls to fight with in order to get on them.

The next night, Lizzy was either too tired, or had been convinced by Mary and Kitty to avoid all the drama, and all 3 girls slept on the roost out in the run area. There’s nothing wrong with that, it is just as safe as the roost inside the coop. I don’t have a decent shot of Mary at this time, she is a bit camera shy but here is a shot of Kitty – 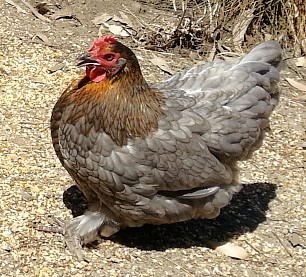 Below is an old photo of the run and you can see the two roosts there, from when the coop and run were first mated together. 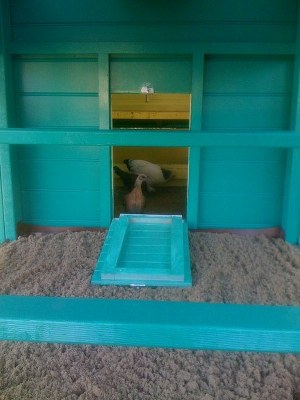 The day the merge took place I was out in the enclosure with the girls for an extended amount of time. I had some work to do out in the chook pen, namely, taking out some of the large amount of leaf litter which appeared during December. I also intended to sit and watch them a little, so I took out a stool and a glass of water with a cover, because raking can be dusty even after all the rain we’ve had. 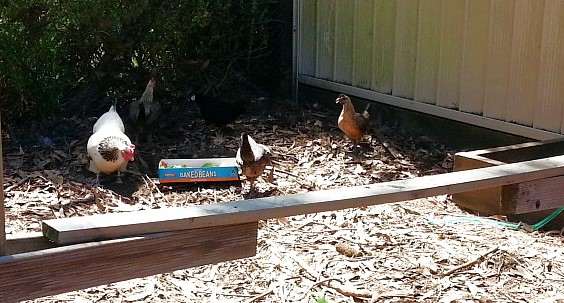 I cannot speak for all chickens in the world but I can speak for our chickens. Our girls LOVE leaf litter. For the most part and I have blogged about this before, we rake it all into one corner and leave it be, and the girls scratch and peck and time and weather generally composts it into soil.

There you can see piles starting to form. The plastic green thing on one side is the end of the hose which runs into the pen allowing us to water the garden bed if we need to. 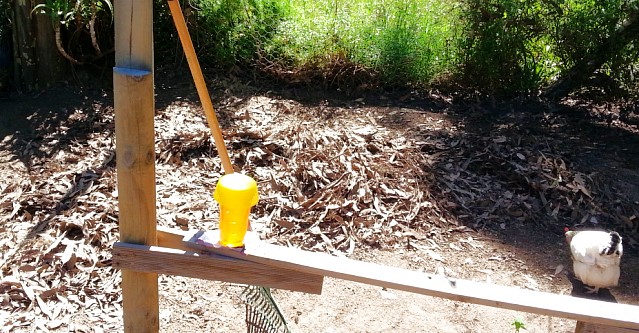 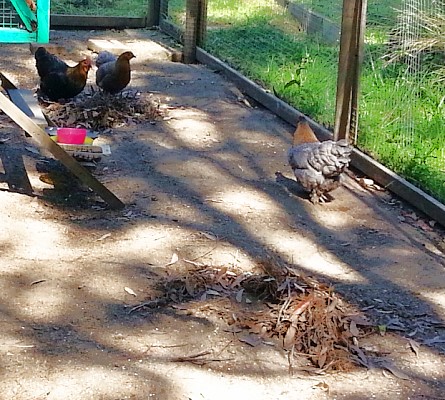 You make that pile, we’ll destroy this pile you made, kthx human!

We had a thunderstorm every afternoon for the first 7 days. The stormy weather blew a lot of extra leaf litter into the enclosure. This is no bad thing and normally I’d just rake it up all neat like and then let the chickens pick it apart again. You can see in this picture below that the chicken wire roof has plenty of leaf and branch litter on top of it, as well.

However, on closer inspection, I noticed that some non leaf rubbish – chip packets, lolly wrappers, plastic bags, that kind of thing – had blown in as well. And I’m not happy to leave that in there. A decluttering was required, the litter needed to be raked up and any rubbish removed, and then much of the litter could remain, to be picked apart and enjoyed. During my raking of this litter, I discovered many of the reasons why the chooks spend good portions of their day picking through it – I found many crickets, spiders, slugs, and other insect goodies which the girls love to eat.

You may have noticed that our white leghorn bantam “Twiggy” is missing – she had to be euthanased, unfortunately, not long after we got her. She was suffering very badly, to the point her comb and wattles were turning purple, a sure sign of respiratory and circulatory issues. Due to these worrying symptoms we sent her to be necropsied and make certain we were not dealing with any truly serious nasties. 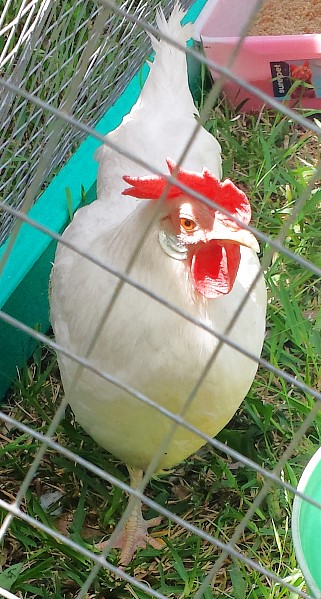 The news eventually came back and while no evil respiratory illnesses were present she did have laryngitis, bronchitis, a chest infection along the lines of pneumonia, plus a kidney issue which would have become very unpleasant for her down the track. The vet said it is unlikely she would have survived the stress of having to be treated with antibiotics as she did not much enjoy being handled by humans, and unfortunately the kidney issue would have killed her within 6 months in any case.

They also found that she had serious nutritional deficiencies and seeing as all 4 of our new girls turned out to come from the same breeder, the vet suspects that the other 3 girls may have the same nutritional deficiencies. We will have to keep a close eye on them. Sometimes these things can be fixed by a balanced diet, but sometimes much damage is already done, especially if these crucial vitamins and minerals are missing when the girls are growing up and need them the most.

It is always difficult to make that decision to euthanase, and I know we’ll have to experience this again before too long, with 5 girls who are getting on in chicken years. If we make it to the end of 2015 with the 5 older girls, I’ll be very happy if that happens, but I’d also be quite surprised.

Chickens are here for a good time, but not always a long time.