I wrote this comment on Dancing with Frogs just over a month ago now. I have an update, and some photos. :)

My favourite (Red Comb) was attacked by a hawk this morning. She is sort of ok. We have not been able to find any injuries. She did have some blood on her beak but my thought now is that blood belongs to the hawk and that is why she is still with us now. She is no shrinking violet and I am sure she gave that hawk one heck of a pecking.. and was thus unceremoniously dumped as too much trouble.

I don’t think this can have happened too far from the ground because she was still in the chook pen..

She was unsteady on her feet, but I think maybe that is shock, and also that she was probably dropped though none of us saw the attack, we did see the hawk sitting in a tree nearby right after. Nothing is broken, though I suspect she might have bruising we can’t see. She is still alert and still her regular loopy self personality wise.

She stayed in the nesting boxes all day with all the other girls comforting her, except for one girl on the lookout in the run, anytime a bird flew by there was much bagerk-ing and posturing from the lookout. They took it in turns – one keeps the watch, the others comfort – until it was roost time. As soon as it got dark and the other girls put themselves to bed, we took her inside because it was going to be a cold one tonight.

Right now she is safe in a box, all toasty warm (but not too warm) by the gas heater. I am resisting with all my might the constant urge to check on her. She needs her sleep. I must not touch that box until 5:30am at the earliest.

If she survives the night, before the other chooks wake up in the morning, I will install her back in the nesting boxes in a warm box she can get in and out of with food and water nearby so that she will not lose her place in the flock. My hope is that she’ll have had enough time and rest to be back to normal – if not, we will keep up the night time warm inside sleepovers until she is.

It does not matter what it is, if anything happens to the chooks it is always her it happens to and I think this is because she is my favourite. I have now officially un-favourited her, and I am going to have no favourites now. I must like them all equally. It isn’t fair to the favourite!

We will now be installing bird netting over their area, to keep them safer from flying predators. Though it is entirely possible that hawk will not return – too much trouble for no reward. If the hawk had picked one of the other girls the hawk might have had better success.

It might be time to re-visit the design of the chook pen, too.. I really want to just suck it up and bite the bullet and make them a huge totally enclosed area like the one on henblog..

So.. what happened next?

Red comb did survive the night. At 6:05am I opened the box, which had been in front of the new gas heater overnight. I tell you, this was the warmest chicken I have ever held. And she was so happy to see me, and I was so happy to see her. It was raining outside so I wrapped her up in a towel so she wouldn’t get wet, and took her back out, putting her in a safe box in the nesting area.

I knew she was not out of the woods yet, that there might be internal injuries we could not see. The other half – who grew up in the country – had checked her over very carefully and could not see anything wrong. I crossed my fingers and went to bed about 6:30am (night shift) and when I got up that night she was still fine. Each day that went by and she was still here, I got more hopeful.

She did have a limp for a while and it took her a while to get back up on the roost but otherwise seemed fine.

She has made herself a new chicken friend by the name of Rosie and all appearances suggest she has been lowered on the pecking order. She used to be second chook, right after White Sussex. Now, it is White Sussex, the other two game hens, Ancona, Red Comb, and then Rose Comb (Rosie).

Now Red Comb and Rosie are inseparable. Where one goes, the other must follow. Rosie is the black chicken below next to Red Comb, eating a corn treat. 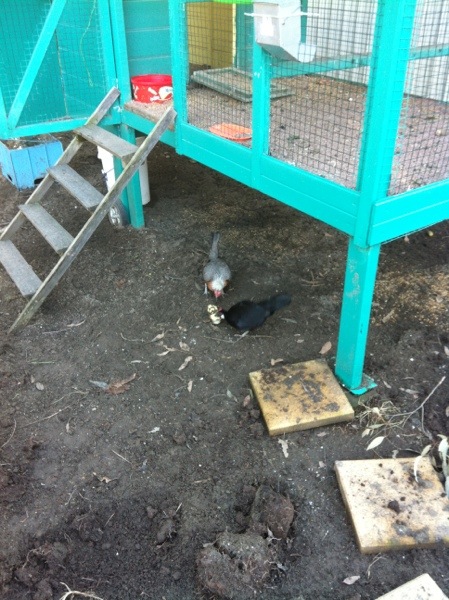 I think the reason for the demotion was that Red Comb had a limp for a while, was not on the roost at night, and was not her usual speedy self.

The chooks were locked in their run/coop for a good couple of weeks. They were not a great fan of this, being it is winter and they like to be out scratching up a storm of bugs and worms in the softer ground. On Sundays they would get let out early when the other half got home at 4 and he would be out there with them for a couple of hours so they could free range a little under his watchful eyes. Many healthy treats were given in the coop/run to keep them from being bored.

Then a couple of weeks ago, we re-did the outdoor pen. It now looks like this – 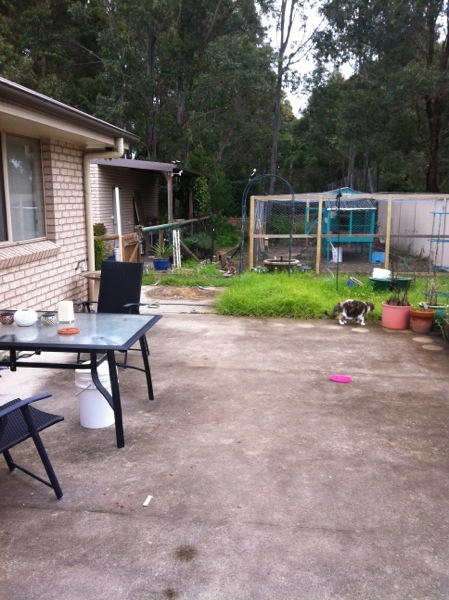 You can see the height of the pen has now been doubled to walk in height. It used to look like this – this photo was taken just after we put in a fresh sand floor back in the summer – 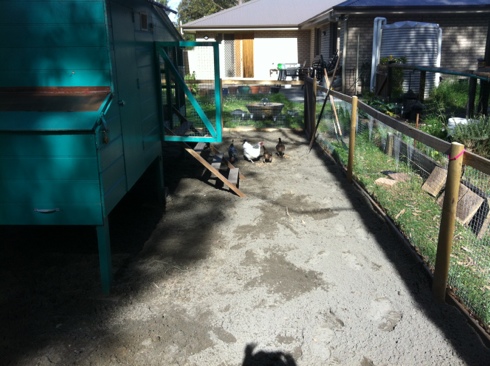 Chicken wire now covers the top of the enclosure. It took a good couple of days for the other half to sew it all together with binding wire. 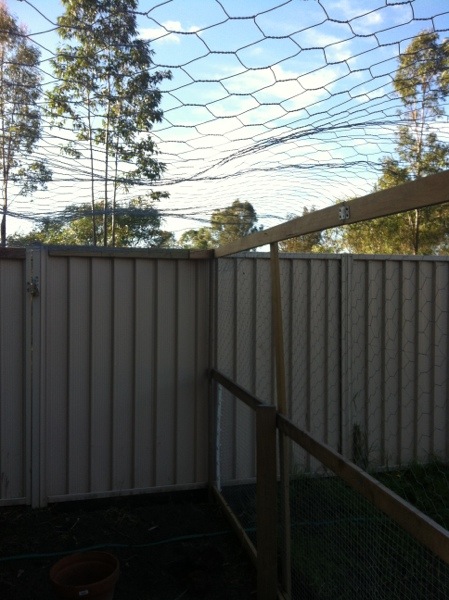 We put in a beam at the back to support the wire some. 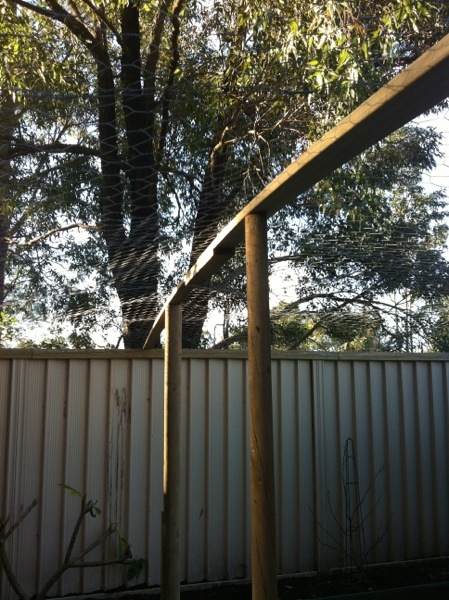 After this photo below was taken, I got out the pitchfork and made some holes in the dirt, for the girls digging pleasure. They had a blast. 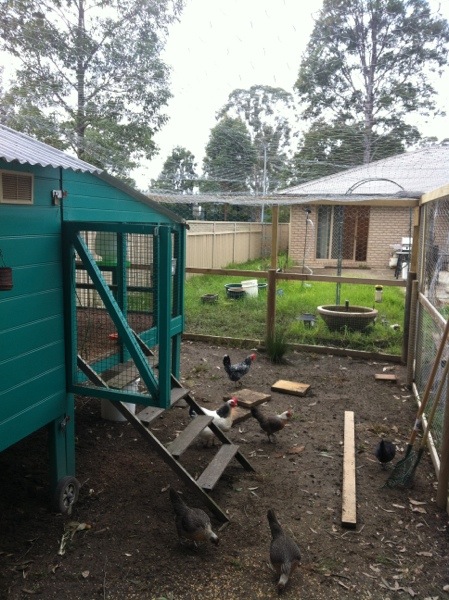 I don’t know. I think if a predator is determined to get my girls, no amount of chicken wire or protective measures is going to be enough to save them. I think this is a reasonable compromise for the time being. In the summer, it might be rethink time. I want to build me a chicken batcave safe enough no fox or quoll or other unfriendly predator can get through. For now, I think this will prevent further hawk attacks during the day while they free range, at least.

The other great thing about this is pigeons can no longer get in and steal the food. I like the pigeons, don’t get me wrong, and I mean to set up a proper bird feeder for them. I just am not a huge fan of the lice and mites they can sometimes carry with them. Our girls have been lice and mite free for a fair while now, though.

I’ve been on the overnight shift for a month or two now, as in starting work at 10pm or midnight – I have been meaning to post this for ages but events conspired against me.

I am not sure yet if Red Comb knows she has been un-favourited. She doesn’t get treated any differently, it is just in my mind I am not allowed to call her my favourite anymore.

As I type this, White Sussex has begun her ba-gerking. There are a tonne of cockatoos and galahs flying about overhead. She will ba-gerk for that or anytime one of the other girls lays an egg.

Speaking of eggs, these crafty girls were hiding theirs somewhere. Now that they are in this enclosure, hiding is no longer an option. I also suspect our resident blue tongue lizard was eating some of the hidden eggs! But maybe one day when spring rolls around and I get back to the garden, I’ll pull out something which has gone rogue over the winter in the garden only to find a huge clump of eggs hidden there.