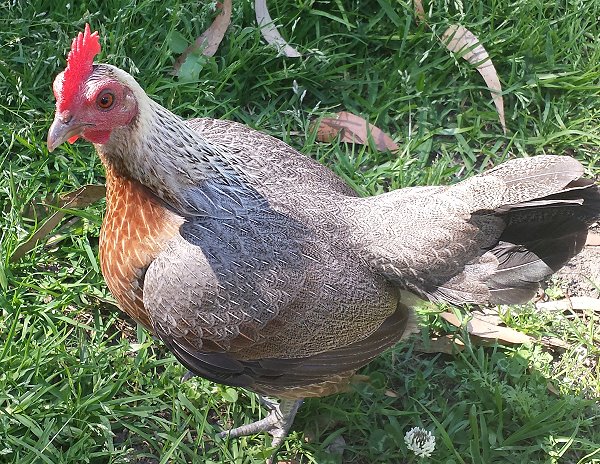 The post yesterday was written on the 13th of November. Red Comb had a whole month of blueberries and happy chook time since then. Late yesterday, about 6pm, I noticed that she was still sitting down after the heat of the day had passed. The sight of me at the back door with blueberries was not enough to raise her. I knew right then something was wrong.

Although her comb was still perfectly red, when I got down to hand feed the blueberries, she did not even try to walk over. Normally she would have run to me and had a blueberry in her beak before you could blink. I threw some over her way, and she did move towards them, but then she wobbled and nearly fell down. After that she seemed to perk up a little and did manage to eat some blueberries, but I knew this was bad news.

She then managed to climb up the chook stairs, and she managed to get onto the roost. We let her settle a little. Because the vet was already closed, we tried the spa treatment. That is when we discovered she either had an egg or some kind of growth in her abdomen. If you pick up a chook at regular times, you can often feel the egg inside – they feel quite soft and not like an egg at all. This felt harder than an egg. 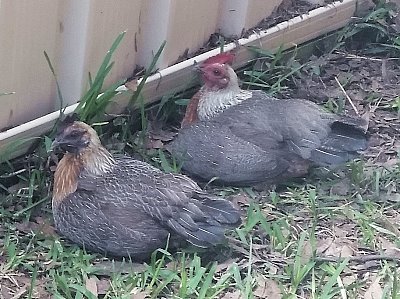 We talked about it – well, The Other Half talked, I sobbed mostly. We agreed she would have to go to the vet first thing this morning. I knew within myself the most likely outcome was that she would be euthanased. Even so, I had a tiny amount of hope that it was just an egg stuck, and that maybe our spa treatment would work and like all the other times before, she would get another chicken life. That maybe this morning I would find her egg in the nesting box and she would be out roaming with the other girls.

You see, Red Comb was not just a normal chook. She was my favourite chook. I fell in love with her the moment I saw her, because the first moment I saw her, she was sticking her head and neck out of her enclosure at the chook auction, trying to see her sisters who were in the pen below her. Rows of pens with chooks in them, she was the only one sticking her head out. 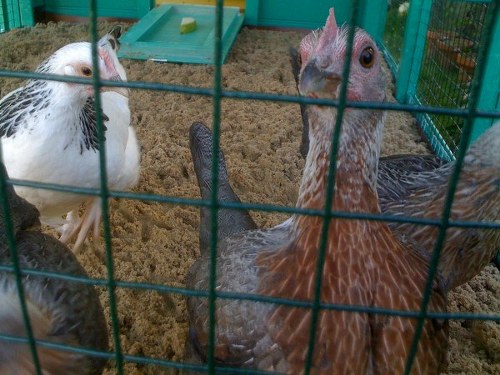 There she is. That photo gives you an idea of her personality however I could post every photo I ever took of her and you would still not quite understand, because her true awesomeness could never be photographed.

I went to take a closer look, and the look she gave me, I will never forget it. If I were to try and put it into words, it would be HI!!!!!!! Her personality shone through like a bright light right in your face. I hoped I would be able to afford her. I can’t remember how much I paid for her, but I managed to buy both her and her two sisters in the pen below, plus White Sussex. My budget for the day was $120 and I think all four together cost me somewhere between $100-120. Here was the first post I wrote about them.

While waiting to bid on them, I met the man who bred her and her sisters the next day at the chook auction. He breeds them to show them, and these girls were not show chicken quality, so he was hoping they would find a great home. We had a good long chat. I showed him photos of the place they would live if I won the bidding for them. He was very happy to see the three girls reunited into the carrying case and going to a good home. 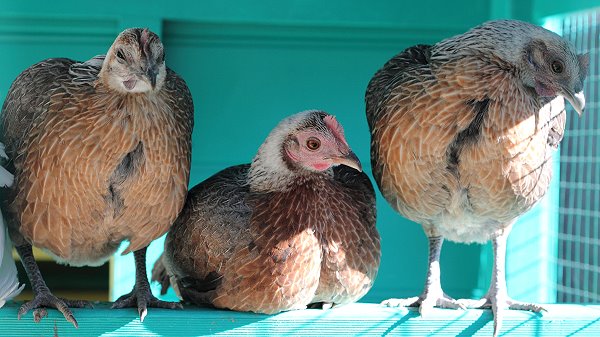 So she and her sisters made my backyard their home and in the process they made my backyard something I never expected – a place I wanted to hang out and spend time just watching them *be*. The life of Red Comb and her sisters was treat filled and happy. She got all kinds of treats, from mealworms to yoghurt. She had broody times occasionally, not as often as the other chooks.

Then there was the hawk incident in 2013. I wrote about that here, and I officially un-favourited her at that time. After the hawk incident she was never the same chook physically, but she survived and went on to eat many more treats.

I knew this terrible day would arrive eventually. No matter how well I knew that or how much I tried to prepare for it, that does not change the fact that the past 17 hours or so have been awful. I had a lot of trouble going to sleep last night because every time I closed my eyes, I could see that happy chook running towards me for her blueberry medals and I knew it was very unlikely I would ever see that happen again. 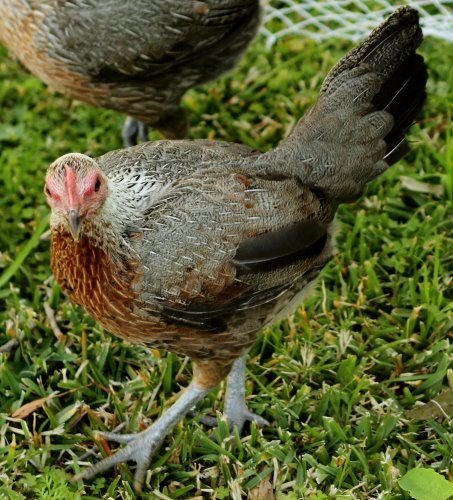 When I got up this morning I went right to the back door and I saw her standing on the roost. Girls are never on the roost at that time of day – everyone else was under the chook pen dust bathing. We had our showers and went out to put her in the carrier. I took some blueberries and though I had them in my hand and she was the only chook there, she would not get down off the roost for them.

Eventually after a lot of convincing by me, she did get down, and wandered over to eat her last blueberries. I called the other half over and he put her in the carrier. I went inside and called the vet, keeping it together for the time it took to book an appointment in 15 minutes and telling them it was likely for euthanasia, then I lost it. The whole way there, as much as I tried not to cry, salt water ran from my eyes.

Luckily our normal vet was working today, after a short wait she took us in, and told us what I already knew to be true. It was a mass, not an egg. I asked her if The Other Half could go with her while she did the euthanasia – he is a farm boy plus he is amazing with the animals, they are so calm around him. She gave Red Comb some anesthetic gas and she went off to sleep, she never even knew about the needle. 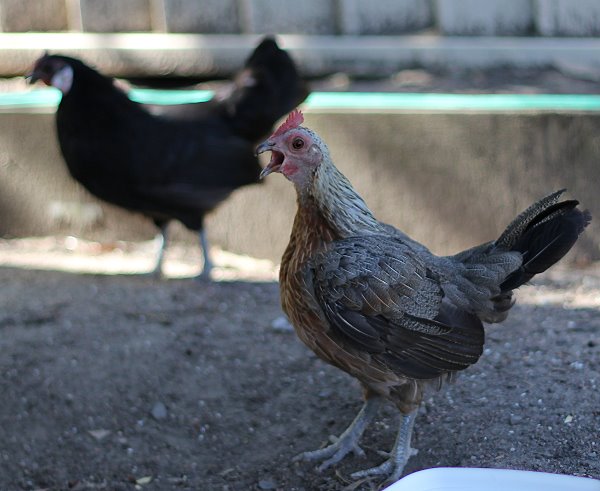 In the photo above she was mid-moult – each moult brought her closer to show chicken quality and she was in such beautiful condition, even today her feathers were stunningly gorgeous. We brought her home and trimmed off some of those beautiful feathers as a keep sake, and now she rests under the lemon tree, with Mary. Her two sisters are behaving very strangely this morning – they know.

As I always post when this happens – there are 5 other chickens in the yard for whom life continues. They live minute by minute, sucking the most joy out of each and every moment, whether it is a dirt bath, finding a bug, eating a treat from the humans.. all we can do is love them while they’re here, protect them the best we can from predators, know when it is time to let them go, and remember them when they are gone.

It will be a very long time before I can go into the yard without expecting Red Comb to run up to me, looking for her blueberries. I take huge comfort in the fact that she who was so concerned for her sisters at the chook auction got to arrive here with them and live many happy and treat-filled days with her two most favourite chooks in the world. 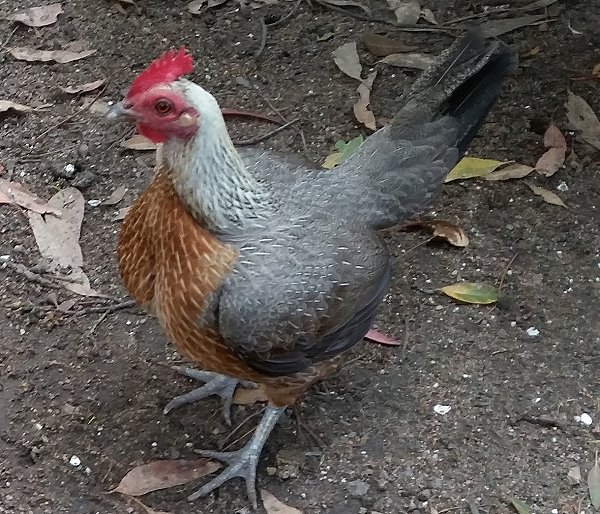 I am officially favourite-ing her again. There will never be another favourite. We loved you, Red Comb. May there be as many blueberries as you can eat at the Rainbow Bridge where you now rejoin White Sussex, Ancona, Mary, Twiggy and Big Kitty. You will be greatly missed here.

I’ll be taking a few days off, you might not see me in your comments sections this week. Posts are scheduled as always, so the blog will continue as usual.