I’ve been a busy bee the last 24 hours or so. I’ve been using my StumbleUpon toolbar to “stumble” all the blogs listed under “Blogs I read daily via Google Reader” and “Australian Blogs Community” in my sidebar. So if you’re in there, you’ve been stumbled my friends. ;)

The reason I have been keeping myself busy is.. I had a major disappointment yesterday.

You may recall back in May, I wrote about my heart being broken when a house in the place I want to live turned out to be too small. I don’t usually like to make the same mistake twice, but yesterday I did it without even realizing it. Last Tuesday when we went looking at houses we’d seen this one that looked like it might work for us. It was very close to the beach in a quite peaceful area. I called the real estate lady and asked if we could arrange to look at it, and we made it for Monday next week.

I was pretty excited because it looked big enough to fit all our stuff in, and it was solid brick – many of the homes where we want to live are weatherboard or generally beach shacks you couldn’t live in during a winter. Sephy fired up Google Earth for me and he sent me a photo which had me daydreaming of beach walks every day taking my camera with me. 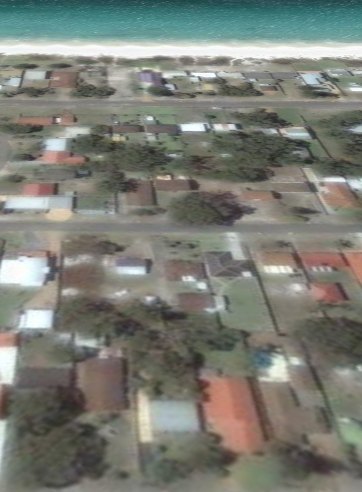 The house is somewhere in this pic. ;)

By the time the other half got home from work, I’d already mentally packed all our stuff and moved in to the place. He had received a phone call from the real estate lady saying she had been in contact with the owners and they’d had a bad experience with cats and they wouldn’t accept us as tenants, so there was no point even looking at the house.

I was completely shocked. The next thing I know my eyes started to water all on their own and I was bawling. It sounds stupid to you guys I guess, but there is such a strong urge in me to go and live near that bay. After the tears, I started to get angry. Our cats have never done any kind of damage to a house. They have cat towers, they are desexed, they don’t pee on the carpet, they are well looked after. The worst they might have done is fur up a curtain, but that comes out in the wash.

Even worse – the current tenants clearly had young kids. So if I’d had kids instead of cats, it would be fine. I don’t have human babies, I have feline ones, so I can’t live there. It seems to me this is discrimination, and completely unfair. If they said to a couple with kids, sorry you have kids, you can’t live here, imagine the outcry!

“There’s nothing like work for getting over a disappointment” from Memoirs of a Geisha. I have to say, it really works. :) I’m feeling a lot better already. And it benefits all you guys in my sidebar as well because you might see some traffic from Stumbleupon now.. I hope you do. ;)

Yesterday was an absolutely glorious day. The Other Half and I went to a few places to have a walk on the beach. The last place we went is in the new town that both of us really want to live in and it was a place we drove past last time but didn’t stop. It’s more interesting than a normal beach, it has mangroves and a big wooden bridge across them, so you can stand there and look at the little crabs doing what little crabs do. 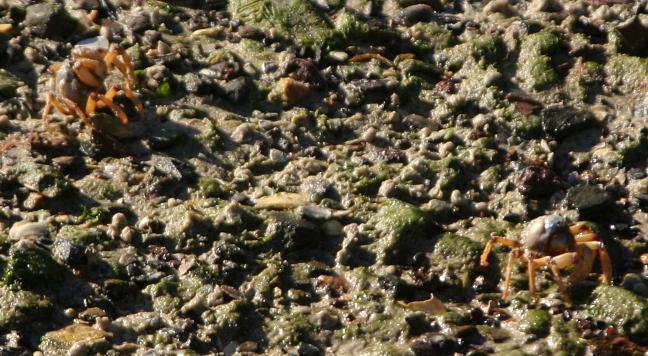 There were little fish in the stream which was running out of the mangroves, the stream was a funny color because it had rained, and the fish were eating little bits of food coming to them as a surprise

The tide was out, and you could walk out for miles along rocks and sand. And we did, we spent over an hour walking there, just soaking it in, looking in rockpools, finding hidden beach life. It was so peaceful. Absolute, utter silence. It was incredibly incredible. 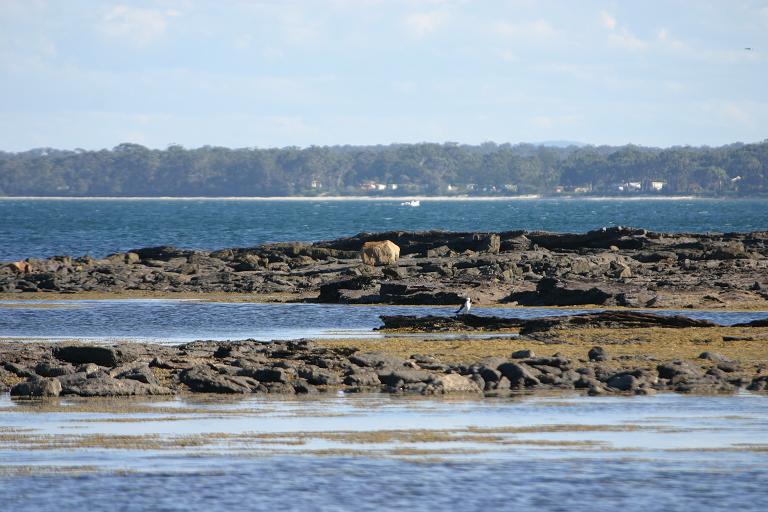 As we were leaving we noticed that one of the houses we’d looked at was maybe 3 houses away from where we actually had been. I began to imagine a new life, beach walks twice a day, peace, silence, no screaming kids. The house was listed as having three bedrooms and a rumpus room. There’s only two of us but we have a lot of stuff. We live in a four bedroom now. It looked like it would be big enough, and though the bricks were a little dark I said to the other half, why don’t we go to the real estate agent and see if we can have a look?

And so we did. Half an hour later we pulled up out the front of the house. The real estate lady was there waiting and already had the house open. It had screen doors (something we really miss now) and we went inside to a quite dark room which would have been the lounge. Then up a couple of steps to the hallway which ran the length of the house. At one end of the hallway there was a giant wood fire and another living area. Then it had a kitchen and dining. The kitchen was fairly old and country style, but I liked it. Mentally, I was already moving in boxes.

The bedrooms were somewhat small. It had one bathroom. As we walked back towards the laundry I said, so where’s the rumpus? The real estate lady said – it’s out the back, but you don’t get access to it, it belongs to the owner and he stays there on weekends, holidays, that kind of thing. Hmm. Not brilliant news, but I’m still prepared to accept compromises I guess. Then we go outside, and there is no undercover area for a bbq or outdoor setting (we have both) except the owner has one attached to the rumpus, which we wouldn’t be able to use. There was no garage, either.

After we’d been in the house we were standing out the front and all you could hear was the trees and parrots flying past and I just really wanted to live there. Even if the owner stayed out the back from time to time. Even if we didn’t have a garage. Even if we had to give the pool table to my parents to make it work. My mother would be furious, she spent years trying to get rid of a pool table, but maybe I could talk her into it. The idea of beach walks, maybe two minutes walk away, whenever I felt like it.

All the way home both of us tried to figure out how we could make it work. I could almost hear Tim Gunn from Project Runway in my head “Make it work!” but no matter how we sliced it, there was no way us and all our stuff and our two cats could fit in that house. It didn’t have Austar. It didn’t have a broadband connection. We probably could have those fitted, and if there was a rumpus in which to put the pool table we would have explored it. But there wasn’t.

I was really pretty tired, I’d been up for 24 hours trying to put my body clock back onto schedule. We got home and it was just after 4pm, and then those kids across the road started up screaming and playing and yelling, and The Other Half came in and said to me “It’d be worth getting rid of half of our shit just not to hear those kids anymore”.

It didn’t hit me till I got up this morning and was chatting to Sephy online and telling him about the house. My heart is broken. :( It’s like a new version of life was coming towards me, stretching out its hands, and at the last minute it turned around and went the other way.

We’re just going to have to be patient. What we want will turn up. We have to believe that. And now I’m going to be more pro-active – I’m going to get in touch with all the property managers there and let them know what we’re after. But today I feel really grumpy. :(