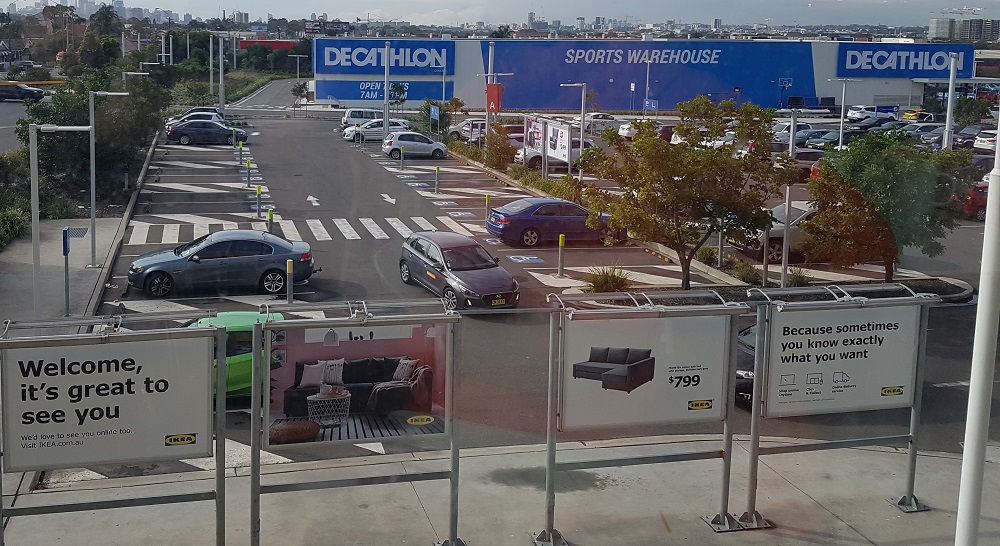 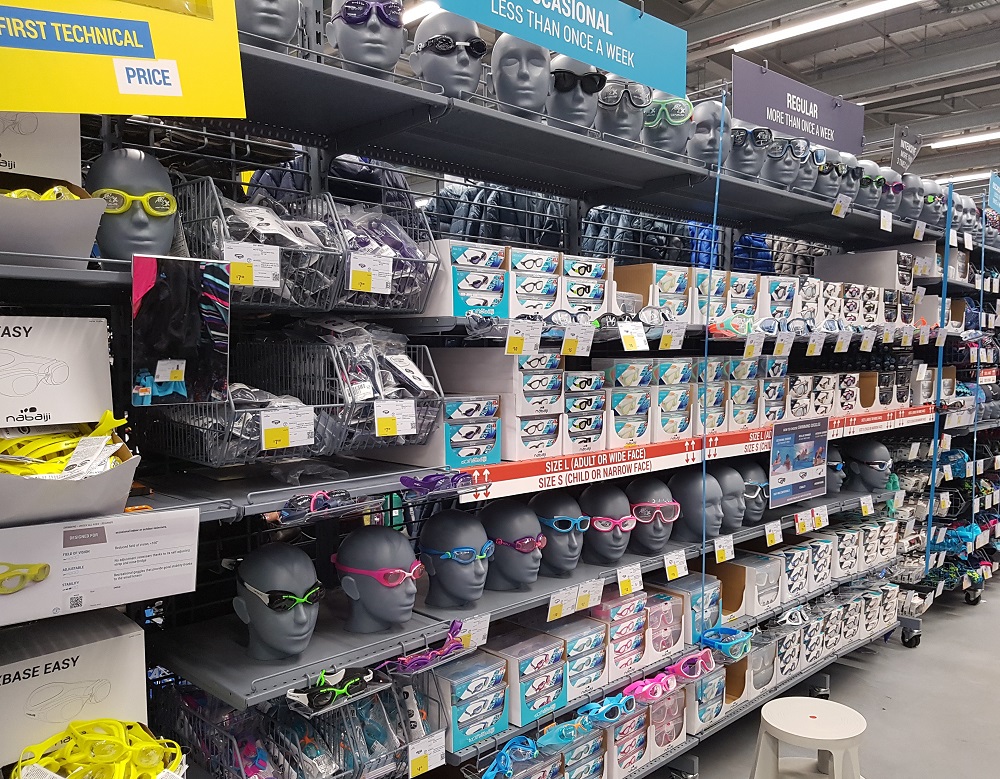 The goggles start from $3.50 and they have an enormous range of them. If you can’t find a pair here I would be very surprised. They also have corrective lenses for same goggles at very reasonable prices. 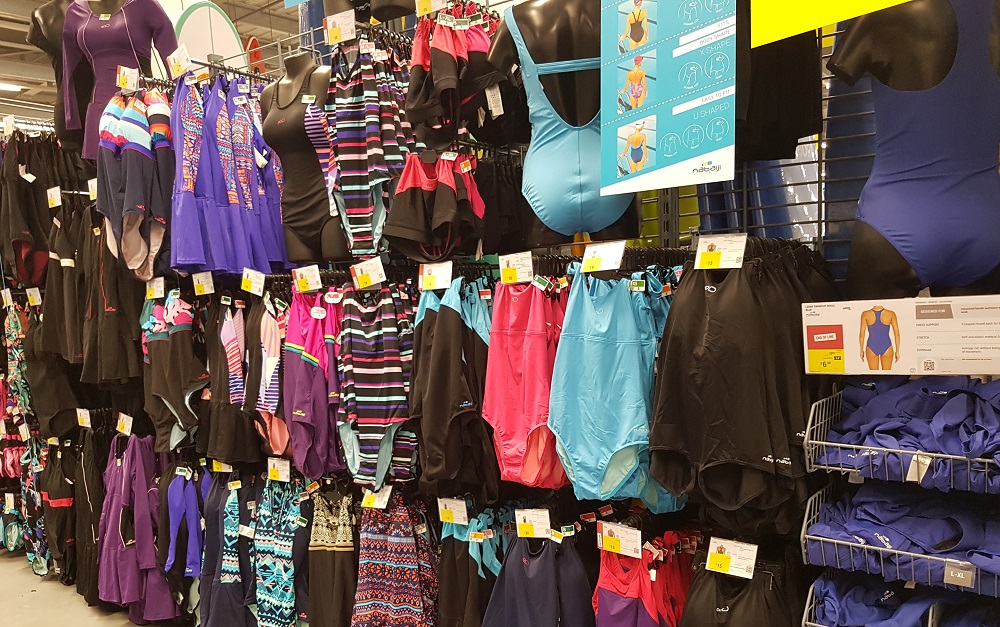 There is a huge choice of swimming outfits. 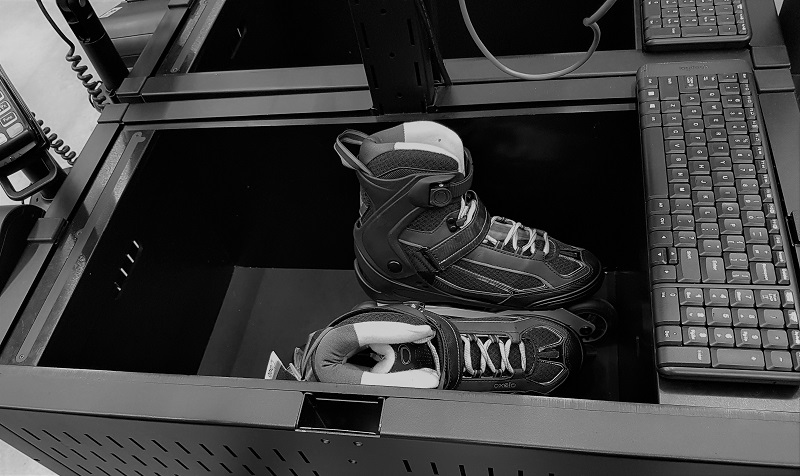 When it is time to pay, you place your items in this box and it reads the RFID chip. Also Decathlon is a membership warehouse though membership is free. You can sign up on arrival and scan the membership card on your phone into the Stocard app, so that you can use it when you check out. 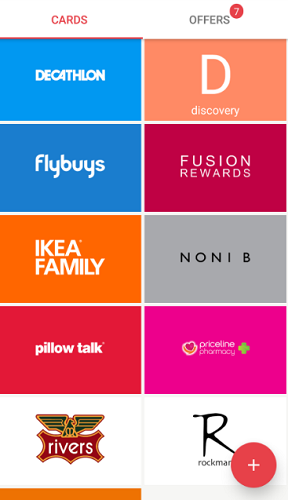 That was the first time I ever saw the Stocard app but you can be sure I am now making great use of it – I have scanned in 15 membership/loyalty/rewards cards which I used to carry with me everywhere – which is MADNESS if you think about it. Madness! And I am going to check my special hiding place because I took out a lot of cards I don’t use a while ago.

The app has an option to turn on the “card assistant” so when you approach a store your phone will pop up a notification to easily access the card for that nearby store. This does not seem to work for Coles, though, at least for me. 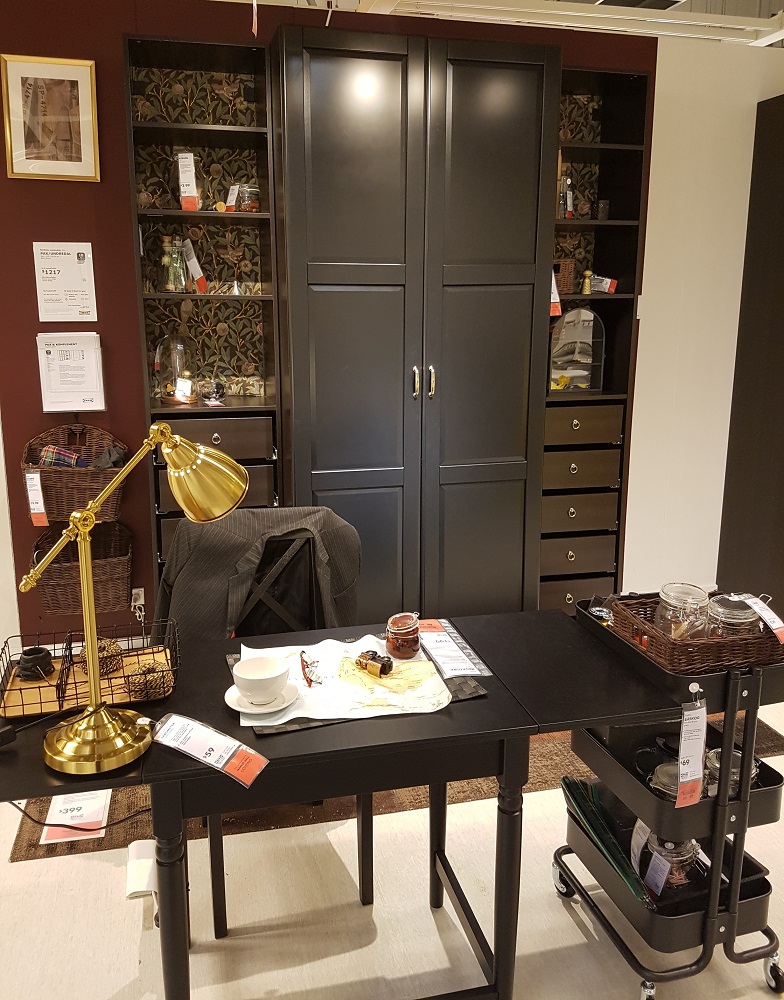 After we bought the rollerblades, we wandered back over to IKEA for afternoon coffee and a wander, and to get my curtains. They had this little setup which looked like perhaps Harry Potter or Indiana Jones might have just walked away from. 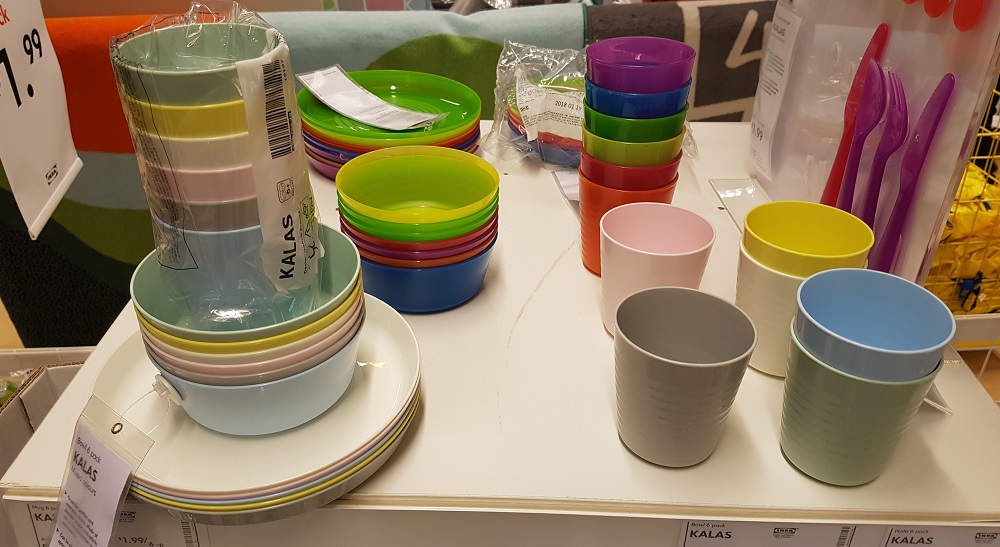 Our favourite KALAS is now available in a new colour. I’m not such a fan of it – I prefer the rainbow set – and apparently The Other Half is banning me from buying any more of these anyway. I feel like you can never have enough KALAS bowls and plates. Microwave and dishwasher safe, unbreakable, so useful. 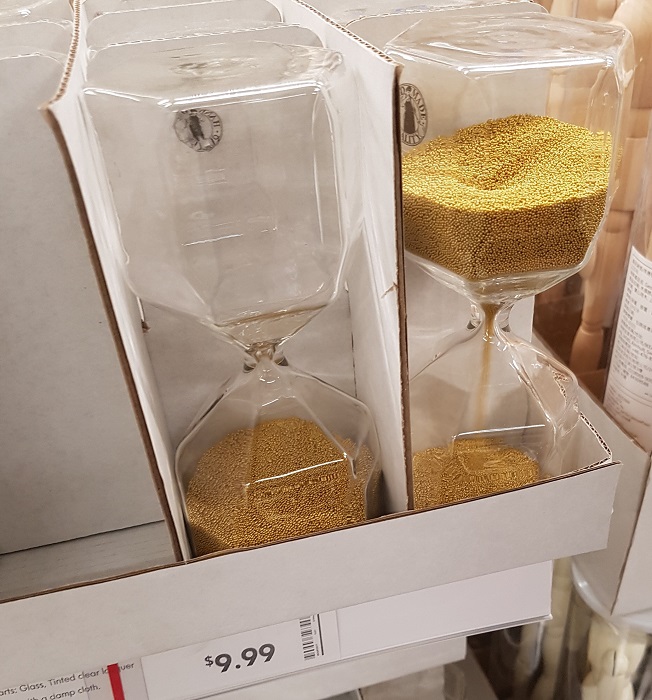 We did not buy this even though both of us really wanted to. We flipped it over and stood there and watched the gorgeous gold “sand” melt through the hourglass, and then we did it again, and yet another time, while we debated whether we could/would/should buy it.

What would we use it for? Did we need it, or did we just really want it? In the end we chose not to buy it, but will it be like Indiana Jones choosing the holy grail? Did we choose poorly, or wisely? 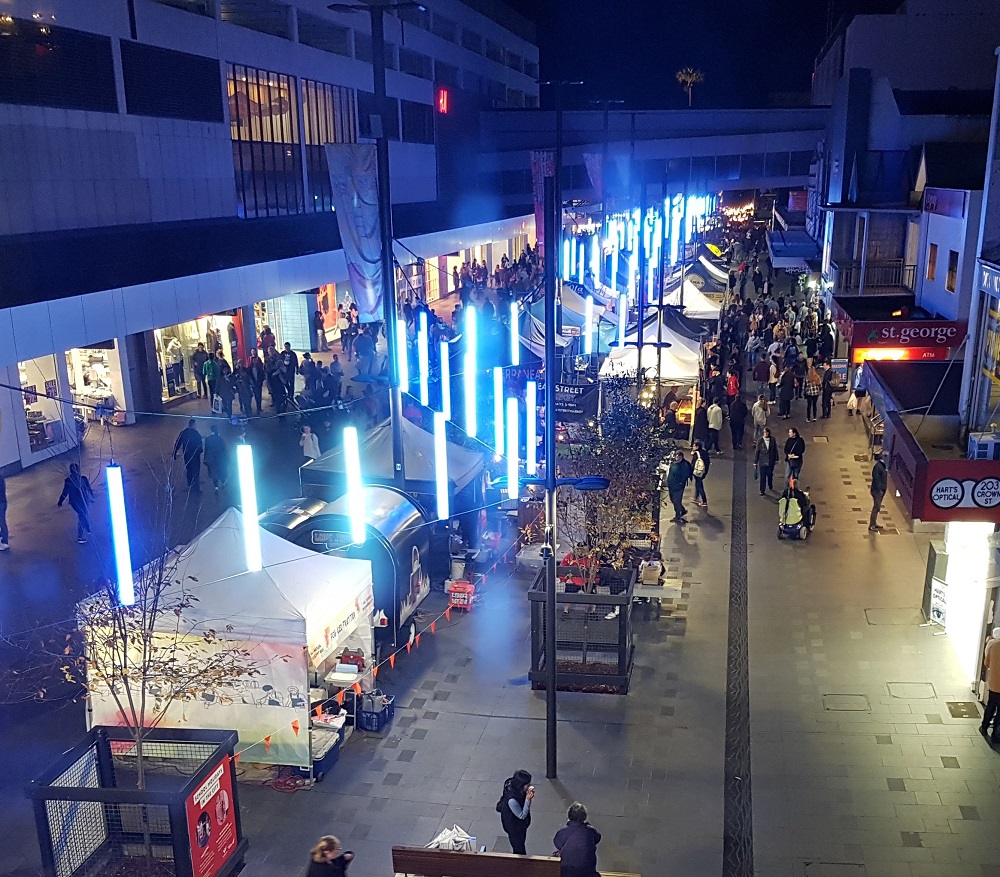 We left IKEA around 3pm and headed back down the coast. We had a destination in mind – Eat Street is on every Thursday night in Wollongong and the weather was perfect for it – cold but not windy. We have been once before and apparently I did not blog about it here, which surprises me but then again there is a lot of stuff I don’t post about. I got Poutine from La Poutine food truck. Mine had bacon and ground beef on top with the cheese curds and gravy. It was awesome. Perfect for a cold night. The other half got some loaded fries – they had cheese and a spicy chipotle aioli – from Norma’s Burger Bar plus a burger. He chose the same stall last time and when he enjoys something he tends to stick with it.

Soon after we finished our food, we were on our way home, after a very long day out. We planned to head out for a run & rollerblade (I run, he rollerblades) the next day, and a bushwalk sometime over the weekend, too. But that is a story for another day.

I ask this question a lot to the great annoyance of people around me. Sometimes *I* will like to know more, and finding this new building in the carpark of IKEA Tempe was one such occasion.

It was recently my birthday – no, I don’t tell people and I don’t celebrate them for the most part – but I was asked by The Other Half where would I like to go for dinner, and I chose the Korean BBQ that we have visited a few times in Campsie, a couple of hours drive away.

My parents were most unthrilled by this concept – a 4 hour return trip just to eat dinner? But they did not understand, this is two hours of all you can eat Korean BBQ with a sushi buffet, a hot food bar, and desserts. It is like the old days of all you can eat Pizza Hut, only more healthy.

But when I told them our nephew would be meeting us, they got on board. Well, mostly, there was still some grumbling and “I can’t believe we’re going all that way“. I mean these are people that complain about going 7km to eat dinner, so I was expecting this. I was also expecting the end result – which is they go, they eat, they LOVE it, and they demand to go back.

I did not take any photos as we were too busy eating, drinking, cooking on those little charcoal BBQs in the middle of the table, and me personally I was peeling a lot of prawns, who wants to pick up their phone in the middle of that with prawny fingers? Oh, the prawns, you guys. They are so delicious cooked on that bbq. I set a target of eating 19. I failed. Mainly thanks to the sushi, which was also great.

Here is a lovely blog post with photos – Se Jong Korean Bbq Buffet, Campsie. Since that post they have installed extractor fans inside which make things a lot less smoky. 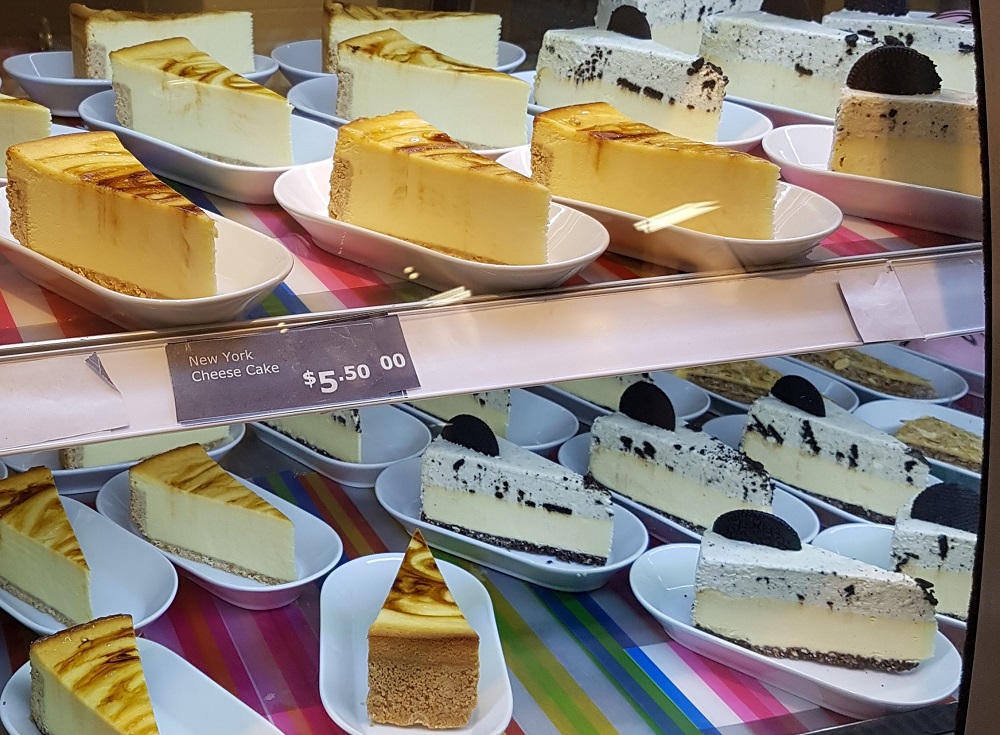 On the way home we stopped in at IKEA so Mother could get some small side tables for her guest rooms, and just so we could wander the halls happily. This is when we discovered the Decathlon building. We resisted the HUGE slices of cheesecake because we’d just eaten for 2 solid hours but we did get coffee before the long drive home.

How do I find out more? Usually via my phone. I went to the Decathlon website and the very first thing to appear was a set of rollerblades – a secret message to us that we needed to return soonest – as The Other Half has been looking for rollerblades for some time now after his wheels biodegraded as a surprise to us. We decided we would return the next weekend, BUT..

The following week, it turned out that The Other Half had little work to do at work, and instead of wander about trying to make work or create work, he arranged to take 2 days of his 5 weeks of holidays which he has been collecting up for some time now. And thus we found ourselves in the Polo on a Thursday, heading up to Sydney. We ate the Swedish Meatballs overlooking the store, and when we finished lunch we strolled across the carpark to check out Decathlon. It turns out this place is bizarre. A sports warehouse, you would expect all the usual brands, Nike, Adidas, maybe Reebok, etc. But there was not a single known brand to be found. The brands here are all brands I had never seen before. They are all specially made for this company.

Even so the range of items is incredible, and the sports they have specific equipment for are many not well represented sports in “regular” sports stores in Australia. When have you seen a horse riding aisle at your local Rebel Sports? I was so stunned to see it I did not even take a photo! But I might have to go back for some jodhpurs and riding boots – both starting at $28. These are jumpers suitable for golf, and walking. I liked the teal one. I took this photo to send to Sephyroth – cricket bats are not exciting to me but he is a fan. ;)

Look at all these socks especially sent to tempt me, but I did not buy any. Good Snoskred! 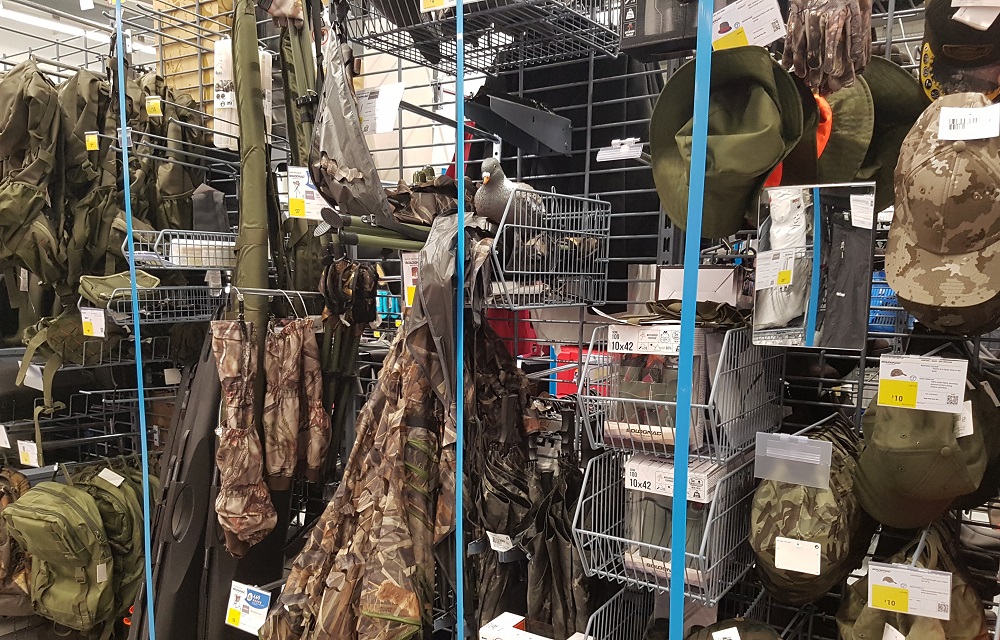 This is part of the camouflage section, for hunting, fishing, and various other hiding yourself in plain sight sports.

I just really liked this photo but I also thought the camo shorts $29 and trousers $36 were very good value. The Other Half will like to try some, at some point.

Most of these skate shoes were between $30-49. This would be excellent value when you have teenagers, I suspect. In fact I saw a lot of great value kids stuff, it felt like they cater very well for kids here. Ah, finally the section we are looking for.

But our day out was by no means over yet, and this day was so full of awesomeness, I will need to make another post to tell you more. If you’d like to know more tune in next Wednesday! :) Never fear those in Melbourne, Decathlon will be opening in Box Hill in November. As usual Adelaide, Brisbane, Perth, Darwin, Tasmania, you are SOL. Jump on a plane, Tempe is right next to the airport though it is a bit of a hike from either terminal, mainly because there is a large container terminal in the way and no access road. I would recommend a taxi, if you are in urgent need of reasonably priced sports equipment.