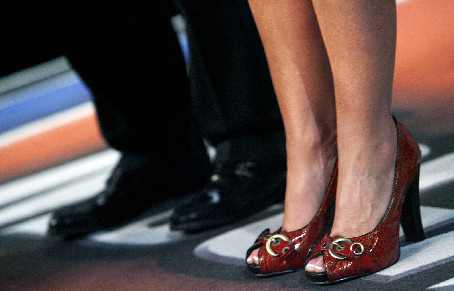 Probably the image above has given away what I am talking about. Those are the feet of John “Walnuts” McCain and Sarah Palin, as seen on the day that John McCain announced she was going to be the vice presidential candidate.

Thank the deities, the horrible possibility of that woman being one heartbeat away from the nuclear codes never came to pass.

I am sure one day a woman will be in that position, a woman will even be president. But they will deserve to be there, not be picked just because someone is desperate to shake things up in a campaign, barely vetted or asked any questions before being thrown into the spotlight a mere 2 days after first meeting the presidential candidate. 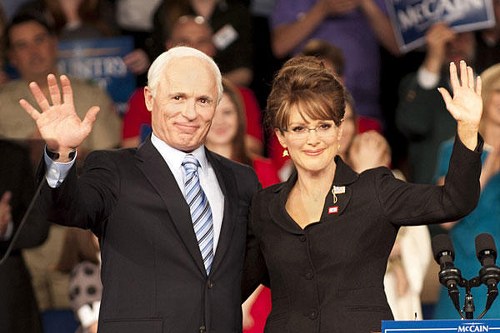 It is such a great movie that it joins movies like Tootsie, Groundhog Day, Mrs Doubtfire, The Devil Wears Prada, Notting Hill, Pretty Woman, and many others on the quite long list of movies I cannot possibly flick away from – once I stumble on them playing, I’m stuck there watching them until they end.

It has Julianne Moore as Sarah Palin and she is absolutely amazing. even better than the Tina Fey impersonations and Tina Fey looks scarily like a doppelganger of Sarah Palin. It has Ed Harris who is downright unrecognisable as John McCain. It has Sarah Paulson as the long suffering Nicole Wallace, and it has Woody Harrelson as Steve Schmidt.

We’re only just over two years away from the next US election and the long, seemingly never-ending primary season will begin in January 2016. Fingers crossed any memorable dates next time will be for good reasons.

Some of you would know that I’ve been involved with AKMuckraker and The Mudflats since September, 2008. We’ve been through a lot in the past few years, many stressful situations which we have worked through together as well as the rest of The Mudflats Admin & Moderation team. I consider her to be a good friend.

AKMuckraker (Jeanne Devon) and her good friends Ken Morris and Frank Bailey (A former aide to Governor Palin) have collaborated together on a book. It was released yesterday in the USA. 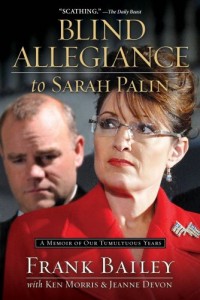 Though whether she is still an aide remains to be seen – Palin has a habit of throwing people under the bus for much less than Mansour is guilty of.

During the time I have worked with AKMuckraker, there have been times when she has shared confidences with me. Never in a million years would I think to share those with anyone else, not even the admin & mod team, without her express permission. Certainly not with someone I’ve never met whether or not I trusted them.

When someone tells me something and tells me to keep it in the vault, with me, it is LOCKED IN THAT DARNED VAULT and it isn’t coming out until that person tells me otherwise.

Mansour betrayed Sarah and her family, and thoroughly deserves to be thrown under the bus. When someone trusts you and allows you to be a part of their “inner circle” you have a responsibility to keep your mouth firmly zipped..

Even worse – if this is what she was saying to someone she never met, what the heck is she saying to people she knows?

Apparently the person who was tweeting with her had 122 tweets from her which he was willing to sell. The people he ended up giving them to (nobody would buy them) have not shared all of them but you can view the ones they did share here and here.

My personal favourites with the irony in bold –

19:23:35: Listen: I tell you things I wouldn’t tell anyone tho I have press hounding me for the info I tell you. I trust you even tho I’ve never met u

Ain’t that the truth!

Angry Snoskred, anonymity, internet, Internet Safety, Sarah Palin, The Mudflats, The Vault, Who Is Snoskred
1 Comment Posted on November 15, 2009May 31, 2015 by Snoskred

Sarah Palin’s book “Going Rogue” is set to be released this week.. She’s going on Oprah, and doing Barbara Walters, and travelling around the country in a bus, which if you think about it, is quite insane for someone who just wants to be left alone by the media.

Some of the pages from her book have been released – Wonkette has a few. I am not sure if this book is one long run on sentence with full stops in there only because the editor insisted on putting them in there or what the heck is going on with it, but the truth is this book seems like comedy gold. Fingers crossed William Shatner will do a reading of it.

So while The Mudflats will be going a bit craizy this week, I will let you in on a little secret. Below you will find the location I’ll be going to in my head when things just get a bit too nutty. 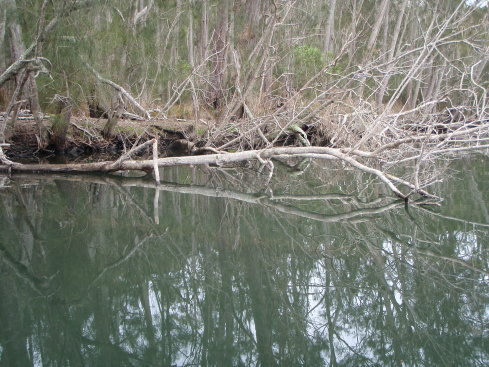 Can anyone say.. quitter?

AKMuckraker has an article with all the info on Huffington Post – What Is Sarah Palin thinking? One Alaskan’s Perspective.

Her resignation speech was.. freaky.. to say the least.

It happened to be the day after Telstra accidentally disconnected our home phone while connecting the new home phone at the new place, so I had no internet and I got SMS’d by one of the Forum Admins (shoutout to Char!) to let me know what was going on.

So I took the sim card out of my iPhone, plugged it into the Telstra wireless thingy, and got on the web to find absolute chaos – The Mudflats server had crashed after being totally hammered. The Mudflats is on a server separate to all the other blogs so thankfully it didn’t take everything else down like it used to.

I called Serverguy on the Skypee, and it was about 6am his time, he heard the Skypee and arrived to find out what was going on and baby the server through a very difficult day online.

We are all just stunned. Completely stunned.

Nobody knows why she has done this – there are plenty of rumours swirling around. To be honest, at this point I don’t think I really care why – I am just happy for the people of Alaska and hopeful that the new guy might actually be able to step out from under Sarah’s shadow and do some good for the people – some of whom are struggling to survive, some of whom have recently experienced flooding and do not have homes to live in right now.

Wimmins/girlz have partz which iz private and wimmins/girlz should know absolutely nothing about them except SAY NO TO SEX. They callz this abstinence only SEX education..

Of course it iz eazy to SAY NO TO SEX when you have no idea what SEX iz. You can just say YES to everything. How can they callz this an education?

Iz same as telling people SAY NO TO DRUGZ but then not telling them nothing about what drugz is and stuffz. So these people could be thinking they iz saying NO to DRUGZ while smoking crystal meth and mixing cocktailz and then injecting some heroin while drinking them a SEX on the BEACH.

This iz helpful to potential child sex abuserz because if girlz don’t know exactly what SEX iz, then it is easy to tell them thingz like “Iz ok to do thiz because thiz iz not having SEX” etc.

If you tellz them things like “babies come from storkz” and stuff, that iz helpful information.

If you tellz them stuffz like real information about how SEX workz and information about safe SEX and contraception then they’re just gonna run out and have SEX right afterwardz. Even if you tellz them that SEX can kill them via HIV or other ways of death and that SEX can result in baby which = no more fun partiez and hanging out with friendz, they’re still gonna run out and find a partner and boff themselves senseless. Darn kidz can’t be trusted.

Cos you tellz them SMOKING WILL CAUSE CANCER and they iz all like what do I care about that, I’m immortal and by the timez I get CANCER there will be a cure for it so I just gonna smoke up a storm right now.

And you tellz them drink driving causez death in road crash but they still goez out and drinkz lots then drivez home.

Why aren’t we just locking kidz in cells until they are 21? They clearly haz no sense and are all irresponsible and stuffz, going out shagging, drinking, smoking drugz and cigarettez.