Well, the other half got a Nintendo Wii in the mail, which means I think I might have a little west wing marathon because there’s no chance of him talking to me for a few days. ;)

It’s just another gadget which makes annoying noises to me. I need earplugs or something. 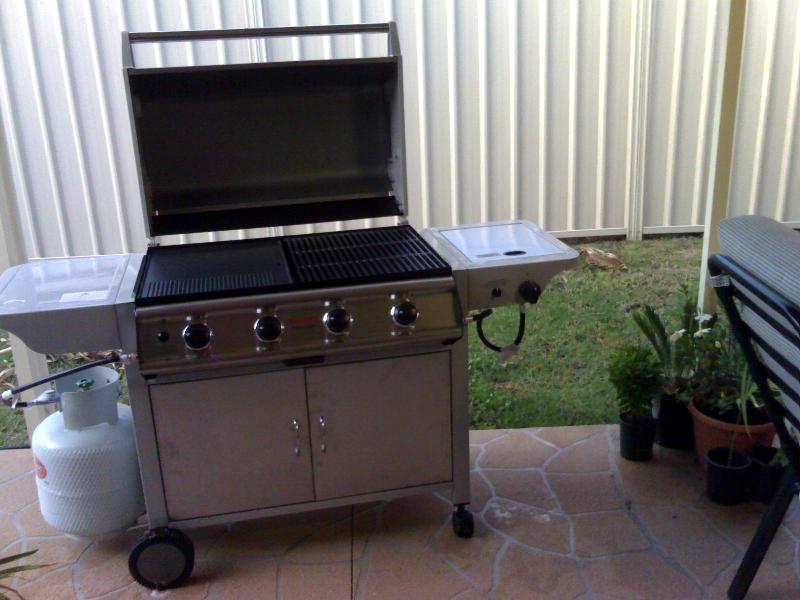 That’s what I say to the other half when his coffee is still sitting here an hour after I made it so it would be ready when he got home from work.

“Oh, we went over to the club for a drink, and now I’m just sitting here waiting for the attendant to bring me my $200”

Apparently he hit the 10 credits per bet button and won the feature..

Oh well, maybe a trip to JB Hifi is on the cards for tomorrow then! ;) But there’s dinner waiting for me down the street and I’m hungry!

I don’t usually blog much about the Other Half, but I thought I would mention this little incident that occured. To make it easier lets call him OH.

First I need to explain a little about the water here. There’s sometimes something very wrong with it. In my bathroom the sink sometimes gets pink or yellow mould and sometimes both, which is scary. I rang the water people and they did not seem to know anything about this but speaking to people who live in this estate, they all have the same issue but it’s not until you ask them and let them know everyone else you’ve spoken to who lives around here also has the strange mould that they start to think it might be something unusual or maybe even bad. So I have just decided to avoid drinking it.

I caught OH filling up a container with tap water and I asked him what he was going to do with it.
OH – “Fill up the coffee machine”
Me – “Excuse me? Are we on the same page here? We don’t use tap water in the coffee machine, you know that”
OH – “I don’t really think it matters”
Me – {head explosion}

For the most part, he’s pretty good though. It’s just little slip ups like this which get him into trouble.. :) 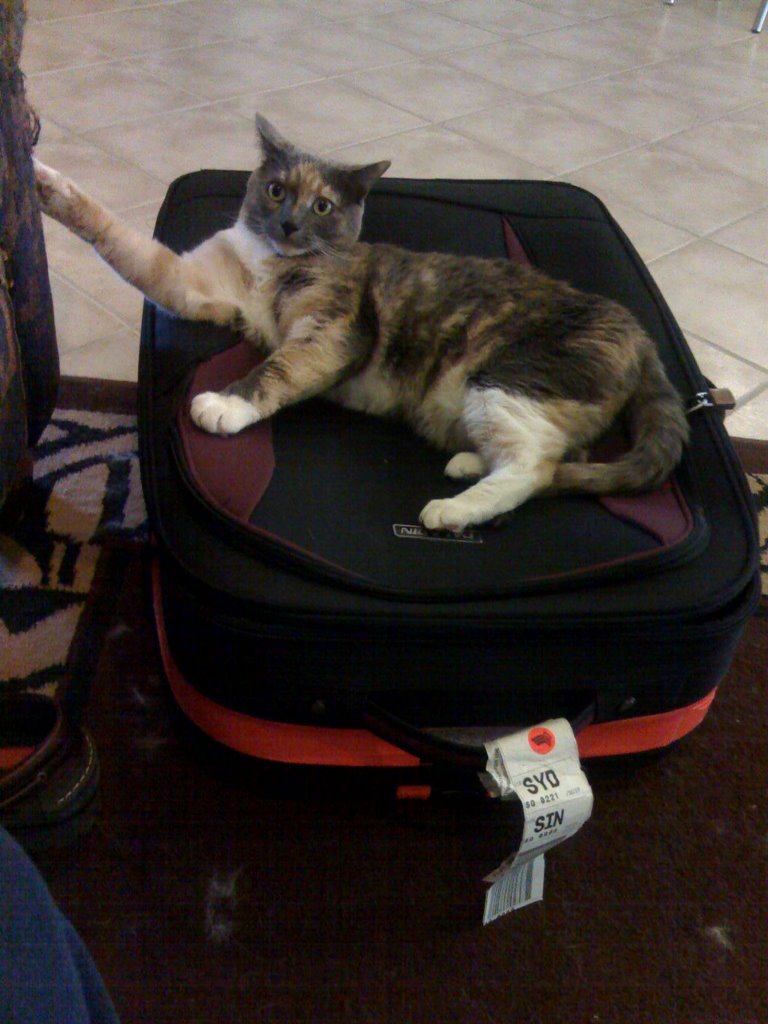 They both want to sleep on The Other Half’s suitcase. At the moment it seems Big Kitty has won the prize, but it’s only a matter of time before Grumpy turns up to have another shot at the title of Queen Kitty.. :)

How do you like The Other Half’s idea of putting fluro tape around the bag so he would be able to tell which one is his? It worked really well but let’s hope no other travellers spotted it otherwise they’ll all be doing it which will defeat the whole point.. ;)

Yay, now I might actually get some decent sleep. Sorry for the lack of bloggage but it’s been a busy couple of days.. More tomorrow. 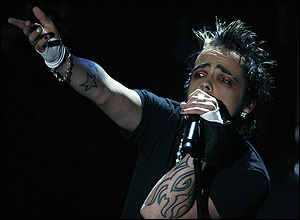 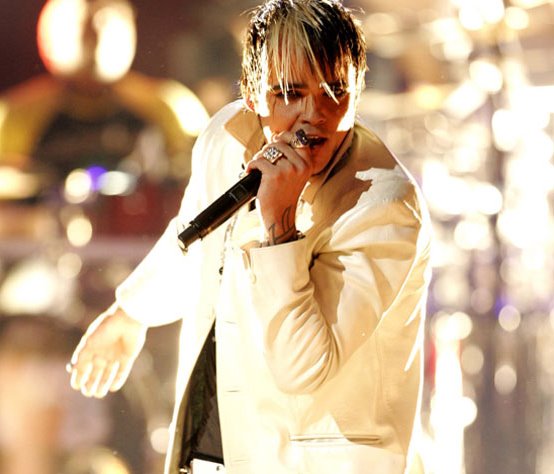 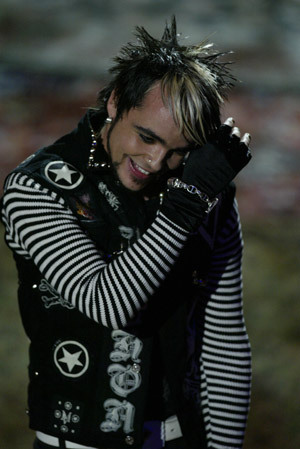 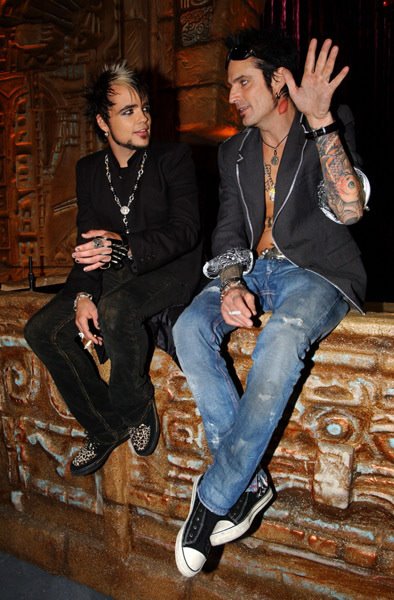 I was really not happy when I heard he won because I think he’d do better on his own, but now having listened to some of the music I am starting to feel better about it.

In other news, The Other Half has apparently been drinking a lot of beer in Thailand as it is the only thing he can get in a bottle and sealed. He doesn’t normally drink beer, and he sounded heartily hung over when I spoke to him. He’s ready to come home, he said.. ;) He gets back Sunday Morning at 6am. Good thing he made us a new washer, cos suddenly ours seems to be not well. :( We may not make it to the arrival of the new one, we might have to walk washing down the street.

I’m going to go and watch the commentary track on A Knight’s Tale – I started watching it but never got to finish seeing it yet.

Ouch! Previous to leaving for Thailand, the other half spent $790 on clothes, three pairs of shoes and a suitcase. Yes, he got a lot of clothes, and yes he needed them, and yes he tried them on in the shop which was sooo much fun for me because it is so rare to talk him into doing that.

However it seems the shopping has not stopped there – and surprisingly, he has not bought electronics or souvenirs or something like that. On the first day of the tour they took the group to a tailor, and he spent $450 on custom made SUITS!

I am completely unable to express my extreme shock and amazement at this news. He HATES those kinds of clothes! And he seemed very thrilled with his purchases, and talked about them at length. And then he went on to say he bought some clothes for ME, and he had been looking at a pair of earrings for me which were $950. Luckily he chose not to buy them, because I would be absolutely terrified to wear them.. but he did buy earrings, he did just not say how much they were..

Was there subliminal messages on the plane? Has someone slipped him a shopping mickey? Are there drugs in Thailand that make your man suddenly change his personality into someone who WANTS to wear a suit?

And most important of all, will he return home normal, or am I going to need to get a couple of extra jobs to support future sudden clothing shopping sprees?

One piece of bad news – he has no internet. :( So I won’t see any pics till he gets home.

Well, a small miscalculation on my other half’s part. Thailand is actually three hours behind our time zone – not half an hour!

Had I known this earlier today, it would have eliminated the.. well let’s be honest.. panic.. when I did not hear from him around the time I was expecting. I’ve just had a funny feeling about this trip from the start, but when it got to 2pm and I was expecting him to land around 10:45am Thailand time, which would have meant hearing from him by say noon at the latest.

I did not realise just how anxious I was until he finally sms’d me. If I hadn’t bitten off all my fingernails by 1pm I would have had crescent shaped marks in my palms.. so it’s a good thing I chewed them all off, right? ;)

And now I just have to try and keep it together and *not* mention all my irrational fears repeatedly. Everything will be fine. People go on overseas trips all the time and come back not much different to when they left. Yes, even to countries like Thailand. At least it’s not Bali. At least he’s not flying Garuda or Korean or some dodgy airline. Yes, he will be flying on the 11th of September, and it is the five year anniversary of that event. keep it together!

They sent all the itinerary and ticket info and stuff through tonight, it’s really exciting. I think he might be starting to get excited and he did not once mention how dodgy he thinks Thailand is or any concerns that he’s been speaking about for some days now.

Tonight I was watching Rock Star and they had this ad for shows they will be running on the 11th and it was then I realised that he’s flying that day. I’ve done it before, and so have other members of the family. It’s nothing to freak out about. Had things worked out as planned, we could have been flying out from London on that date, which would have been a bit of a worry.

I didn’t like to see Ryan go home, and I have no idea what Dilana was doing tonight but that was a terrible performance. I could see Supernova didn’t like it at all.

television shows, The Other Half, travel