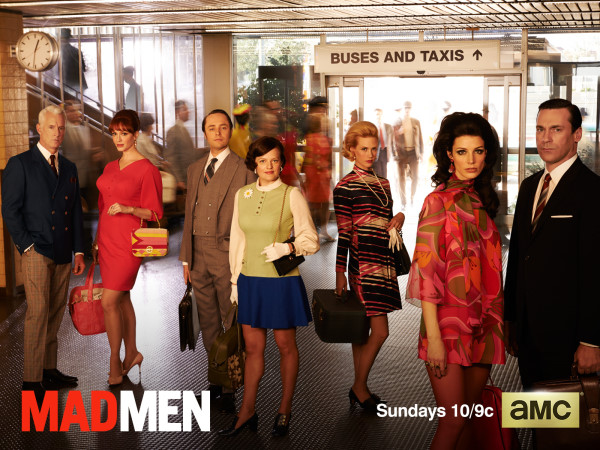 Warning, there may be spoilers ahead, so I’m putting in a continue reading for those who have not seen the show – you’ll have to click through to see the rest of this post.

I think there are two different types of TV shows.

Shows like ER or The West Wing or Mad Men allow us watch the characters live their lives. But with this kind of show, there will always come a point where the show has to end. Does this kind of show end by killing off all the characters? Pretty rarely. I can’t remember a show where that happened, to be honest.

ER was a truly classic case of this – the ER is still there, regardless of where our characters go. It still runs. If anyone wanted to, they could go back to the ER and make a new show there – same setting, and maybe some of the old characters still work there.

The same goes for The West Wing, in fact even more so. We could easily return to the Matthew Santos White House – even nearly 10 years later that show could just pick right up from where it left off. Or the show could start up again with a different president.

Even procedural TV shows like NYPD Blue or Law and Order are kinds of birds eye view shows, in my opinion. Sipowicz is still there as the commander of the unit and life goes on for him and the other characters. We the viewer, are the ones leaving.

Let Us Journey Together

This kind of show is very clear from the get-go that we are going from A to B, or Y to Z. Probably the best example of this type of TV is Breaking Bad. Vince Gilligan, the creator of Breaking Bad, told the world over and over again in a multitude of interviews and podcasts – he wanted to take Mr Chips and turn him into Scarface. The show takes us on an enormous character journey and not just for the lead character, either.

It is possible that some viewers were assuming that Mad Men was a journey show, when in fact it was a birds eye view show. They were thinking because the opening credits involved Don Draper falling from a building that we were heading to some kind of death spiral for the main character. But go back and re-watch the credits. Where does Don end up at the end of them?

Sitting in a couch with a cigarette in his hand. AKA, Life Goes On, just as it always did. Even after the fall. And that is exactly what we got with the finale. I don’t know what people were expecting to see, but what we *did* see was clearly shown to us at the start of each episode. It should not come to us as a surprise. :)

This show was not a journey show. It was not Breaking Bad taking Mr Chips and turning him into to Scarface. This show gave us a birds eye view of our collective pasts from the costuming to the attitudes. Don Draper has been making the same mistakes over and over for 7 seasons, and he will continue to make those mistakes forever.

Their lives will go on without us watching, just like the ER in ER continues on with or without our characters, just like The West Wing continues on with a new president. Mad Men goes on and really the details of how they go on and what they do next are not that important.

So what annoyed me?

– The splitting of the final season into 2 separate 7 episode sets. Breaking Bad did this first with 2 8 episode sets, but the quality was there through all 16 episodes and the story was large enough that there was plenty to see and do, and they still managed to have those slow paced moments that the show always had.

– If all we were getting was life goes on, what was a good reason for the split? I can’t see one. And I’ve looked. If you took out the Megan episode as so many of us want to, we could have had a 13 episode season 5.

– The Megan character from start to finish, she annoyed me. But then they devoted almost an entire episode to her in the final 7. We could have done without that episode.

– The introduction of new characters with not much time left to go in the series. This felt like a complete waste of time, especially the new love interest for Joan, the Bruce character. This also felt like non-important people taking up our precious time with the characters we knew and loved.

The most ridiculous speculation I read was that the exact same woman with the ribbons in her hair was actually in the show *and* in the ad – the ad which aired on the show was made in 1971, you can read the story behind it here, and I’m guessing the woman who was in the ad with the ribbons in her hair looks pretty different now. Unless there has been a time machine created that I am unaware of, this would be an impossible thing.

Yes, there was a woman with ribbons in her hair seen on the show as well as in the ad, but they certainly are not the same woman!

If you are looking for more Mad Men talk, here are my top 3 suggestions –

Series Finale Review @ Tom and Lorenzo – Don’t forget to check in over there for Mad Style on Wednesday.

Even with the issues I felt the show had, especially in the later years, there is no doubt Mad Men was a fascinating trip back through the history of the advertising industry – and while they showed us that, they showed us so much more about our collective history. Incredible costumes, amazing historical accuracy, great characters.. plus they had some true stars in the cast.

Joan Holloway was my personal favourite character on the show thanks to the amazing work by Christina Hendricks but Peggy, Betty, Pete, Roger and Don, the entire cast has been fantastic.

Breaking Bad is still my all time favourite TV show and there are a multitude of others I have deeply loved. Mad Men sits in there with my deeply loved shows. If you have never seen it, I would recommend it to you.

The Best Ending Ever

In my opinion, of course, belongs to a show I have not even mentioned in this post. You may have seen it when it aired. Six Feet Under was uniquely placed to create an amazing ending because it was a show about a funeral home and it had a certain style, each episode began with a death and the show took place around the funeral of that person. I’ve never seen anything like it, and I’m not sure we will ever see anything like it again.

If you never saw it or you want to revisit it, you can click here for the youtube clip.. but BYO tissues, even if you don’t know these characters.. it is so sad and yet beautiful at the same time.

Did you watch the finale? Have you seen the show? Did you like it?

Were you a fan of any of the TV shows mentioned in this post?

9 thoughts on “The Problem With Mad Men”