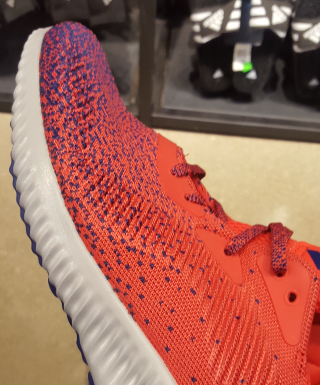 Having been to IKEA, the next goal for me was to find a Walmart to buy a Yoga mat, and then make my way to the Outlets for new shoes from the Adidas Outlet, and they did not disappoint. The instant that I walked into the store, I spotted an awesome pair of shoes that screamed my name. Two pairs of shoes, and a new long-sleeve workout shirt later, I was all set and pleased that I had only spent half as much as I expected.

With that stop done, it was time to venture into Illinois…and head into the Hell that is known as Chicago traffic on a Friday afternoon. But first, I made another stop.

One of my favourite things about the Illinois Tollway are the Oases along the highway. It’s like taking the shops and restaurants from an airport concourse and melding them all into a single building right over the tollway, and then putting a gas station on each side of the highway for fueling up at. A major plus is the view out of the windows – 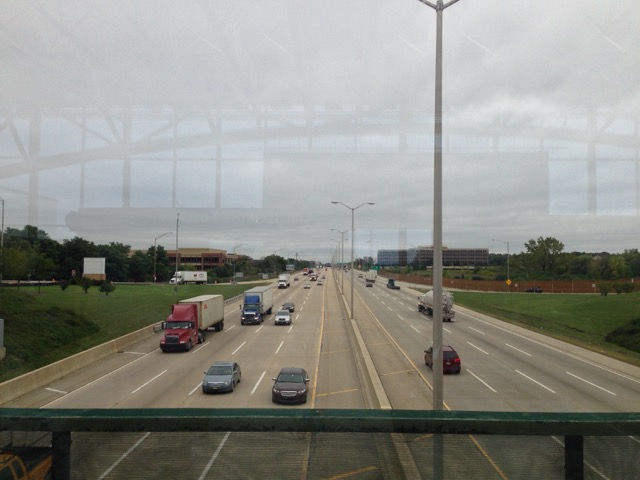 While there, I organised the coins that I would need to pay the toll when I exited, since their automated machines only accept 5, 10 and 25-cent pieces. No notes or cards accepted. I also grabbed a Chai Latte from Starbucks to sip on while driving in the traffic on the way to the airport.

A quick musical interlude: since the car can search tracks in Google Play Music, I asked for it to play, by title, “Road to Nowhere” by the Talking Heads. Google mustn’t have been feeling well on this day, as this starts up:

Maniacal laughing ensues, but I quickly recover and coax it to the right song, and then decide that it’s time to load up some of the club and trance music that I have in my library to help with focussing on the rush hour traffic in Chicago. I get off the tollway via this ramp with 4 payment lanes.

Four payment lanes are great, until you see what’s ahead. Within 300m, you have to merge into a single lane, and then keep an eye out for traffic from the left that could be entering your lane to exit at one of the two exit ramps that are immediately after the merge point. It certainly isn’t the greatest moment in Civil Engineering. The positive for me is that I needed that first exit to access the remote parking lot. 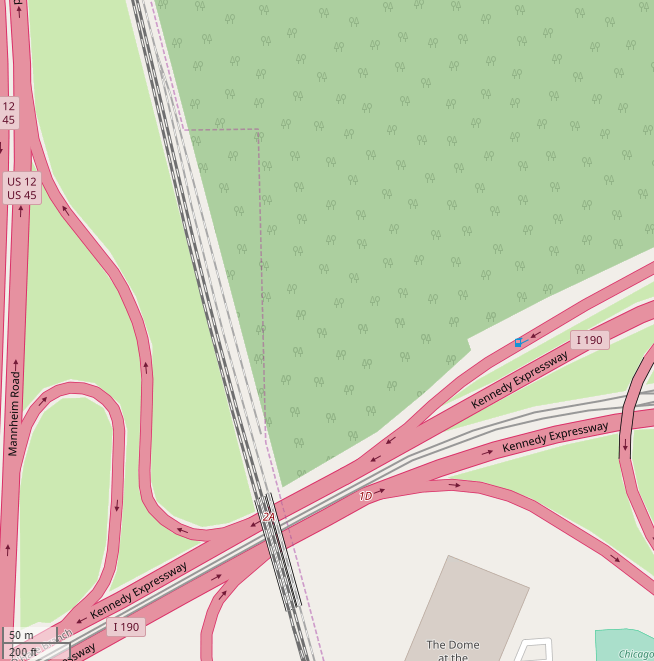 I’m greeted at the parking lot with a recorded announcement in the classic Chicago accent; it’s really a ‘ting’ of ‘bewdy’. The next challenge is to find a parking spot. The first spot I find is in section D12 and right next to a tree, in the blue circle. It was quite a hike to the people-mover to get to the airport. 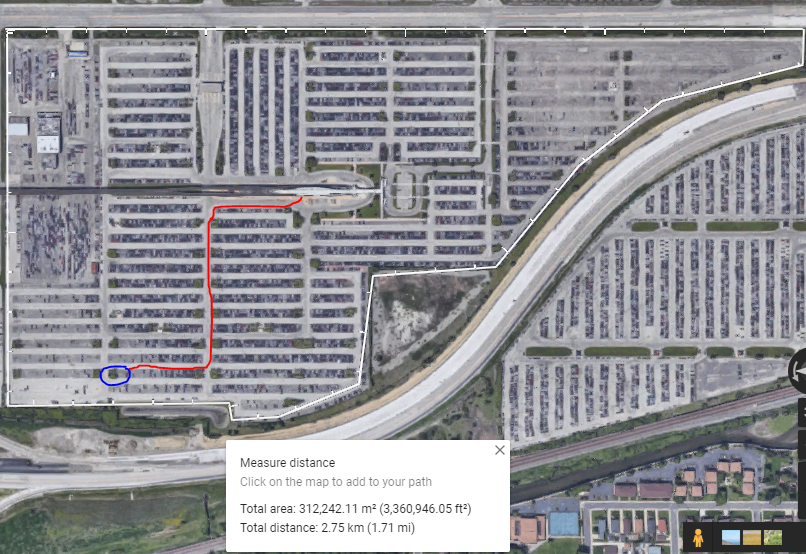 After reorganizing my items to carry them to the airport, I make the jaunt to the people mover and travel to the airport. The check-in at the hotel was straightforward, and I was up in my room on the 9th floor with a runway view after just a few minutes. 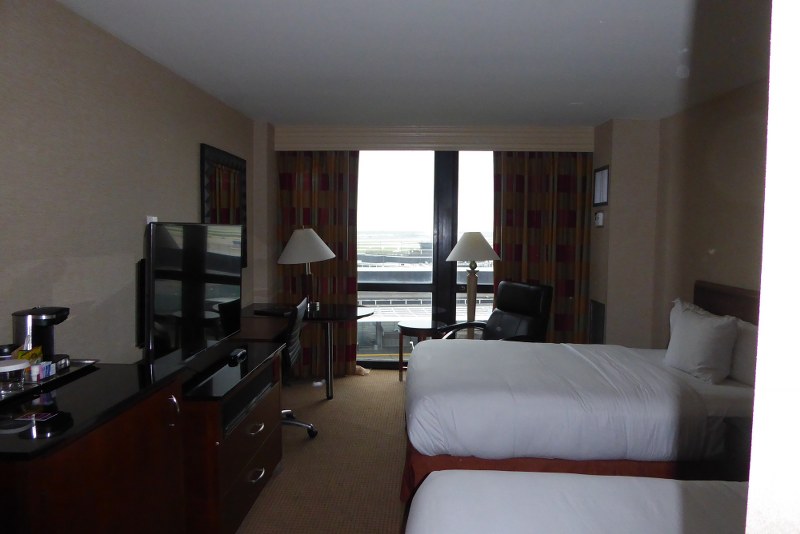 So, what’s the view like? Look one way and you see one tower, the other way you see the other tower :) Here’s the tower to the right – 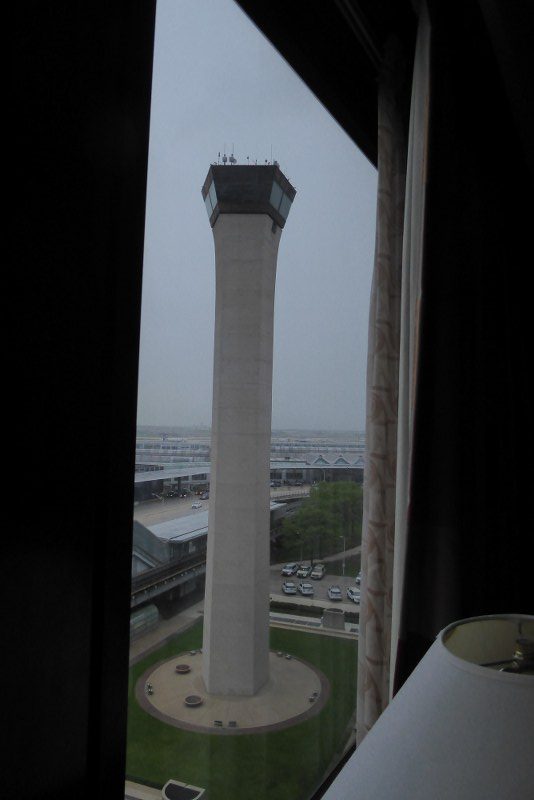 After taking a few minutes to get myself recombobulated, I had a chance to study the tarmac and had the opportunity to see the Queen of the Skies in one of her cargo configurations – 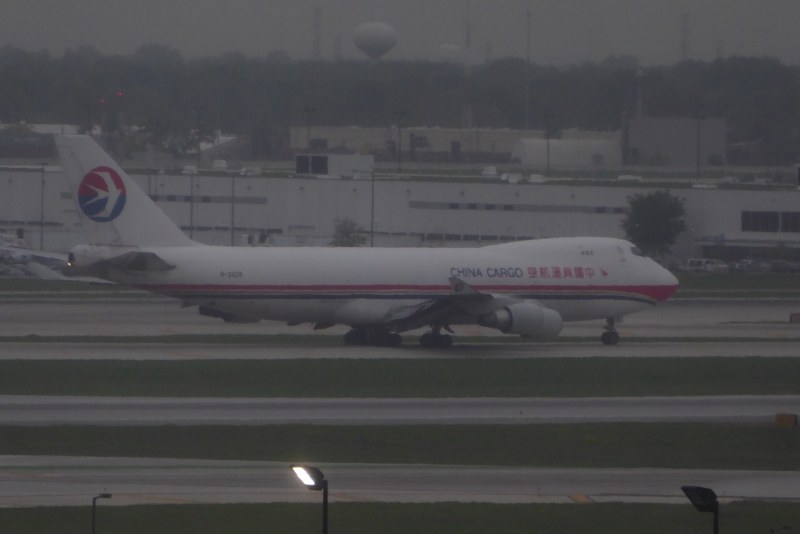 It was now 7PM and time for dinner, so I hop on the train and head to Logan Square, and then on to Fat Rice. During my walk, I was keeping my head up, and the early-1900s flats caught my eye – 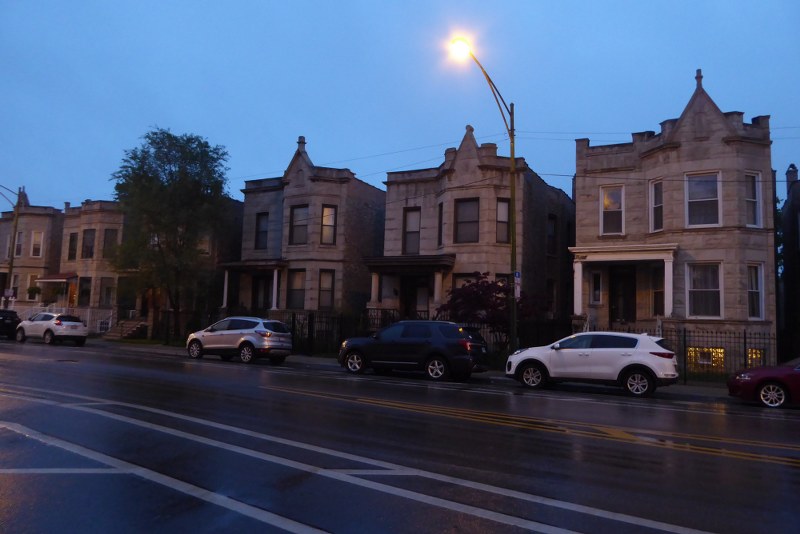 Even though it was raining very lightly, it was still good weather for a walk, and I get to Fat Rice only to find out that it would be an hour for a table to open up, so I went searching for another restaurant for dinner. I find Restaurant Ecuador, which has a high rating on Google and, more helpfully, its menu posted on the window, so I chose to pop in and have dinner there.

A tip if you find yourself at Restaurant Ecuador – Spanish knowledge is a major plus. Even though you’re very much in Chicago, you have to specify to the waiters that you speak English; otherwise, it’s assumed that you know Spanish, which is something that I do know, so I had a relatively easy time chatting there.

When I looked at the menu, one dish sparked my interest right away: Churrasco, which is Steam Steak served with 2 eggs, french fries, lettuce, tomatoes and white rice. I chose that for main main, and also selected an appetiser of Bolon de Verde, which is Plantain mixed with pork skin. The waitress was suggesting that I try it with cheese, but I chose not to this time. While waiting for my food, I had a chance to look around at the surroundings. You can tell that this is a small operation since you have some basic decorations, but nothing outlandish.

After about 10 minutes, my plantain arrives with a small container of salsa: 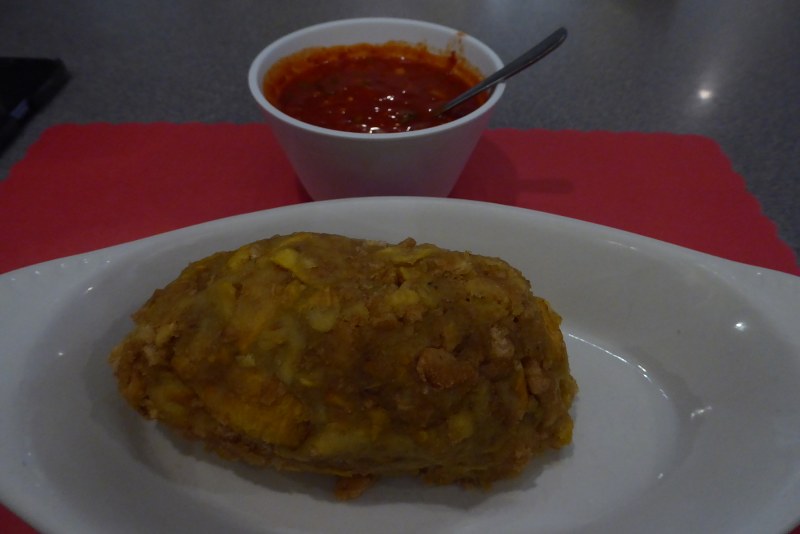 The plantain was soft and the pork that’s in there is crispy to give a nice contrast of textures. What about the salsa? Holy cow, this is knock-your-socks-off levels of spicy, but something that I would definitely have again. Just as I’m finishing up my plantain, the Churrasco arrives – 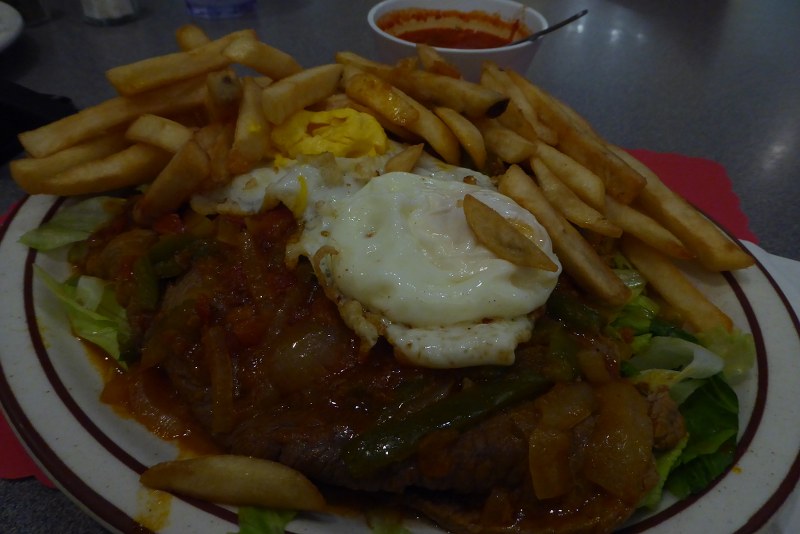 Snoskred and I had been talking about putting an egg on top of my pizza, so it was only fitting that I did get the item that had the egg on top ;) The steak was cooked about medium-well and was quite tender, especially when you combine some of the egg with it. The lettuce and tomatoes on the bottom were a good accompaniment. The only suggestion I would have is to include some different vegetables for more contrast.

Having completed just about half of the plate, I paid the check and chatted for a couple of minutes with the waitress in Spanish about how I wound up enjoying their restaurant.

While I was having dinner, the rain picked up a little bit so I decided to catch a bus back to the train station. A quick look to the east reveals that there isn’t a bus imminently arriving, but it couldn’t be too long, right? I wound up standing out in the rain for close to 15 minutes before abandoning that idea in favor of walking back. It was fortunate since in the time it took for me to walk to the station, I saw two busses heading the other way, and nothing my way.

Getting back to the hotel around 10:00, I wasn’t tired so I decided to take a walk around the parts of the airport that I can access, and come across this sign offering Indulgence, Love, and Beauty at O’Hare- 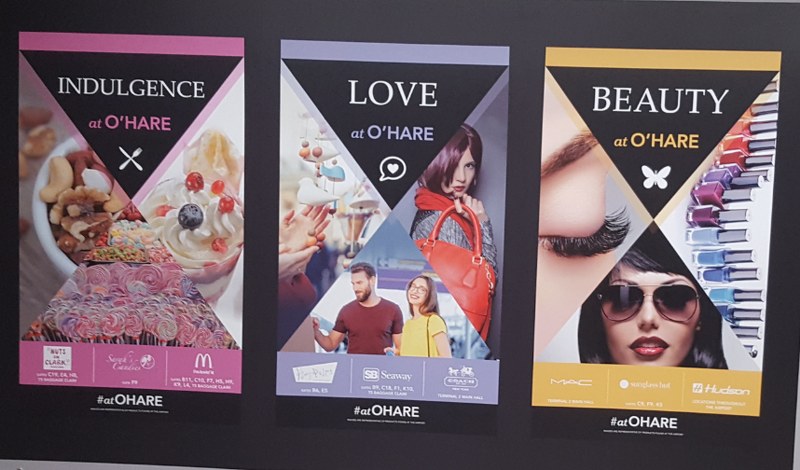 Let’s look at this a bit deeper. Each of the categories features one really strange inclusion…for Beauty, we have Hudson. Hudson run the convenience stores in numerous airports around the world. Now…Love. What the heck is Seaway? It’s a bank. Maybe you can use the money you get from Seaway to love a new bag from Coach, if you can get through the barrier.

McDonald’s for “Indulgence”? It’s a bit of a stretch to consider anything there indulgent. Surely you could find something different, like Eli’s Cheesecake. Or, if all else fails, Dunkin’ Donuts: 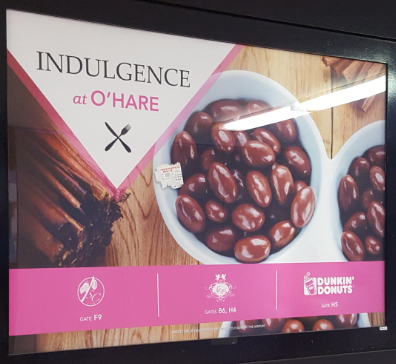 Making it back to the 9th floor, it’s time to settle in for a night’s sleep in preparation for a full day on Saturday, which will come next week. :)

One thought on “The Chicago Trip, Part 2”