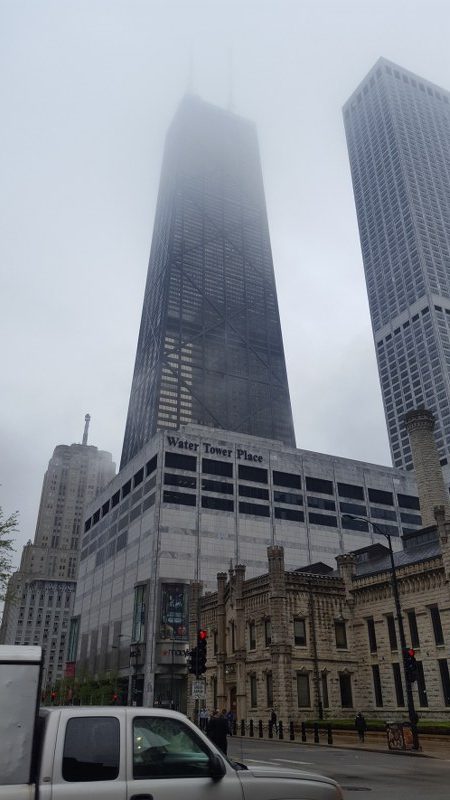 After what proved to be a very long Friday, Saturday came early, with alarms set left, right and centre as to make sure I was out of my hotel room in time to get to my 9AM yoga session, and I was successful, being up around 6AM and on the train by 7:45.

Getting off at the station, I was presented by what used to be these payphones, now replaced by a small mural of public phones around the world. Nice art, but not terribly helpful if your mobile is flat! :) 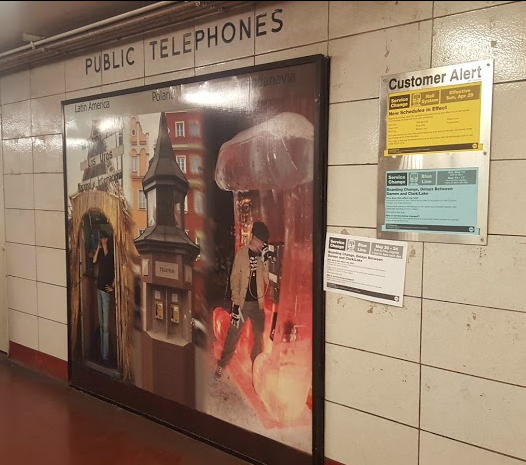 A short bus ride and walk later, I made it to 875 North Michigan, and headed to the 94th floor to get checked in for the class. The class was a straightforward yoga class; the highlight of which was doing tree pose with a partner – in this case the leader’s second-in-command was my partner. While tree pose can be quite treacherous, with a partner it’s quite a refreshing move, and so much easier.

After the class was over, I left the yoga mat behind as I had planned, but it wasn’t alone as there were other yoga mats in the corner for those who may have forgotten to bring a mat, which is a good tip especially if you’re travelling from further afield.

With the fog as thick as it was, there wasn’t much in the way of photo opportunities outward, unless you’re interested in the lake and seeing Lake Shore Drive. 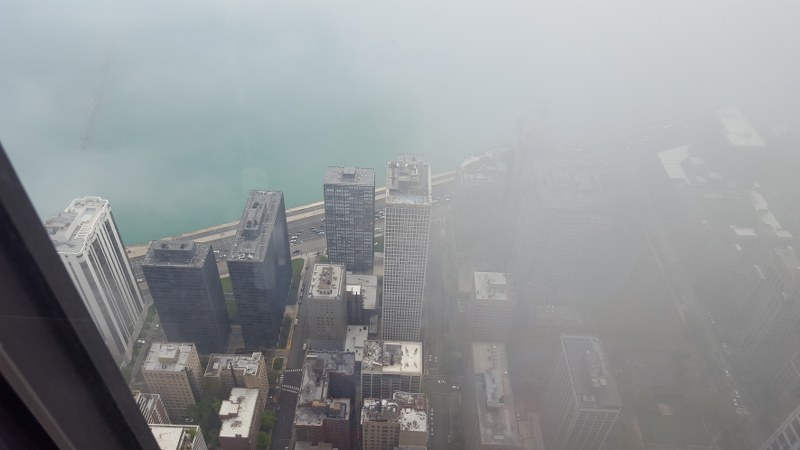 Then we come to this – the actual skystone (not cornerstone) that was installed in the building when it was going up. The inscription states “This Skystone in the shape of a contemporary space travel vehicle was raised to the 100th story of the John Hancock Center on May 6, 1968. After public display, it will be secured and sheltered at the top of the building. Members of some future generation will break the time capsule’s seals and find within a collection of artifacts and microfilmed documents and photographs reflecting interesting aspects of the history of Chicago, Illinois, and the United States of America” 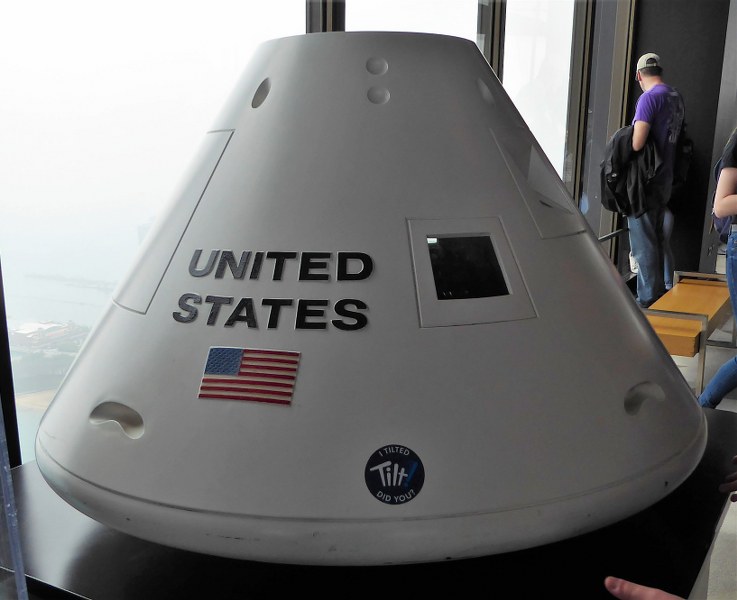 The “some future generation” happened to be my generation, as it was opened on March 12th, and the items in the Skystone, including baseballs signed by the two teams as well as a piece of the Eiffel Tower, are on display right next to it. 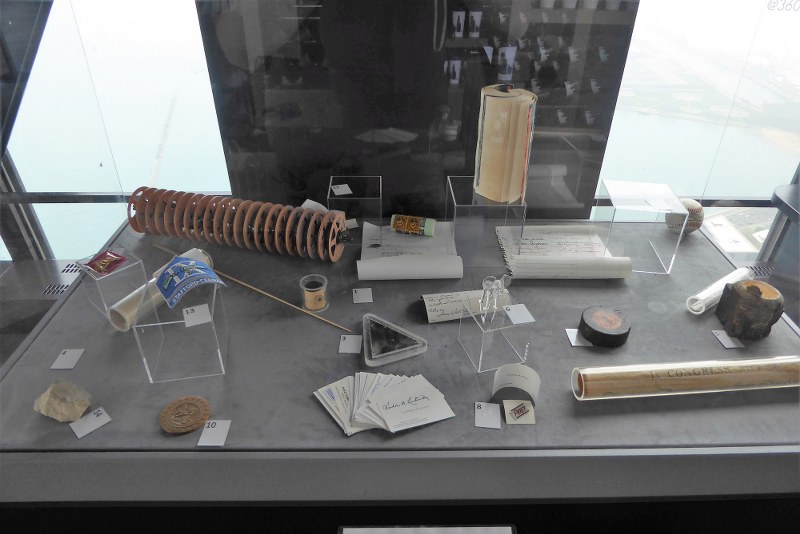 I wasn’t nervous about going on TILT, but if you are, there is a solution to it. Alcohol. ;) The line goes pretty fast, and not much later it was my turn to get in the booth. At first, it’s not too bad, as they start you out with a very small angle, but after a moment or two, you’re leaning out over the city at about a 45 degree angle! It seems scary, but the adrenaline carries you through the experience – an experience made better by the fact that you have grab bars to hold and, as such, are not permitted to take your phone or camera to put in your hand.

If you’re in Chicago, it’s well worth buying a ticket to not only 360 Chicago, but spend the extra $8 and go on TILT…for such a thrill, it’s really a bargain, and make sure to buy the commemorative photographs they make of you on there. In fact, the only souvenirs I purchased in the entire trip were the photographs and magnets of 360 Chicago.

I was off to Navy Pier, but I needed fuel both for myself and my phone. The phone got situated with a stop at Best Buy for a portable charger, and I fed myself via the different shops in Water Tower Place – namely foodease, which features items from different restaurants and local sources such as appetizers from Joe’s Crab Shack and vegetarian quesadillas, plus “pickled things”, and Wow Bao, featuring steamed buns in an Asian style and Thai iced coffee. 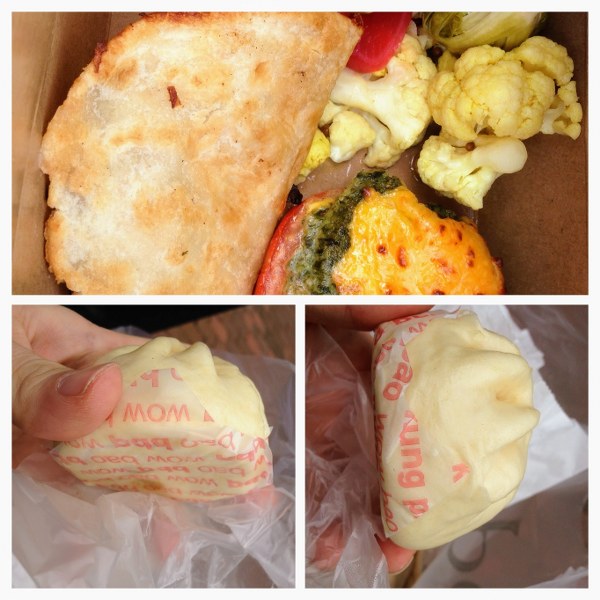 I enjoyed my meal in a small park next to a fire house across from the Children’s Hospital. A block down the street was the beginning of the Northwestern University Chicago campus which houses the Law and Medical schools. Around the corner was one of Chicago’s Divvy bike sharing points, and I decided it was time for a change, so I rented a bike…the last time I rode a bike was three years earlier in the same situation.

I was still rusty. So rusty that I didn’t even pedal the bike, just walked it and glided along, almost crashing into a wall while going downhill, so the bike was quickly returned to the next station and I walked the last couple of blocks to Navy Pier, ready to begin my Pokemon adventure. 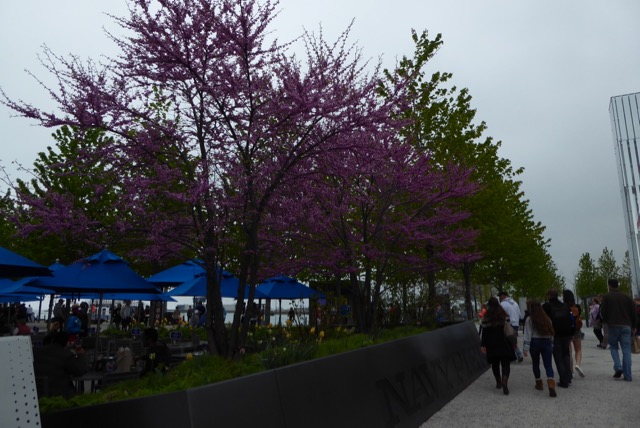 While my initial plan was to be solo, I actually wound up spending the entire time with 3 folks from out of town, and then our group seemed to expand one by one, but the core group of the four stayed together catching these little guys – 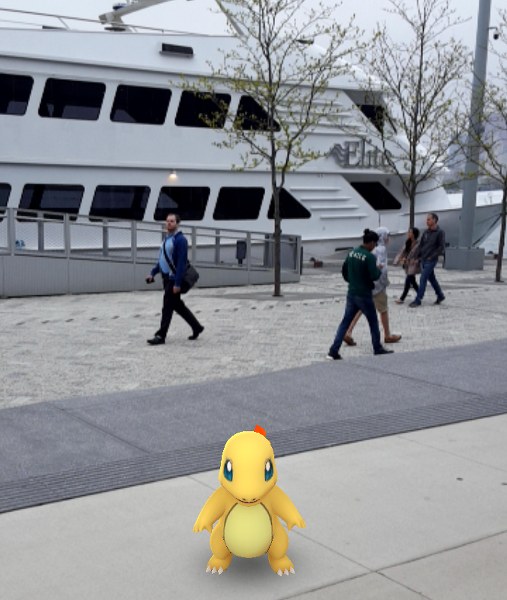 The highlight of the time for me was when one of the major raid bosses popped up, there was a mass of humanity that descended upon the site, and at least 3 groups of 20 formed right away. Nearly everyone in this picture is playing the game here! 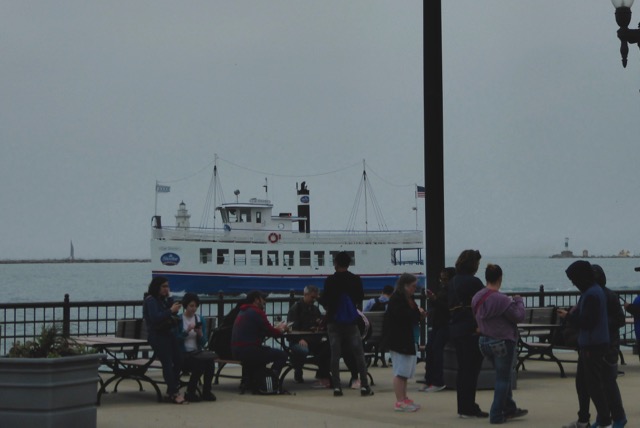 As the time wound down, I noticed that my feet were starting to hurt. Why? I decided to wear my new shoes. Not a wise idea when you walk over 7 miles in a busy city. Nevertheless, I still had one thing to do before going over to the theatre, which was to go to Millennium Park and the BP Bridge. Since the original plan was to go there during the 3 hour event, I was somewhat behind. I still made my way down there by foot with a cameo from the President of Poland’s motorcade, along with hopping on another bike and actually using the pedals this time, instead of acting like Fred Flintstone.

The parks connected by the BP Bridge are a bit different to each other. On the east side is Maggie Daley park, designed for families to have a nice day out with miniature golf, a rock climbing wall and a whole playground for the kids. You then cross Columbus Drive via the BP Bridge to Millennium Park. Millennium Park is just about one square block of green space, along with two buildings that are waterfalls with illuminating faces on them. The folks and I who were watching tourists get into the water in the centre didn’t quite get it…especially on such a cold day. 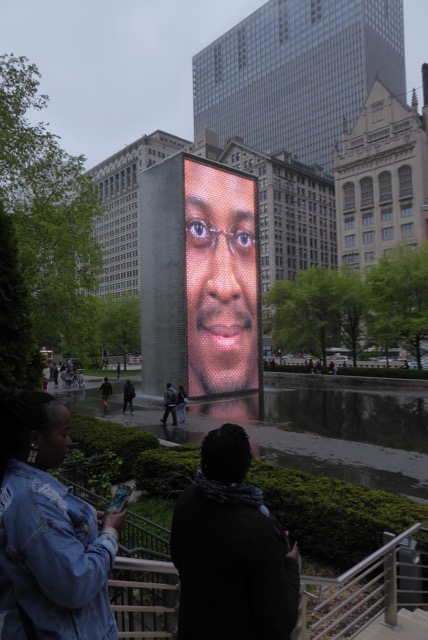 Next up, I took a quick swing a block south of Millennium Park to the entrance of the Art Institute of Chicago to get a picture of the Lion (One of a Pair, North Pedestal) in front – Getting somewhat drained, I managed to find myself at a coffee shop to enjoy a mocha while getting the chance to give my feet a rest for a bit before walking on to the next stop, which was at Luke’s Lobster City Hall, which I managed to actually miss the first time past and had to backtrack around the corner back to the restaurant. I had the Luke’s Favorite – a lobster roll, coleslaw and bag of crisps (salt & vinegar). I also had myself the rare soda, in this case a local ginger soda. 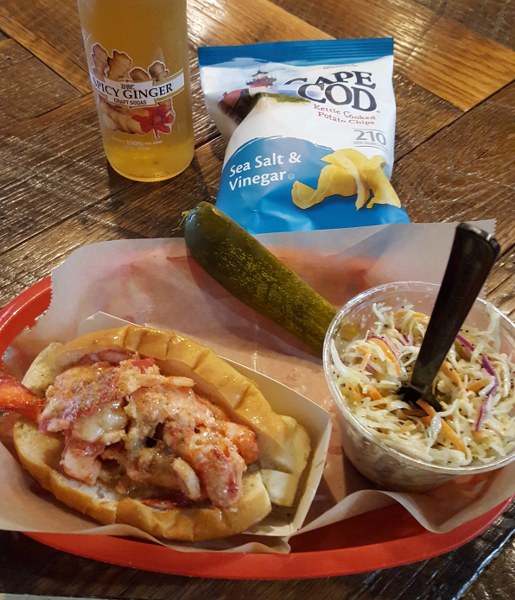 There really are no human terms to describe how amazing the lobster roll really is. You just have to try it; you won’t regret it!

It was finally time to go to the show! What can I say about the show? Rob Lowe is freaking hilarious, especially when he tells stories about sharing his After School Special, “Schoolboy Father” with a girl who stated her dad was an actor. His name, not known to Rob until rocking up at their house? Cary Grant. He left after watching the show with nearly a lifetime supply of soap on a rope shaped like a microphone. He also shared the story of when he was a part of, well, this:

He told so many stories, but I’m not going to spoil much of what he said here :) Though the concept of a porterhouse steak requiring a “hat” made of butter is, well, different. It was something that Chris Farley did when he was eating at a restaurant with Rob and some other cast members on a show they were doing together.

The show lasted about 2 hours, including a Q&A session with Rob, where I was mildly disappointed that his dad didn’t ask any questions of him, which I’m sure would have been a blast! I now want to (finally) read his two books – Stories I Only Tell My Friends, and Love Life.

I picked up my bag from the coat check, and hopped on the train back to the hotel via the O’Hare station and these neon signs – 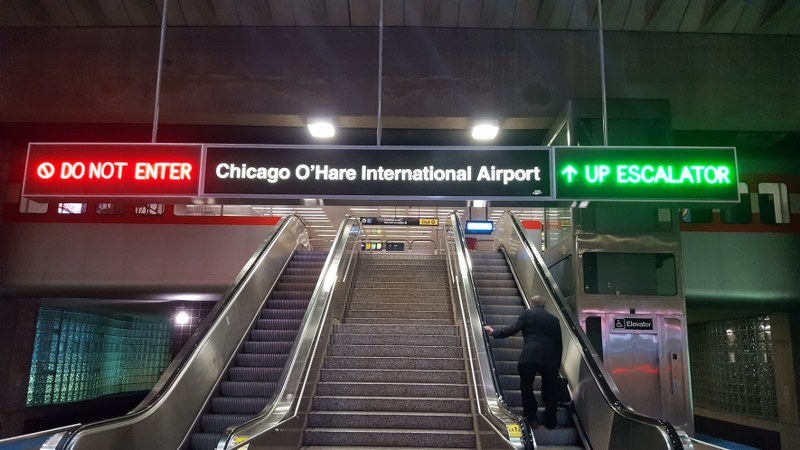 I was ready for another good night’s sleep to be fresh for the drive home, with a few more surprise stops along the way.

3 thoughts on “The Chicago Trip, Part 3”