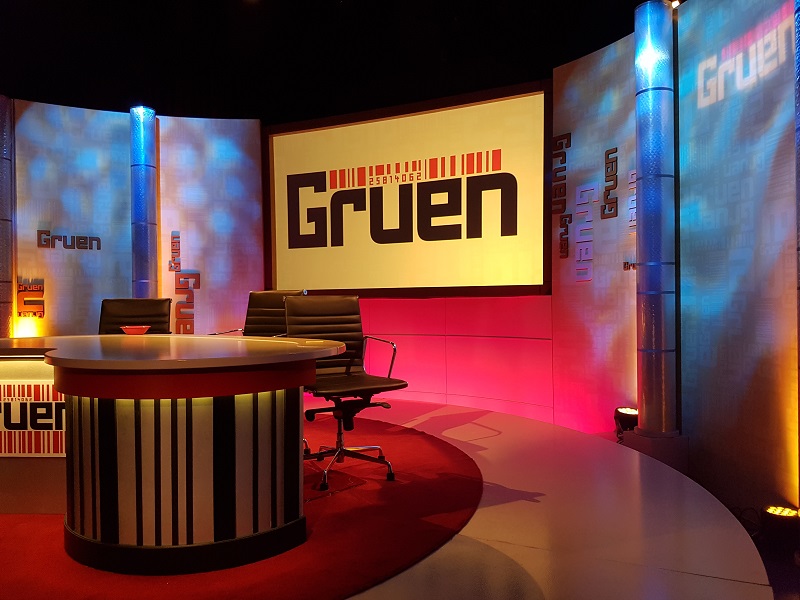 While surfing The Facebook in early May, I happened upon a post from Gruen a mere 2 minutes after it was posted about getting tickets to be in the studio audience. I clicked on it and was surprised to find 2 tickets now on hold for me. I never wrote here about our last visit to view a Gruen taping. That was many years ago now, I believe 2010 or 2011. 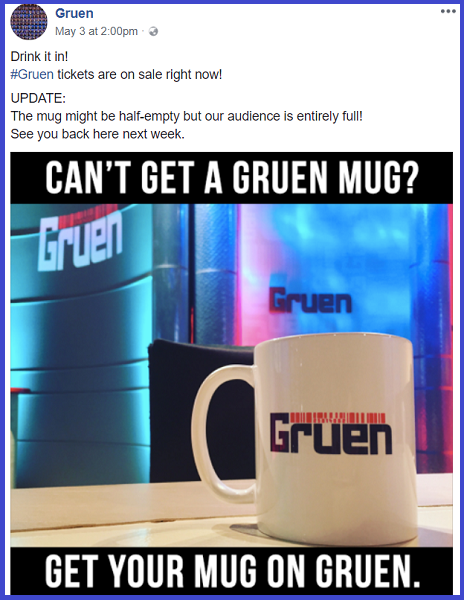 Being a member of a studio audience sounds like it would be fun but it is actually hard work. You have to clap, a lot, till your hands are red. You will laugh and cheer a lot. You will get to see more content than will appear on air and behind the scenes stuff happening right in front of you, there is also the chance that you will appear on the teevee as a surprise to yourself.

You can’t take me anywhere, though. It turns out I became a member of a “terrible audience”. :) Of course the night we went was this night.. OF COURSE. As always there is far more to the story and there are some outright untruths in that article.

For us it started with a Tuesday drive down to Sydney during “school” drive time, which can be a bit of a nightmare in itself. Our GPS had us arriving at 5:39 and we are supposed to be there at 5:45. Luckily I had emailed someone from the show letting them know we were coming from far away. They put tickets aside for us. Whew.

It is not that far to drive but apparently the GPS thought it would take us 30 minutes to travel the last 5km, and the GPS was actually right. If you are like me and quite used to the GPS over-estimating your arrival time, I think they have fixed that small problem because the arrival time was spot on. The Other Half dropped me off so he could go and park the car, and once I got there I found a long queue to go through security, so I messaged him to take his time.

I am a big planner of things like this, down to where we will park the car and checking to make sure they will be open – we parked in the carpark attached to Market City which is 24/7. We also had planned food options, and this was a planned spend day for us. But on the way up we discovered they were closing the highway to get home that night. 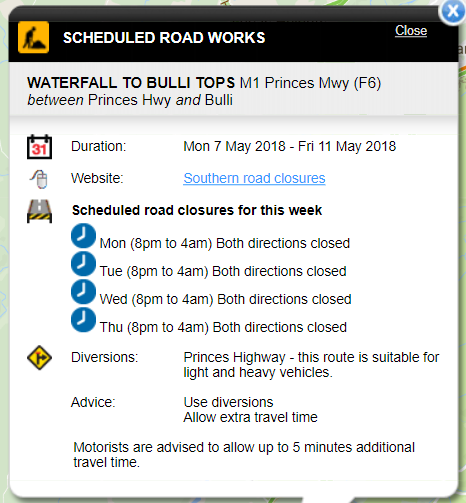 So that was a surprise. At least we would not have to go miles out of our way, the old Princes Highway runs pretty much alongside the new one. We made our way through security and then received our tickets which were priority seating, and that meant we got to go sit on some lovely couches and wait to be called into the studio first. 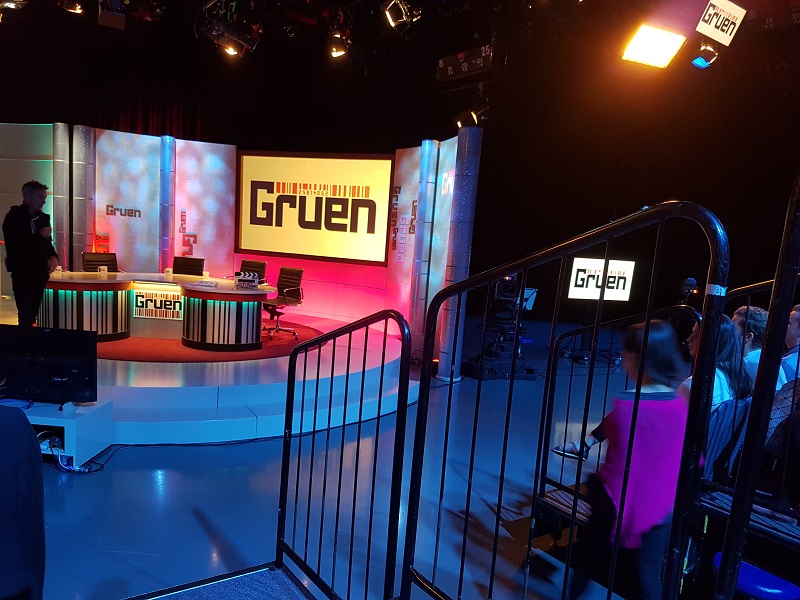 We picked some seats right on the aisle, and settled in to watch the goings on. Note there is an entire section of seating where they cannot see the taping – they get to watch it on a tv screen. That is where we sat last time, and that is where you get placed if you arrive late, unless you got in touch and made arrangements which they do for people from out of town plus the disabled.

I’d taken a poncho because studios can be cold and I wore it like a knee rug, tucking it in. There was point where I wished I’d folded it up and sat on it. The seats are not very comfortable. BYO cushion, folks, if they will let it through security that is.

The “warm up guy” for Gruen and a few other ABC shows is Tommy Dean, who I find super hilarious. He road tested the audience, and despite all the noise we were making, we could still hear him. Take note of this point, it will become important later. Tommy had a proper microphone.

Then Wil Anderson comes out and warms up the crowd a bit. Though this does not always go quite as planned, and I am shocked that the “audience member” did not mention the little girl who was crying as he was talking to that side of the audience. I guess they could not blame that on Wil, or maybe they were keeping it secret for a spicy followup.

I’m not sure why she was crying, but the crew checked in on her and she was fine. I’m also not sure how she got in the audience as the minimum age is 15 and this was a girl of 6 or 7. It might have been all the swear words Wil was using. But note to folks, Wil does swear.

Wil explains a little bit about how things will be done, and then introduces the panel, and they all sit down and the show starts. This is where things began to go wrong, though none of us knew it at the time and it was not until after the taping when The Other Half and I sat down to dinner that we figured out the problem – none of us could hear the panel over ourselves. If we laughed or clapped or reacted, all we saw was mouths moving and we could not hear what was being said.

Once the audience caught on to this, things got very quiet. Everyone wanted to *hear* what the panel was saying. Nobody thought to say to the nearby crew – are we meant to be able to hear them talking? We had no trouble hearing the panel last time we were here.

So after the first part of the show, Wil spoke to us all and basically said we were a shit audience and he needed more energy – I assumed comedy and he was trying to get us to fire up, not have a go at us, but there were some delicate snowflakes behind us who were so offended, they started bitching about Wil right away.

While they were bitching, a member of the audience (clearly to my mind a fan of Wil) started heckling Wil about how they should replace him with the host of Spicks and Specks, Adam Hills. They went back and forth a bit and that is what Wil was saying f*** off to, not as claimed in the article.

Anyway his speech did work, it did fire up the audience, but for the rest of the show none of us could hear what was being said when we were laughing and clapping. It wasn’t until I watched the show that I got to hear some of the jokes. There was a point where Tommy was talking to the panel, and we could clearly hear Tommy but not the panel. The last time we went, we had no trouble hearing. So I suspect there was a sound problem.

I would have continued to assume comedy if Wil had not made those comments on radio the next day. I had already sent a thank you email to the Gruen staff member who helped us out with the tickets and I had mentioned the sound problem in that email. I did not expect this meltdown story to be the headline news story on news.com.au after the show aired that night.

I am pretty sure the “audience member” was sitting right behind us because they were very vocal about their displeasure – though I did not notice it at the time. I was focused so hard on listening to the panel. The Other Half told me what the people behind us were saying at dinner. And speaking of dinner.. we went to Fusion 16, where The Other Half had a gorgeous steak with INCREDIBLE chips, and I had a delicious chicken and mushroom risotto.

Then we got in the car and drove home, arriving just after 12:30am. It was a long day out, but we enjoyed it, for the most part. I just wish we had been able to hear the panel better. The show is taped on Tuesday and airs on Wednesday night. If you are in Australia you can still catch this episode on iView for a little bit longer, and if you are not from Australia, I believe you can see a short 3 minute clip from the show on Twitter here.

Total spend for this day was $77, that was dinner @66 and parking @11 which is incredibly reasonable for Sydney, especially as we were parked there for almost 5 hours. Market City is also the location of Paddys Market and we have parked there quite a few times, it is not very far to walk to Darling Harbour from here nor is it very long walk to the “main” shopping strip of Sydney, about 1.5km.

As Tommy Dean said in his warm up, it is much easier to watch tv at home. Even so, I would recommend going to a show taping at least once in your lifetime. :) Have you ever been to one? Would you go? If you could go to sit in the studio audience of any show, which one would it be?

8 thoughts on “The Studio Audience”