I had zero plans to garden this year. Three Sydney Funnelwebs have been found on this property since Autumn. For those of you not familiar with this creature, it is extremely venomous and quite aggressive. Never fear, there are no spider images here. I would not do that to you! Arachnophobes know better than to post certain pics as a surprise to other people. 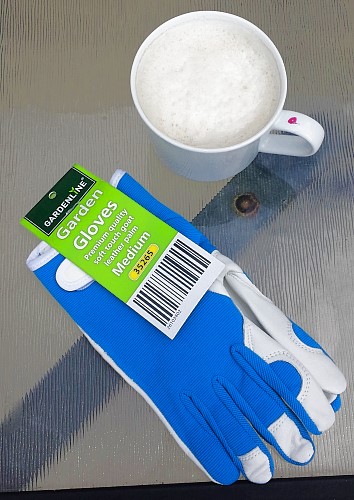 But then, I saw these gorgeous gloves at Aldi, and I re-thought my zero gardening plan. Maybe I would feel more comfortable wearing a pair of substantial gloves. We tried them on – The Other Half got large ones, my hands fit perfectly into medium. 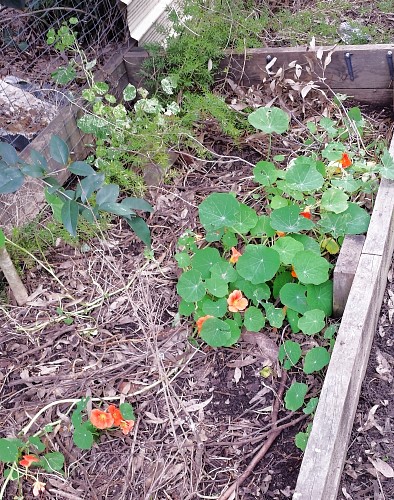 My zero plans were quadrupled into “no *#@!&*%$ way am I gardening this year” when two absolute nitwits posted images on a local community group of Sydney Funnelwebs they had found out and about after the floods. UNSUBSCRIBE ME URGENTLY! I left both groups. Life is way too short for spider images on my Facebook feed. The damage was done, though. My skin crawled for an entire week. Not cool at all! 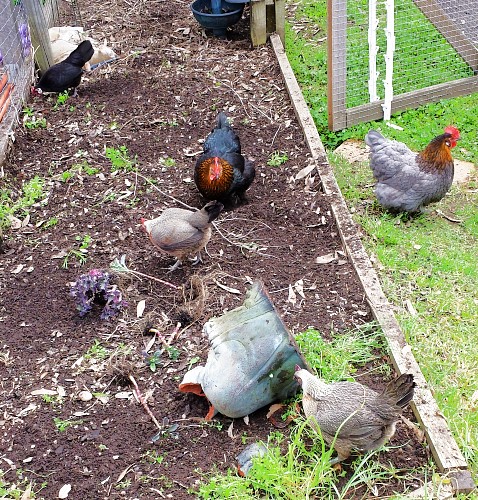 These people had put these creatures into plastic containers with sawdust, which implies keeping the creature long term. That freaks me out. Plus I feel like it is a bit cruel to the spiders. Not quite as cruel as what my chickens do to them which is dead them and eat them. But if they are found on my property, I’m backing the chickens 100% – dead them and eat them, girls! 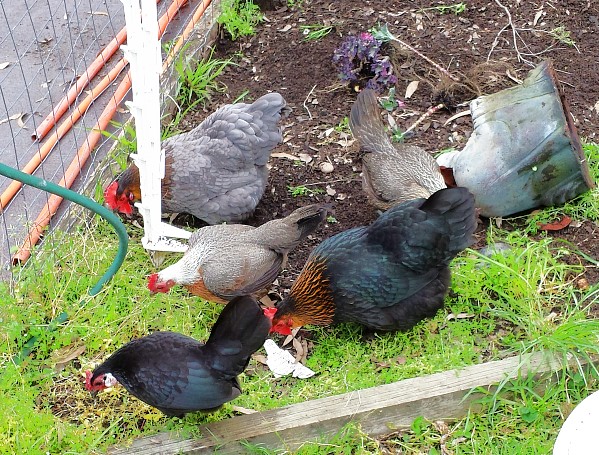 Gardening this year was back on my agenda despite the images, because the chooks have been getting plenty of free range time and they have been spending a lot of it in the garden bed. I’ve compromised with a – sort of – gardening plan.

I decided to put some baby spinach, silverbeet, and brussel sprouts into the large planter box. I’m not sure how it will go because last year the kale was a massive failure in there – many moths laid eggs on it and they never grew the way they should have. I might end up screening this planter box in, if that happens again this year.

Into the large garden bed, I planted two Nasturtium plants. There is already one Nasturtium down the back and when the chooks are in the garden bed they mostly leave it alone. There are bugs to dig for, ain’t no chook got time to be eating plants! If I pull some out and throw it into the chook pen they gobble it up with great glee, because they have usually already eaten all the bugs in there before midday. I will buy any new varieties that I see of this plant because I love the flowers *and* humans and the chooks can eat it. 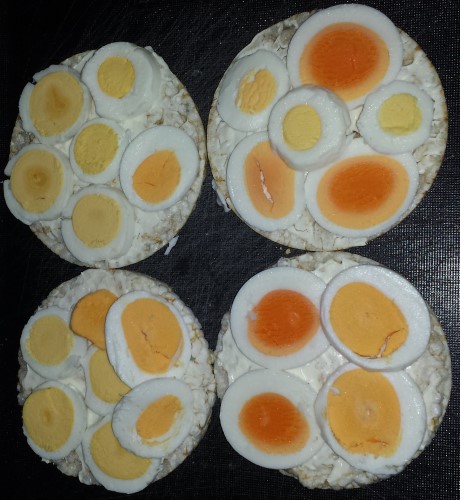 The chooks are on the lay again – on average I am getting 3-4 eggs a day. When I make my snacks, I sometimes mix a Manning Valley egg in with the girls small eggs, which are the largest ones they sell.

If I were *not* an Arachnophobe, I would post a picture of this little orb weaver which I see every single day when I check the chook coop for eggs. It has found a tiny home in a small screw hole on the chook pen and every day when the sun rises, it folds itself into this teeny spot.

I’m ok with certain kinds of spider making a home around the chook pen – they help with catching mosquitos and flies. Once I know where the web is, I am not likely to walk into it by mistake. The only thing that spider has to worry about is the chooks, who will eat any spider they see. Luckily they cannot reach where it is, nor could they see it unless he moved. It is well camouflaged. My little friend will find many tasty treats this spring and summer.

If I see one of those scary aggressive venomous creatures, I’m probably going to want to be on the next flight to Antarctica. I’m certainly not going to be putting it into a plastic container, nor will I be trying to kill it myself, and there will be a lot of screaming.. You’ll hear it, wherever you are.. :)

Would you like to join in with Sunday Selections? The rules are very simple:-
1. post photos of your choice, old or new, under the Sunday Selections title
2. link back to River at Drifting Through Life, somewhere in your post
3. leave River a comment so that she knows you’ve joined in and can come over and see what you’ve posted.

Loads of goings on here at home, but nothing especially exciting that has not already been turned into a future blog post. My readers who have zero interest in Mr Robot can skip this next bit because it is a Mr Robot Finale Festival! ;)

The Mr Robot finale was awesome in some ways, but also slightly disappointing in some ways. I think the extra week of waiting meant that my expectations were very high..

Alan Sepinwall said “What a fascinating, off-kilter, 100% “Mr. Robot” way to end this season” and on reflection I have to agree with that concept. I have not re-watched it yet purely because I did not feel ready to – I’m letting it sink in first. One thing I do know, that scene in Times Square was an enormous explosion of colour in a usually quite muted show colour palette. 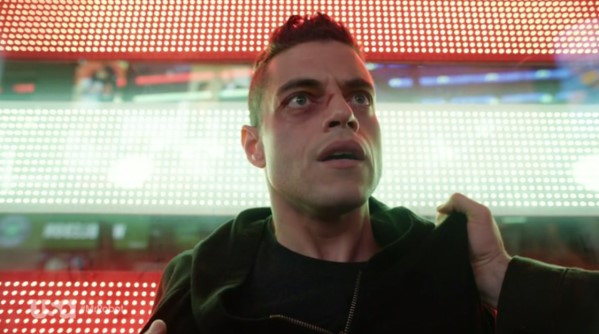 I’ve collected up a roundup of interviews and linkage for you. SPOILER ALERT – there are spoilers in these interviews. You do not want to click unless you have seen the entire 10 episodes of Mr Robot.

‘Mr. Robot’ Star Rami Malek on the ‘Emotional’ Season Finale (SPOILERS)
Rami Malek of USA’s ‘Mr. Robot’ | ‘The Andy Greenwald Podcast’ – This interview is older but was deeply excellent. Grantland has a lot of Mr Robot content – Grantland – Mr Robot
Rami & Twin Sami on Jimmy Kimmel – Having a twin is a great way to figure out what you would look like with a beard and a different hairstyle.

BD Wong on Why Mr. Robot’s Portrayal of a Transgender Character Is Radical

Sam Esmail Joins Andy Greenwald To Discuss ‘Mr. Robot’ First Season This is an hour long video interview – it was brilliant
Mr. Robot’s creator ‘did everything in my power’ to telegraph the big twist
Mr. Robot finale: Creator Sam Esmail answers burning questions
‘Mr. Robot’ Boss Talks Finale and Season 2: Elliot “Is Past the Point of No Return”
Mr. Robot Creator Sam Esmail on His Plans for Season Two and What the Show Is Really All About
‘Mr. Robot’ Finale: Series Creator On White Rose, The Wellicks & Elliot’s Memory Dump In Season 2
So… what did you think? – Sam Esmail asked what people thought over on Reddit and he also replied to a few of the comments.

Opinion re the finale –

How the Mr. Robot Finale Tumbled Backward into Its Most Piercing Social Message Yet
How Mr. Robot Killed the Centerpiece of Prestige Television: Capitalism
How Mr. Robot Became One of TV’s Most Visually Striking Shows
Mr. Robot had a perfect season on Rotten Tomatoes

About the mail program Elliot uses –

‘Mr. Robot’: How A New Product Feature Was Incorporated By ProtonMail After Discussions With The Producers

Anything interesting happening in your world? :)