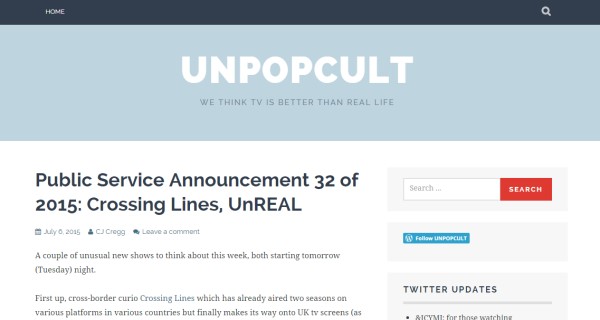 Unpopcult has been one of my most favourite television blogs for a long time now. So as a part of my new blog series – Snoskred Faves – I sent off a few questions to CJ and Jed, and here are the answers.

You are both named after The West Wing characters – Jed, what is it about Jed that made you choose to use that name, more so than Josh or Leo or Toby or any of the other male characters on the show?

JB: A hasty decision. I conceived of and set up Unpopcult in the course of an evening, and as it was always intended to be about (predominantly) American TV I chose a name from my favourite show. If I’d thought about it a bit longer it would have undoubtedly been Josh Lyman, and if I’d known we’d still be going over seven years later it would have been something else entirely. But it’s stuck.

Jed you and I were both big fans of Dexter up until the end of seasons 4 or 5, around there somewhere. Looking back at the show now, is there one particular scene or moment from the show that was your most favourite, that stands out to you?

JB: The death of Doakes at the end of season 2 – I’m not sure the show was ever quite the same afterwards – and the scene in the first episode of season 4 where the Trinity Killer murdered someone in a bathtub.

It is my feeling that CJ Cregg was one of the best television characters of all time, so CJ what was your most favourite CJ scene from The West Wing?

CJ: Thank you for giving me the BEST excuse to spend an afternoon messing about on YouTube trying to decide on my answer :-) I thoroughly enjoyed doing “research” for this question and fell in love with The West Wing all over again as a result, but I finally settled on this scene where CJ destroys a reporter (who completely deserves it) in an air-punchingly awesome fashion – Ker-pow!

CJ, You loved ER – in fact I think that is how I first found your website to begin with. Dr Mark Greene and Dr Carter will forever be locked in a battle for best ER doctor in my mind – which doctor was your favourite – or do you have a similar battle going on in your mind? :)

CJ: I feel guilty about overlooking Pratt, Ray and Susan Lewis, all of whom I loved to bits, but, as soon as I read this question, I knew it had to be a battle between Dr Doug Ross and Dr John Carter. Sigh. I had such a crush on Doug Ross and his bad-boy-turned-good love story with Carol is one of the best ships ever. I will never get over how romantic their reunion (when she just upped and flew to Portland) was and how invested I was in it. But, while Doug was the romantic (if flawed) hero from the start, I feel like I grew up with Dr Carter – we watched him learn and grow and become this beautifully-realised, marvellous, caring character that we wanted good things for, and his return made the series finale one of the most moving things I have ever seen. Actually, I’ve now talked myself round. Dr Carter it is!

How do the two of you choose which person is going to get to review which show?

JB: It just kind of… happens? We now review so many shows that there’s never much of a discussion; one of us will be more enthusiastic about a new show, or one of us will have more space in our schedule, and we’ll offer to review it. Occasionally shows swap hands because one of us is under pressure: CJ took The Good Wife from me a couple of years ago, and I took Person of Interest from her.

Have you ever thought about going back and reviewing The West Wing together or maybe your top 5 episodes, as a sort of team effort? The show ended in 2006 so next year it will be 10 years.

JB: It’s unlikely, to be honest: we now watch so much TV, including the stuff that we don’t write about, that we rarely have time to watch anything on more than one occasion. There’s always something else to watch, or another new “unmissable” show on the horizon. One of the perils of the age of FOMO.

How did the name Unpopcult originate?

JB: It’s short for Unpopular Culture, the blog’s original name. The concept was that we would be a place to discuss American TV shows which got – and still get – hardly any viewers in the UK, where we live.

And now, The Snoskred Five –

What did you eat for dinner last night?

JB: A sort of cottage pie but with turkey mince.

Do you have a favourite blog post on your blog? If yes, can you give us a link to it?

CJ: Not really, but if I had to pick, maybe this one? Poldark s1 e3

JB: I’m almost never satisfied with any of my blog posts after they’ve gone up. Sometimes after a couple of years I can look back and think that an individual post wasn’t too bad, but I’m too self-critical to have a favourite, I’m afraid. The best posts on our blog at the moment are CJ’s about Stalker.

When you were growing up, what books did you most love?

CJ: “The Chinese Egg” by Catherine Storr about two teenagers who try to help find a kidnapped child was one of my favourite books ever. I was also a huge fan of The Chalet School series when I was at school, before wholly embracing my shipping tendencies and moving on to Georgette Heyer’s Regency romances as a teenager. (I still break into the odd bit of Regency slang every now and again.) Oh, and I loved Anne of Green Gables – I started reading that series after watching the glorious TV adaptation with Megan Follows and the late Jonathan Crombie. Lots of shipping there too!

JB: When I was very young, anything by Enid Blyton. After that, I read pretty much anything I could get my hands on. The first “adult” authors I liked, when I was about 12 or so, were probably Frederick Forsyth and Arthur Hailey. Forsyth’s fallen out of fashion a bit these days, and his politics are unpalatable to me, but at the time of publication The Day Of The Jackal and The Odessa File were top-notch thrillers. And Hailey was hardly a prose stylist, but he wrote lovely great big pageturners.

What is your most favourite movie and why do you love it?

CJ: I agonised over this and couldn’t narrow it down to one, so can I cheat and pick three favourites? In no particular order,

– the most recent adaptation of Hairspray because – *puts serious hat on* – it manages to drive home themes of diversity, respect and self-esteem while being hilarious, sweet and having one of the best soundtracks ever.

– Speed because, although it’s completely ridiculous nonsense, whenever I come across it on TV I have to stop what I’m doing and watch it, I love it so much. It’s the perfect fast, fun action movie and Keanu Reeves and Sandra Bullock are great together.

– Wadjda, a Saudi Arabian film about a girl who wants to buy a bike, because it’s an absolute joy. Wadjda the character is smart, strong and tenacious, you’re cheering her on throughout all her struggles, and the film itself is so brave, warm, funny, feminist and uplifting – I just adore it.

Tell us about a TV show you love which is not “popular” eg not Breaking Bad or Game of Thrones – a tv show that is not very well known.

CJ: The Almighty Johnsons! It finished a couple of years ago after three seasons, but it’s a hilarious comedy/drama from New Zealand about four brothers who are reincarnated Norse gods. It sounds mad and it is, but it’s also one of my favourite TV shows ever – it’s incredibly bawdy, but also insanely clever, witty and really moving sometimes. It’s not about superpowers, really, it’s about love and family and brotherhood and growing up and it’s glorious. If you’ve not seen it yet, get cracking!

JB: Perhaps The Americans, which is no longer being shown on UK TV, and which doesn’t have a huge following in America. It’s an astonishingly good show, but I know quite a few people – including CJ – who have tried it and just not liked it. I think it’s up there with the very best TV being made at the moment.

Thanks CJ and Jed!

For answering my questions. :) This has been a most awesome interview!

If you enjoy television, you should add Unpopcult to your feed reader. It is thanks to them that I found my favourite show of 2014 – The Missing. Plus it is thanks to them I have watched so many shows I might have missed out on, like The Good Wife which I have grown to love and Mr Selfridge which is just a beautiful show.

I leave lots of comments over at Unpopcult, quite often on older posts as I go through and watch a series for the first time, or when I see an episode which makes me want to type. CJ and Jed probably have no idea but they often push me out of my TeeVee comfort zone and get me watching shows I would never have discovered on my own.

I deeply enjoy reading their thoughts on shows.. :) Love your work, CJ and Jed..