Inspired by this post by Julie Pippert and also the Wednesday Hump Day Hmmm thingy she’s got going on, I am now going to tell you about my fear of snakes.

I live in Australia. It’s a nice place, but look at it from the point of view of a parent with a child they want to protect. In the sea, we have great white sharks, the blue ringed octopus, stingrays, many things which can kill you. On land, we have several extremely poisonous spiders, and many of the most venomous snakes in the world.

I remember only once putting more than a toe in the sea before the age of eight – I went in up to my knees, but not for long. When I was eight I saw the movie Jaws, much of the footage of sharks was filmed where I lived, in the ocean I could swim in! So you can bet, I never went NEAR the sea for a long, long time.

And now an embarrassing story I’d love to forget but my Mum loves to tell it to everyone. When I was 2, I was making very good progress with toilet training. I also was a sneaky little child who liked to be put to bed and then sneak back out to watch more tv. My parents were watching a comedy show called “The Paul Hogan Show” – containing the Paul Hogan – and there was this skit where a snake flew up out of a toilet and bit someone. I refused to go near the toilet for the next six months. In fact I would not walk past if the toilet door was open. This set the stage for me to grow a very healthy fear of snakes.

As I grew up I never encountered a snake myself, other than at the zoo from time to time, and then it was only to scream at it. There was once a red bellied black snake in our street, but one of the ladies who saw it went and got their car and then ran over it until it was dead. The canteen lady had a red bellied black snake on her doorstep, she called in a snake catcher. I heard stories but never SAW one, even so my fear never went away, and it stopped me from doing a lot of fun things like bush walking. I was too scared to go near anything that resembled nature.

I think all parents in Australia make a choice at some point between scaring their kids so much they will keep away from our dangerous creatures, and teaching them to have a healthy respect for them. I think one of the major factors in this choice is whether *they* are scared of them, or have a healthy respect for them. There were kids in my class whose parents kept snakes, and taught them all about snakes. If I could choose one way or the other, it would never be to make a child fear something, because fear is not an easy thing to get rid of.

So how did it happen that I now have a deep love for reptiles? How can you take such a fear, and change it to adoration and fascination? Education, knowledge, love and time my friends. That, and a partner who grew up in the country and knows all about snakes, an interest in photography, a zoo membership, Steve Irwin (and the snakes all seemed to want to get away from him), the Discovery Channel and Animal Planet, and one very wonderful reptile keeper who I am sure was terrified of me at first because of my enthusiasm. But he loved cameras, and he often invited us photographers to get special shots or he would set them up for us. He and the other half would talk cameras while I would watch snakes.

It all began with the zoo membership. It was just over one hundred dollars and we both could go to the zoo anytime we liked without having to pay. We started going every weekend, sometimes both days, to walk around. The grounds were gorgeous, and we began to make friends with the animals. I was still a little scared to go into the reptile house, but the other half talked me into it one day, and I walked inside to find one of the most beautiful snakes I have ever encountered. 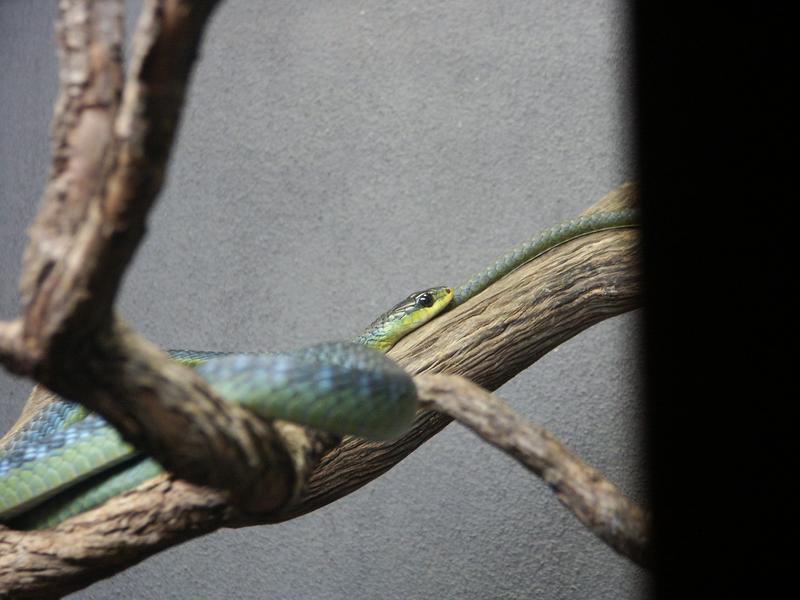 He’s a green tree snake. That picture there is one of the *very* rare times he ever sat still. Each snake does have their own personality and this guy was so endearing and so cute.. I really fell in love. I could stand in front of his enclosure for hours at a time with a daffy looking grin on my face. 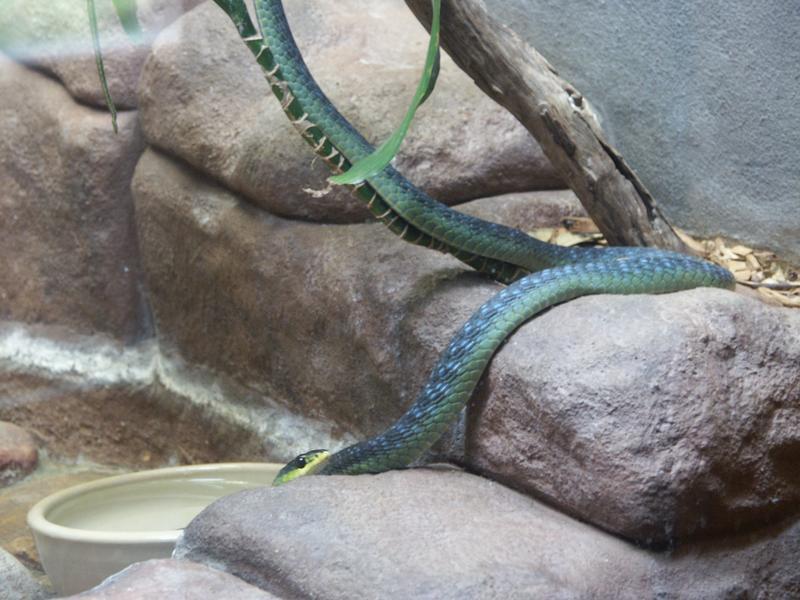 His enclosure was supposed to have a waterfall and a pond in it, but the pond had sprung a leak and it hadn’t been fixed yet, so he would swim little loops in his water bowl.

So as I’ve mentioned before here on the blog, in the life of a zoo volunteer there are days when you get to the enclosures of the animals you love to find them empty. One day I arrived to find a different tree snake in the enclosure. Completely different color, different personality. I bit my lip hard trying not to burst into tears (and I’m doing the same now writing this) and went to find the reptile keeper to ask what had happened, I was certain he was going to tell me my favourite snake was dead.

So I found him and he could tell by looking at me, I didn’t even have to ask. He said “No, your snake is fine, another reptile park had a female the same color and we wanted to mate them, so I sent him off there”. I still miss my favourite snake more than I can tell you, but I soon fell in love with the Forest Cobra because one day he did the Cobra dance for me, and the Taipans became my good friends, and I lost my heart once again to the Taiwan Beauty Snake at Mogo Zoo.

What it really boiled down to, what stopped the fear was learning –

– Snakes would do anything rather than bite you. They’re only going to bite you if they feel so threatened that they have no other choice, or if you accidentally step on them, or if they are in the process of shedding their skin and they can’t see as well as usual.

– Most snakes have a limited amount of venom and they would much rather use it on their next dinner than a human.

– If you give them a chance, snakes will avoid you. Stomp your feet, walk noisily and they will go to find a hiding place.

– If you do encounter one, stand still and let them go their own way. They want to get away from you – watch the Crocodile Hunter, you’ll see what I mean. ;)

I am still scared of spiders, but I am learning more about them.. it’s only a matter of time. ;) I recommend you check out how much membership to your local zoo would be and if you can afford it, get it. I miss my zoo time now that we’re too far from a zoo to go every weekend.

9 thoughts on “Accident of birth – the SCARY country.”