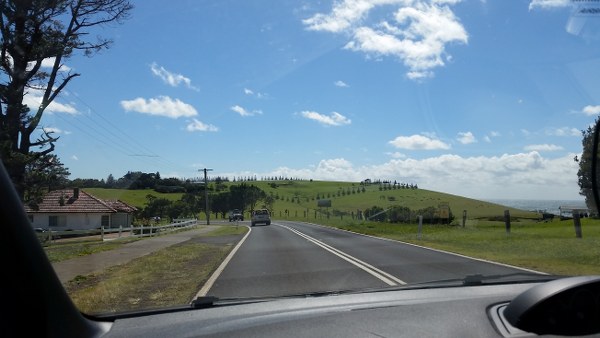 We drove up to Sydney from the South Coast of NSW on an absolutely gorgeous day. We planned a stop at the new car wash at the airport – just near Krispy Kreme and the Maccas and KFC there, as the car had been camping the weekend before and was covered in possum footprints.

Yes, a member of the camping party who shall remain nameless left hotdog buns in their car with the window down. Consequently the possum decided to try and get into all the cars, in case other goodies lived there. Our car did not have a window down, but apparently the possum was unaware of this and kept trying to get in.. 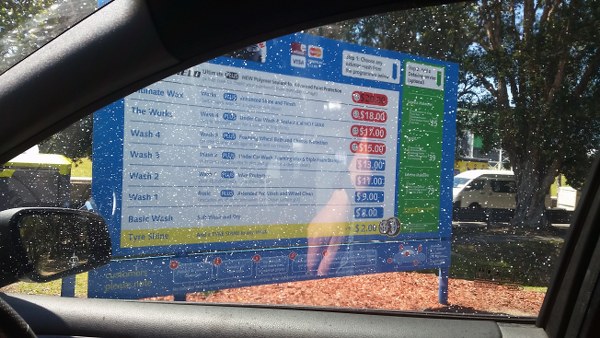 The car wash was excellent – and lucky I took a photo of the sign because now we know they have eftpos, which is handy as I have made a decision to go cash free. But that is a story for another post. :)

On arrival at the Meriton we drove into the carpark, which has some impressive gates that open automatically. We took a ticket and drove in, trying to work out where we could park. Many of the carparks had “SA” painted on them – it turned out these were the right parks to use, for serviced apartment.

We were staying in order to pick up Sephyroth who was flying in from the USA at the airport the next morning. We arrived around 12:30pm on Sunday and were surprised to be able to check in right away, thanks to the lovely Carmen who took excellent care of us. 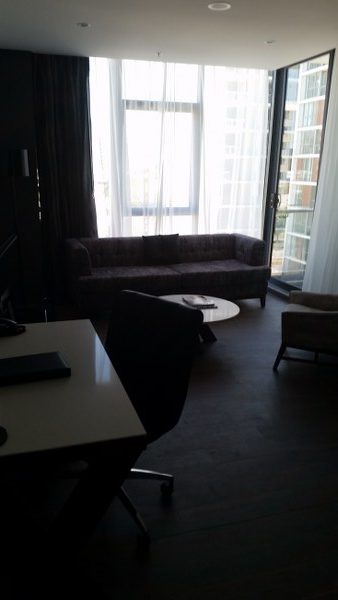 We headed straight up to our room (610) to check it out and drop off some items. The room was excellent – very clean, the bed was comfortable, everything was exactly how it should be. Someone else here said they found the lounge furniture to be hard, we actually found it to be about perfect for us. I especially liked the single stand alone lounge chair.

The day before I had been checking our route on RTA live traffic and I discovered there was a Mascot food festival on the Sunday we arrived. We had been thinking of going to the night noodle markets as the train is so convenient to the Meriton, but we decided to check out the food fair instead. It was very busy and the food was excellent. For lunch we chose chicken teriyaki from Tsuru which was served on a bed of seasoned french fries.

What a fantastic location this Meriton is in. You have everything you could possibly want nearby, a supermarket albeit Woolworths who I broke up with as you may recall, cafes, pizza places, a charcoal chicken place.. There are a lot of eateries some of which do have menus in the hotel book in the room.

The one downside of this location is wind related. Being near the airport sometimes the winds can be quite strong here and the way the buildings have been placed can create a bit of a wind tunnel effect.

You will probably want to bring a jacket for those times you are running out to the local shops etc. I’m not sure how much use the balconies would get on those especially windy days but if it was a calm day we would have sat out there and enjoyed the planes flying by.

After the food fair we decided to use the pool and spa. We went by to check it out first and discovered there is also a steam room. The facilities here are great, and there is a gym as well with all the things you could want. The pool was a bit on the cold side, so we sat in the spa for a while and then tried the steam room which was brilliant. Soooo hot in there, we actually got back in the pool afterwards to cool off. There are towels supplied so you don’t have to use the ones in the room to go to the pool.

The one improvement I would suggest to Meriton Mascot is to put at least two hooks on the back of the bathroom doors. There just needs to be slightly more hanging space in the bathroom and two hooks would do the trick. These mirrors you see hide cupboards where you can store items if you like, the hairdryer is in there as well. 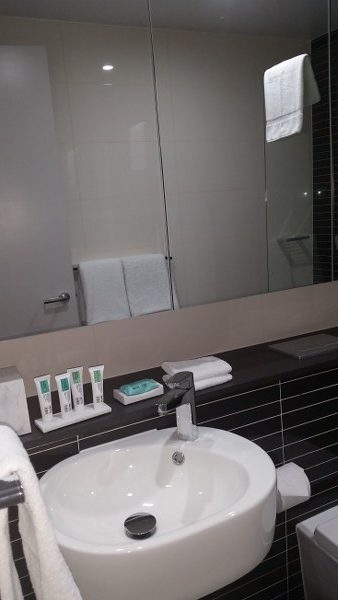 We had afternoon coffee from the in room coffee machine. It is a pod machine which uses pods you can get at Woolworths (Vittorio). We are coffee drinkers who travel with our own Nespresso but we figured it was not worth unpacking it from the car for just one coffee. On tasting the coffee, we changed our minds somewhat but it was too late. 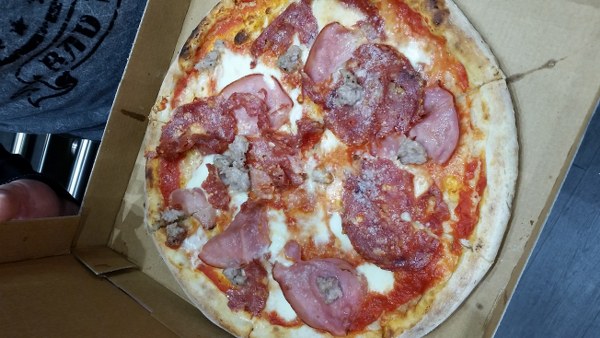 I had seen pizzas from Tavolino at the food fair and that is what we chose for dinner. It was expensive for what we got, but very nice. 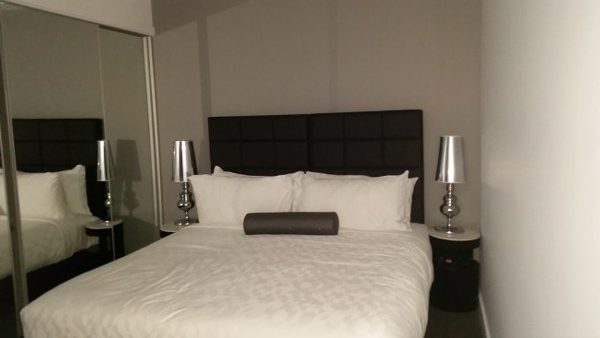 After an early dinner we headed to bed early because we had to be up at 5:30. We slept very well, the beds were comfortable and the pillows were fairly decent. We did not have enough space in the car to pack our own, which we would usually do. We loved the “bed pod” – the room has sliding doors which seem to add a soundproof element to the room.

At around 4am my other half jumped out of bed to run out of the room and turn off what he thought was my phone alarm. It was actually a toilet flush from upstairs. Luckily he was able to go back to sleep fairly quickly and our actual alarm went off at the correct time, so we showered and got in the car ready for our trip to the airport, as our friend had landed and was on his way through customs. 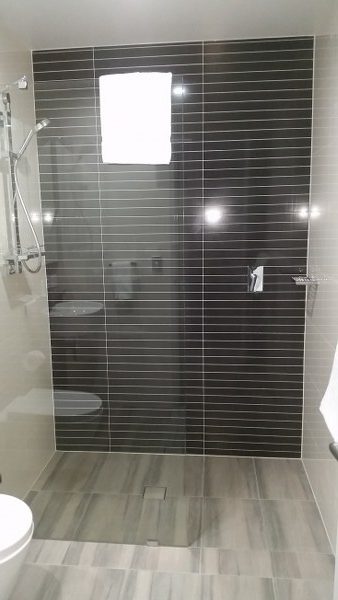 The airport pickup went as planned, we returned to the hotel for Sephyroth to have a quick shower before setting off for our drive. While he was showering, I ran down to Oliver Brown which opened at 7am to grab a couple of mochas and a latte to start the morning off right. I chose the Belgium dark mocha and it was amazing. So much flavour in a cup!

We had already packed everything in the car ready to go before our airport trip, so it was just a quick sweep of the room to make sure we did not forget anything, a quick check out – we had already validated the carparking ticket on check in, so we did not have to spend much time there.

Recent just ok experiences at another airport hotel had us looking for a new place to stay near Sydney and we think we have found it here. We liked that the carpark had a lot of single car spaces – not such a fan of the $25 fee but that is actually cheap for Sydney car parking and it allows you to enter and exit as many times as you like for 24 hours.

I imagine though, if we brought our car for another visit, we would likely park it in the carpark and not take it out until it was time to leave, because everything you could want or need is within walking distance and catching the train into Sydney is a much better option than trying to park in Sydney. 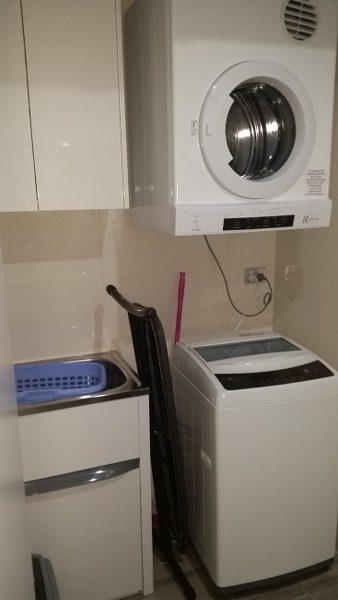 We were only here for one night at the start of our trip so we did not make use of the in room laundry facilities, but it is great to know they are there for future trips.

I suspect this hotel would be an excellent location for Sydney visitors to base themselves for all – or the the latter part if they have an early flight out – of any stay, due to the self catering aspect, the close transport links and the airport shuttle bus.

Overall we loved the Meriton Mascot and would absolutely return for another stay.

Wednesdays will be devoted to travel posts, for a little while. I have many things to share with you! ;)

Next week – our drive from Sydney to the Gold Coast. In one day. Because we are wacky like that. :)