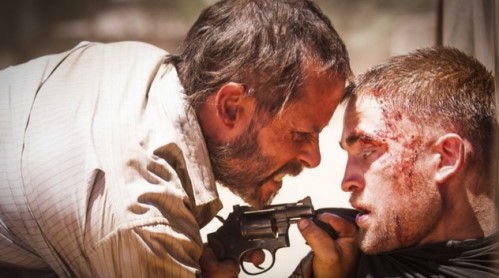 It might be a little known fact about Snoskred, but there are certain actors and actresses whose careers I follow. Wherever they might lead, I am along for the ride. Put two of them together, and I will be at the movies faster than you can blink.

This year, my follow-ment of people – plus the fact it was filmed in South Australia, a place I grew up in – brought me to this movie you may never have heard of. I will not be surprised if you did not hear of it, as it opened in about 2 theatres in Australia. Before I saw the film, the limited release was surprising to me. These are two big name stars that I really love to watch – Guy Pearce and Robert Pattinson.

The premise of the film goes like this – from IMDB – 10 years after a global economic collapse, a hardened loner (Guy Pearce) pursues the men who stole his only possession, his car. Along the way, he captures one of the thieves’ brother (Robert Pattinson), and the duo form an uneasy bond during the dangerous journey.

After I saw the movie, the limited release surprised me only in that it got released at all. The second surprising fact is that the car Guy Pearce is desperately chasing is a Holden Commodore. Me, I’ve always been a Ford girl, so this entire premise is alien to me. I could understand if the car were a Ford Falcon.. :)

The premise above is sort of what happens. I’ll tell you below some of really happens, with some screenshots. Now I might venture into spoiler territory in a little bit here, so I’ll put in a read more tag, and if you want to know more, you’ll have to click through. Plus, this will be a long post with a lot of screenshots.

Of course my saying that assumes you might want to see the movie, and there are two excellent performances here in amongst a lot of nothingness and oddness, but having seen the movie I’ve got to say I wouldn’t really recommend it unless you are a serious fan of one of these two actors. Here’s why.

The movie is set in very depressing and bleak surroundings. This is not the South Australia we know and love – this is Outback South Australia, complete with rusted stuff, buckets of dust and flies.

So, Guy Pearce – hereafter known as Eric, at least for this post – rocks up at a pub. He parks his BLACK car outside. Yes, it looks white in the photo, hello Dust. He enters the pub where there is some very loud and quite odd music playing. He washes his face in a bucket – because dust – and sits down with a glass and a bottle of water.

We cut to inside of a car with three people we do not know at all, who are arguing. We’re not really sure what is going on, but the person in the front tries to attack the person in the back, and somehow the person driving loses control of the car, which crashes past the window Eric is studiously ignoring.

These people who have already shown themselves not to be the brightest bulbs on the Christmas tree, by rolling and crashing a perfectly good car, end up stealing Eric’s car. Eric arrives on the street just in time to watch their dust.

Kthx for the Holden Commodore, Bai!

This makes Eric very angry. He gets into their – surprisingly quite undamaged for just having been rolled – ute, and the chase is on my friends. Eric soon catches up to these nasty car stealing people, and demands his car back. They refuse to give it to him.

A fight ensues, and Eric is knocked on the head and left for dead. We then cut to a quite disturbing and slightly gory image of a soldier dying, which I will spare you. We watch this for a bit too long. We then cut to Robert Pattinson – hereafter known as Rey, at least for this post.

Rey finds himself a nice Army style vehicle, leaving one to wonder, why is Eric so desperate for his Commodore with cars like this just lying about?

Snip some random positioning happenings, which place Eric and Rey in the same general area. Enter some random Aussies whom Eric asks about his car, none of whom answer his questions with actual answers, but with questions of their own, and offers of auto accessories and smooth boys Eric can sleep with.

It is about this time you begin to wonder what the heck it is you are watching, and whether it might be time to stop. However, you have been sucked in by the sheer intensity of Eric. I mean this is a man with a single purpose in mind, and no tempting offers of auto parts or smooth boys will stop him.

However Eric suddenly realises he might get actual answers from these people if he has a gun, so he asks the next randoms he finds if they happen to have a gun for sale. Important safety tip – if you are selling a gun, best not to give it, loaded, to the person you are demanding money from. The gun seller is not long for this apocalyptic world.

Gun in hand, he now gets answers from the people who would only ask questions earlier, and yes his car drove through here. Wise woman asks him why the car is so special to him. She must have noticed it was only a Holden.

Eric returns to his car to find bloody handprints all over the ute – which Rey left. At last Eric and Rey meet. Rey has a raft of questions for Eric, none of which he answers, and they ask questions of each other without getting any answers until Rey passes out. So now, in order to get answers, Eric must find a doctor.

At this point we are only 26:15 into this movie. If you are Australian, around about now you are thinking wow, this movie isn’t going to inspire anyone to visit our country. If you are not Australian, you were thinking I’ll never go to Australia maybe 23 minutes ago. There are so many flies, a lot of dust, and it seems like everyone in the movie has been severely beaten by the character actors who are very odd and unusual looking stick.

Not even Guy Pearce or Robert Pattinson are pretty in this movie, and you have to know that takes some special effort and a shitload of dust. Plus, a hairdresser attacked poor Guy Pearce with a set of clippers and gave him a hairstyle somewhat akin to a sheep who managed to escape partway through the shearing, which was being done by a shearer in a windstorm with a lot of dust in his eyes.

So, a doctor is found, Eric washes off more dust and is just as dusty moments later. General weirdness ensues. Rey wakes up, and if it wasn’t somewhat clear already, this guy Rey is.. hmm.. remember when I said before those three guys were not the brightest bulbs on the Christmas tree? Triple that for Rey. In Australian terms, he is three six packs short of a carton. There are 4 sixpacks in a carton, in case you did not know. :)

And now if you hung in there, you are richly rewarded for your efforts, because Rey and Eric together is like a beautiful ballet of fireworks. Even when they are not saying anything to each other but are just in the car driving along, there is a wealth of riches to be seen. Mucho acting excellence.

And finally we get a shot which is almost beautiful. In between the fly-full shots where you wonder if everyone who lived in outback Australia put out some of those eco-fly traps, would there be a lessening of the flies? They work in our yard and catch a surprising amount of flies in a very short time.

So, stuff happens, of which I will not type, because if you haven’t already noticed, there have been nearly 20 screenshots thus far, and I usually like to limit a post to 10. We fall in love with these two characters but especially Rey. There is a hunting of the car thieves, a confrontation and Eric gets his car back.

And then, comes the scene which absolutely shocked the heck out of me and made the whole movie finally make sense.

BEWARE THERE NOW BE SPOILERS BELOW.

If you are going to watch this movie sometime in the future, please stop reading here.

No, I’m like super serious about this, because the next thing I type and the next image I post will spoil this movie for you.

So, Eric parks his car by the side of the road, opens the boot as we call it in Australia (trunk for those of you from the US), takes out a shovel, walks off with it, finds a good spot, puts the shovel down, goes back to his car and takes out a blanket wrapped object. What is the object?

It is his clearly much loved dog, which he wishes to bury.

And now, we understand why he was chasing a Holden Commodore. Nothing to do with the car at all and of course to those of us who are Ford people, this development makes perfect sense!

I have to say there was a mixture of “what the hell did I just watch” and “now I get it, it all makes sense” once this film was over. I appreciated the acting talents of those involved but had it been any lesser actors than these I would have switched off at the 26 minute mark.