The Light Between Oceans

“A lighthouse keeper and his wife living off the coast of Western Australia raise a baby they rescue from a drifting rowing boat.” IMDB

Prepare the kleenex, you will need them. Oh, what a magical yet deeply heart breaking story with a great cast many of whom you will recognise if you are Australian.

I did not realise going into it that this had people like Garry McDonald and Bryan Brown in it, though that is probably the reason it went onto my “movies I want to see” list. By the time I got to watch it I had forgotten who was in it. What a great surprise for me when the credits were playing at the start, to see those names appear. I am a huge Garry McDonald fan. Had I remembered, I would have watched this movie a lot sooner.

Also Jack Thompson was there as a crusty Aussie seaman, a role I believe he was born to play and should have played a lot more often instead of butchering the American accent as he has been known to do on occasion AKA that time he played the chairman of the joint chiefs of staff in Broken Arrow.

The entire cast was fantastic. Michael Fassbender and Alicia Vikander were especially amazing in this movie, as was Rachel Weisz. I might quietly be turning into a fan of the Fassbender. I also enjoyed Anthony Hayes who has been building up a repertoire of great roles over the years and every role I have seen him in I have enjoyed his performace, particularly memorable was the detective in Animal Kingdom.

I only disliked one thing about this movie and that was a couple of moments of lens flare – a thing that happens when you point a camera at the sun – which broke into the feeling that this was a real story and we were somehow magically taken back in time to the 1920s and suspended in space watching these people live their lives.

I do not mind lens flare on most occasions, in fact there are some times I truly love it, but a movie set in the 1920s before the modern world was a thing is not a good place for it in my opinion. Also pointing the camera at the sun makes it really hard for your audience to look at that shot. :) As you can see from that screenshot I took, my apologies but I wanted to be able to show you what I was talking about. You see the green stripe across the back of the actor there? That is lens flare.

This was not an easy movie to watch at times. It felt incredibly real. At all times minus the few lens flare moments it was beautifully done and the landscapes were haunting.

I would NOT recommend it to anyone who has experienced the loss of a child because this movie explores that subject quite thoroughly from several different angles and it was distressing to me who has not gone through that, I imagine it would be even more so to those who have. 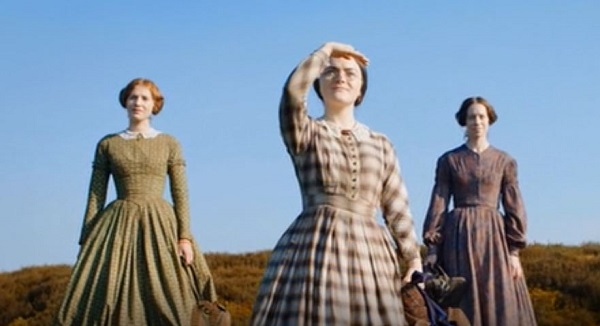 To Walk Invisible: The Brontë Sisters

“A chronicle of the Brontë sisters’ battle to overcome obstacles and publish their novels, which would become some of the greatest in the English language.” IMDB

A couple of minutes into this movie, I very nearly decided to stop watching it. My hand was on the stop button on the remote. The beginning was very, very weird with what seemed to be a supernatural element, fiery halos above some children. I was thinking, what the heck is this?

Then it looked like it was going to turn into a normal movie with normal characters and I decided to keep watching it, only moments later to have another flashback with the same children who I now recognised as the main characters and they were DEEPLY annoying, screaming and yelling. I was just about to turn it off and say this movie is not for me when it went back to the adult characters and stayed there for a long while, and turned into a movie I really enjoyed. I am very glad I did not turn it off now.

One of my favourite books of all time is The Tenant Of Wildfell Hall. I am not such a fan of the other Brontë books to be honest, I am more a Jane Austen fan. Watching this movie and finding out about their brother Branwell now I completely understand why my favourite book was written.

Branwell had an alcohol and drug problem and all three sisters had to watch his decline via this disease and his eventual death with tuberculosis, which unfortunately took two of the other sisters within 6 months of his death, well before their time. It also robbed all of us of their further literary works.

I did not love the ending of this movie either, for unknown reasons it suddenly switched to present day and took us on a somewhat terrifying whirlwind tour of the museum made from the rectory, in particular the gift shop seemed to get quite a visit from a steadicam operator. BYO motion sickness tablets..

But the part in between was excellent and the costumes and locations were quite good also. You may realise by now that I am a great fan of movies that are set in the past especially anything English and from the Victorian times.

I would recommend it if you are a fan of this kind of movie. Just grit your teeth through the first 5 minutes or so, and you can stop the movie once you get to modern times if you like, nothing happens other than taking a nauseating spin through the museum and gift shop and then one final shot of the three sisters out on the moors.

The 9th Life of Louis Drax

“A psychologist who begins working with a young boy who has suffered a near-fatal fall finds himself drawn into a mystery that tests the boundaries of fantasy and reality.” IMDB

Aaron Paul and Jamie Dornan together in a movie? Sign me up, I’m totally on board. Somewhat unfortunately, the two never appear together on screen at the same time in this one. This movie was not what I expected and I would not really recommend it to anyone else.

The ending of the movie and a moment of incredible acting on the part of Aaron Paul redeemed it somewhat magically in my eyes. Even so, it is not a movie I would watch again and I think that puts it on the disliked list for me. Which is bizarre seeing how much I love these two actors.

I was not a fan of the story at all, especially the cruelty to hamsters element. Had that happened earlier in the movie I might have switched it off. I really did not like Louis Drax as a character to begin with but when he began to explain his views on owning a pet, I actively started hating him which was troubling to me, as he was a child. I did enjoy Oliver Platt, but I have enjoyed him in so many things, the most favourite being Oliver Babish in The West Wing.

I think this movie proves that you need more than just great actors – the story overall needs to be something people can relate to. This movie had too much fantasy and at times it skewed to the supernatural or science fiction which I do not always enjoy unless it is done very well.. This was not.

I’ve mentioned before that I do not dislike a lot of movies and I was very surprised to find I disliked this one.